How did bingo start?

Whether you call it lotto, beano, keno, tombola, housey-housey or any of the other old names for bingo, this popular numbers game has been with us a long time. It is said bingo origins can be traced back to 1530 when a lottery known as ‘Lo Giuoco del Lotto D’Italia’ (Italian Lotto – the original name of bingo) was a popular pastime.

So if you’re wondering who invented bingo, the answer is, probably, the Italians. Nevertheless, similar versions of Italian Lotto were also being played in France and Germany. At first, players selected numbers in the hope of matching them with a winning number selection pulled from a drum. But it was the French who first introduced game cards with numbers placed in horizontal and vertical rows, and developed the idea of a line as a winning sequence.

Fast forward to the 1880s and German educationalists, having spotted the game’s learning potential, were busy devising classroom versions to foster spelling and number skills. The numbers were still taken from a tombola drum, and what we would term a ‘full house bingo card’ probably spelt out a word combination or number pattern for the winner.

By the 1920s, the idea of a bingo ‘house’ game was starting to take off in the USA. It was also the Americans who secured the copyright for the word ‘bingo’ and created 6,000 unique game card combinations to give the popular game its mass-market appeal. Then from the 1940s, through the Second World War and beyond, bingo in Britain also flourished. And once the digital age got underway, bingo was one of many popular games which could be played in the online versions available today: a familiar game which appeals because it is both simple to understand and easy to access. 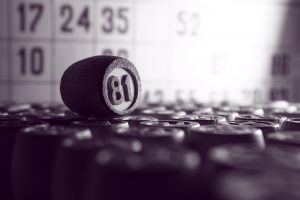 Bingo in the UK

In the Elizabethan era, lotteries were usually the preserve of the rich. But Tudor ale houses still provided a venue where the poorest could try their luck with wagers on simple games. And the early 1700s saw British women beginning to gather together to gamble for low stakes and (relatively) high prizes.

Another early influence was a tombola game legalised on Royal Navy ships from around 1880. Around twenty years later, at the turn of the century, bingo in a rudimentary form – by then known as ‘house’ – was being played by British Army soldiers. Not only was bingo enjoyed by the armed forces in the First World Wa, but it was also used by liberal-minded churches and charities to raise much-needed funds. However, in these contexts, it was more often described as tombola.

How to play bingo in the UK gradually changed through the 1940s and 1950s as the game continued to blossom. By 1960 it had become a game played by people from every walk of life. The Gaming Act of 1968 ushered in a golden age for bingo in the UK. This new legislation largely restricted gaming to public places, meaning clubs could host public bingo games with generous cash prizes. So almost overnight, there arose a great need to find large public spaces to accommodate large bingo-playing audiences.

Dedicated commercial bingo halls in UK towns were a response to the surge in the game’s popularity during the 1960s. Playing bingo in a large hall was an affordable night out with a chance to earn really big cash prizes – especially when larger entertainment companies began linking jackpots on a regional basis. Furthermore, the game had now become a spectacle with colourful and elaborate machines to draw the numbers and bingo callers who injected humour and personality into the job of announcing numbers. Alongside these developments, it was also possible for players to sit, drink and chat throughout the evening, which meant bingo halls added a strong social dimension to the bingo-playing experience.

Online bingo in the UK

Bingo’s popularity was boosted once more in the early 2000s when Microgaming and other software companies developed online bingo platforms based on UK live bingo formats. These sites were fully licensed for all forms of gaming, and within a decade had evolved into casino-oriented facilities offering a full complement of gambling options, including slot games and many new bingo variants.

If you want to play online bingo, you’ll find William Hill offer a host of different formats including titles such as ‘Rainbow Riches’ and ‘Age of Gods’ bingo as well as perennial favourites like ‘Party Bingo’ and ‘Deal or No Deal’ bingo.