Anthony Joshua: How many calories does he consume and what’s his diet?

Anthony Joshua takes on Andy Ruiz Jr. on December 7 in a titanic rematch in Diriyah, Saudi Arabia for the IBF, WBA and WBO world heavyweight titles.

Ahead of ‘Clash On The Dunes’, we take a look at how many calories Joshua consumes on a daily basis in the build-up to a big fight as well as delving into AJ’s in-training diet.

AJ’s usual daily consumption is between 4,000 and 5,000 calories, while during a training-filled day the Watford-born boxer can consume up to a whopping 5,500 calories.

Such a diet, of course, kicks off with a breakfast of champions. Ahead of his fight with Wladimir Klitschko, Joshua’s breakfast before starting training consisted of a large smoothie with yoghurt, fruit, porridge oats and milk, with a second breakfast straight after training involving up to five eggs with wholemeal bread, 500ml apple juice and sometimes smoked salmon or wholemeal pasta on top of that.

AJ may eat breakfast like a king but that doesn’t mean he eats lunch like a prince and dinner like a pauper. No, no – it’s full steam ahead for the rest of the day.

For lunch, in the build-up to the Klitschko fight, he tucked away two large chicken breasts with green vegetables and either sweet potatoes or wholemeal pasta on top of that, while it was a similar affair pre-Povetkin fight.

And after the 30-year-old’s second training session of the day, it’s a recovery shake snack, made with liquid protein containing good carbohydrates, or some bananas.

As for dinner, ahead of the Klitschko fight, it was two large fresh salmon fillets with brown rice and vegetables followed by a desert consisting of fresh oranges and natural Greek yoghurts. His main course for dinner ahead of the Povetkin bout, meanwhile, was steak, green beans and starchy foods.

That would be more than enough food for one day for most people, but not Joshua, who rounds off his day with either some nuts and yoghurt with honey before bed or one of a protein bar, fruit mousse or fruit shake.

As for Joshua’s cheat meal? He’s smart about this one, opting for chocolate that is gluten-free with no sugar, as well as natural honey.

And his diet while he is not in training? Joshua avoids spicy food or food that makes him bloat, stays clear of white rice, gluten and cheese and, seeing as he has to remain at fighting weight, he continues on a good diet. 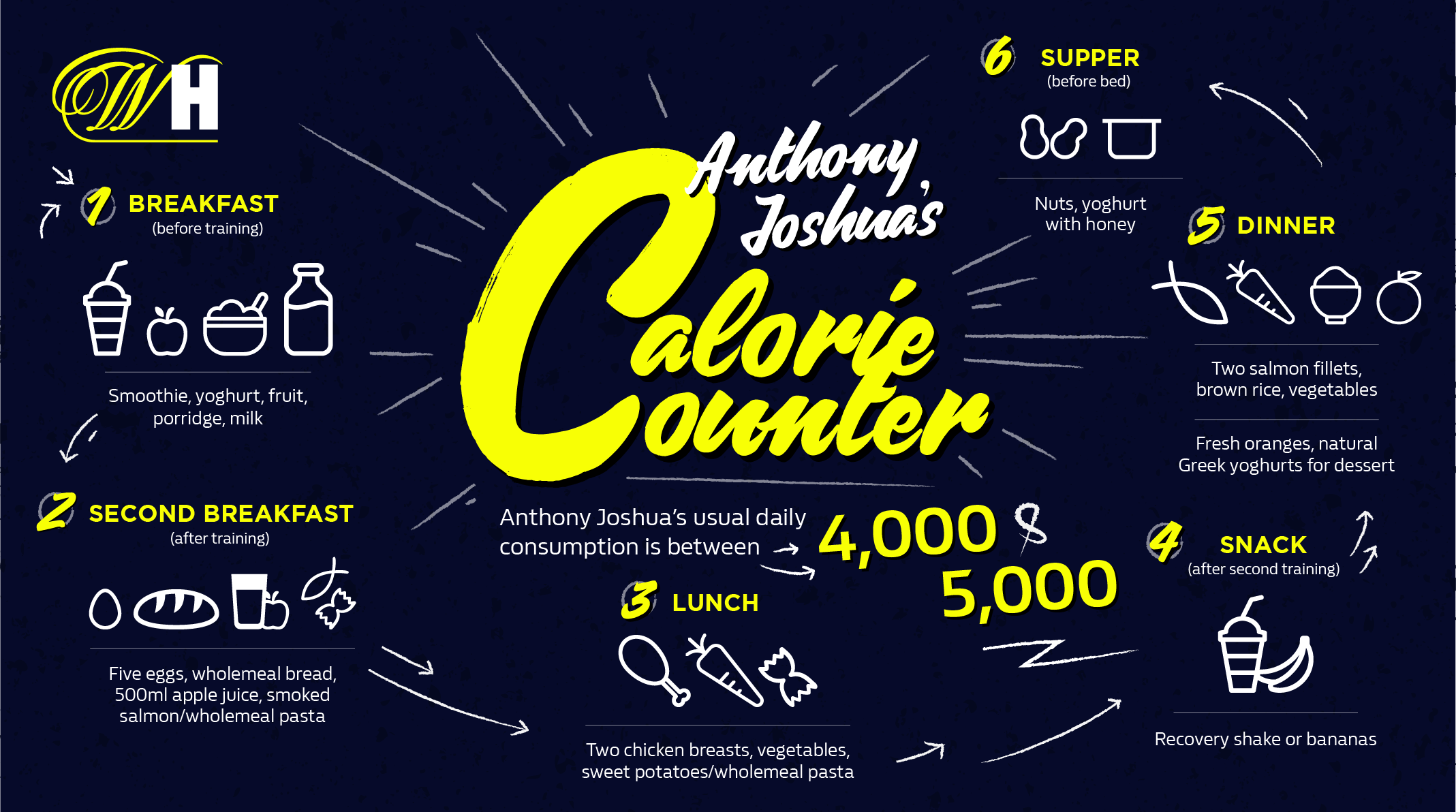