The Final Round | Canelo to come through Bivol test on points

Another week, another big fight, as Saul ‘Canelo’ Alvarez steps into ring on the back of massive wins for Tyson Fury and Katie Taylor.

On Saturday night, Canelo steps back up to light heavyweight to face Dmitry Bivol in Las Vegas for the WBA title.

In this week’s Final Round, David Alorka and Gareth A Davies looked ahead to the fight and reflected on wins for Katie Taylor and Shakur Stevenson.

“I think it’s a really close fight, it’s a really good fight, a great test for Canelo, a proper test at light heavyweight. I don’t think Sergey Kovalev was; I think he was shot when they met.

“Terrific fight. I think Canelo edges it on points and hopefully will see him fight Gennady Golovkin in a trilogy fight in September, which will probably be at super middleweight.”

Canelo Alvarez is odds-on to beat Dmitry Bivol on points, while you can get 5/2 Enhanced Odds on the Mexican winning by knockout. It’s also 6/1 (was 5/1) that the fight ends before the end of the sixth round. 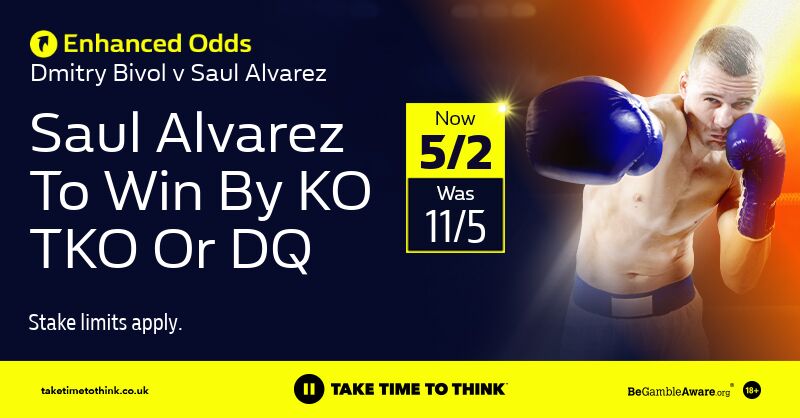 David and Gareth also looked back on a sensational fight between Katie Taylor and Amanda Serrano at Madison Square Garden. And Gareth believes a rematch is on the cards.

He said: “It was an epic, instant classic. It lived up to all the hype. The event was phenomenal. It was a game changer for boxing but also for women’s boxing, I believe.

“It was a spectacular success. The women delivered; they were both extraordinary.

“But Taylor is an extraordinary talent. [She was] almost knocked out in the fifth round but came back in the fight, after dominating the early rounds with her boxing… Serrano in the middle rounds and Taylor at the end, proving that she’s a great, great champion in retaining her Ring magazine and all her undisputed lightweight belts.”

Another boxer celebrating last weekend was Shakur Stevenson and Gareth believes there is plenty more to come from the American.

Gareth added: “Well, I thought Shakur Stevenson was brilliant. Long and loud on the Final Round, I’ve pronounced that Shakur Stevenson could well go on in the next couple of years to be the number one pound-for-pound boxer in the world.

“He’s an extraordinary talent. He bested Oscar Valdez, he dropped him, he dominated the fight, he took Valdez’s WBC title to add to his own WBO title.

“He wants to be the undisputed champion at super featherweight before moving up to lightweight for some super fights with Devin Haney, [Gervonta] ‘Tank’ Davis, with Ryan Garcia, with Vasiliy Lomachenko, with George Kambosos, all these fighters.

“Shakur may be able to best all of them. He’s a very tall, long fighter at 130lbs. But I think he goes up and he could well best everyone at 135lbs. For now, if he wants to unify the belts, he’s got Roger Gutierrez, the WBA champion, and Kenichi Ogawa, the IBF champion.”