The Final Round | Chisora can gain Pulev revenge

A week after Joe Joyce’s fourth-round win over Christian Hammer, there’s another British heavyweight in action this weekend.

Derek Chisora gets back in the ring with old adversary Kubrat Pulev at the O2 Arena on Saturday. Can ‘Del Boy‘ avenge his 2016 loss to the Bulgarian?

This week, David Alorka and Gareth A Davies discussed Chisora’s chances against Pulev and what’s next for rising star Joyce.

Gareth said: “Well, they [Chisora and Pulev] fought six years ago, of course, and Kubrat Pulev, who’s only lost, in a very decorated career, to Wladimir Klitschko and Anthony Joshua, won by split points decision.

“It’s not a fight we wanted. It’s not a fight we expected. But it’s here and you know what? It’s a fun fight. It’s a fight, really, that could have been on the undercard of Oleksandr Usyk and Anthony Joshua as a real warm up in Saudi Arabia on August the 20th.

“But they go at it in London and you know what? I fancy Derek to do it.

“He’s honed. He’s a machine. He’s chiselled. He brings war. They’re both two great characters, two great entertainers and I just have this sneaking suspicion that ‘Del Boy’ is gonna put it on the Bulgarian.”

Chisora is 19/10 to beat Pulev this weekend, and you can get a top price on round betting for the heavyweight fight. 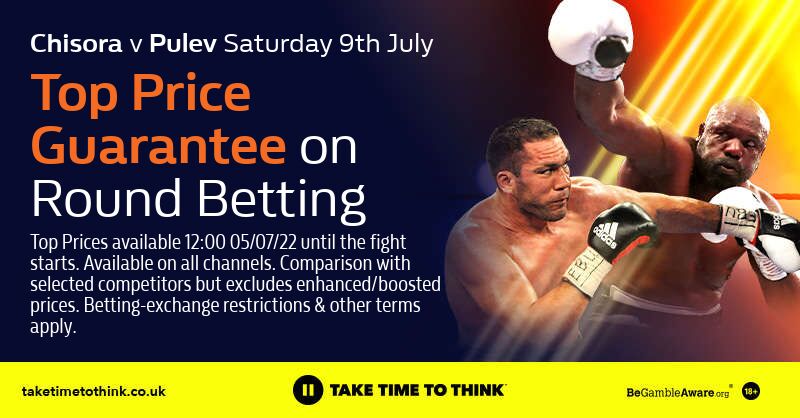 As for Joyce, Gareth thinks he can go right to the top, but feels the 36-year-old needs start making waves outside of the ring to get the attention he deserves.

“I think that fourth-round stoppage just sends another message to the heavyweight division, people like Deontay Wilder and Dillian Whyte,” added Gareth.

“He’s easy to hit but can you put away arguably the best chin in heavyweight boxing? He’s so highly ranked with the WBC – number one, with the WBO – number two.

“He’s there, ready to challenge Oleksandr Usyk or Tyson Fury.

“Joe, forget the fine art and the exhibitions and being bashful and shy, start calling out the big fights. He deserves them. He’s 14-0, hasn’t put a foot wrong.

“He doesn’t want to tread water for too long. I really think that he should shout loud and proud from his pew and say, ‘look if you don’t want to fight, Tyson Fury, vacate the belt let me fight for it’, simple as that.

“Joe Joyce, for me, will be a world champion, but there’s so many great fights for him – Dillian Whyte, Daniel Dubois, Anthony Joshua, Tyson Fury, Oleksandr Usyk – they met in the amateurs and Joe lost to him in the amateurs.

“Joe is a massive and brilliant addition to the heavyweight division.”