The Final Round | Golovkin to edge trilogy fight with Canelo

The trilogy fight boxing fans have been desperate for is finally on its way! In September, Saul ‘Canelo’ Alvarez will get back into the ring with old foe Gennady Golovkin.

After a controversial draw in their first fight in 2017, Canelo won the second by majority decision in Las Vegas a year later.

Now, after four years of fans demanding a third meeting, they will get into the ring again, this time at super middleweight.

In the latest Final Round, David Alorka and Gareth A Davies look ahead to Canelo-Golovkin III, this weekend’s fight between Gervonta ‘Tank’ Davis and Rolando Romero, and what’s next for Joshua Buatsi.

🥊 GGG vs Canelo Alvarez
🥊 Joshua Buatsi vs Craig Richards
🥊 Gervonta Davis vs Rolando Romero@davidalorka and @GarethADaviesDT leave it all in the ring as they discuss the latest boxing news in this week's #FinalRound pic.twitter.com/jhsIjcdScZ

“He [Canelo] has made the right decision in my view,” said Gareth.

“It’s at super middleweight. I think it will help GGG [Golovkin] who, you know, life begins at 40 but weight cuts certainly don’t. That extra eight pounds will be great for him.

“I think the boxing world will probably get behind Gennady Golovkin for this, they’ll want him to produce a great performance. It’s a massive opportunity, if he can win the fight, to go out in a blaze of glory.

“It’s a massive fight, it’s one of the biggest fights in the world outside the heavyweights. Probably the end for Golovkin, he’ll walk away whether he wins or loses.

“[And] I’m giving Gennady Golovkin some great opportunities in this fight against Canelo. I’m going to pick Golovkin to win on points.”

He said: “It’s very much a pre-cursor for the undisputed title fight in Australia between George Kambosos Jr and Devin Haney next weekend.

“Ronaldo Romero, he’s got 12 knockouts from his 14 victories, he’s a young, ambitious fighter. The Tank’s got 24 knockouts from 26 victories. Both undefeated. I think [Romero’s] style suits Tank Davis.

“He’s one of the brilliant stars of the sport. We need to see him in against the very best. He may end up as the best lightweight in the world. Gervonta Davis loves to move and shake and pick his big shots. He’s a jack-in-a-box with speed and tenacity. And I just think the styles are made for him to win this fight. And I have him winning by a late stoppage.”

Gareth’s prediction of a late win for Gervonta Davis, between rounds 10 and 12, is currently priced at 7/1. While it’s 25/1 he stops Romero in the final round. 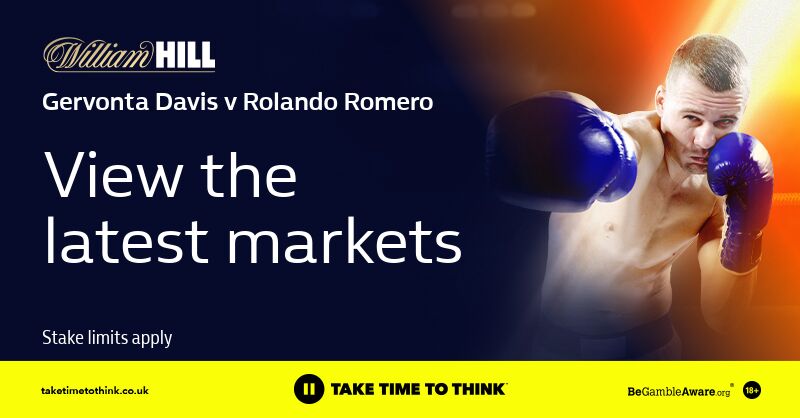 But who is next for the Olympic bronze medallist? Gareth thinks he needs to pick his opponent carefully.

“I don’t think Joshua Buatsi is ready to compete at world level yet,” added Gareth. “Certainly [not] with the world champions.

“If he gets a Dmitry Bivol fight in the interim while Joe Smith Jr and Artur Beterbiev fight, then he’ll take that opportunity, of course he will.

“But we need to see another gear from Joshua Buatsi. I’d like to see a bit more movement.

“If they go the domestic route, [I’d] love to see him in against Callum Johnson, against Anthony Yarde, that’s the fight for me, or even Callum Smith.”

If you’re looking to place a bet on any boxing action, check out our latest boxing betting offers.