The Usyk vs Bellew round betting trends you need to know

William Hill won’t be beaten Usyk vs Bellew round betting odds between now and the opening bell of their cruiserweight world title fight at the Manchester Arena on Saturday.

The first four-belt world boss in the history of the division, Usyk is just 1/6 to best his Evertonian opponent, with the Bomber 9/2 to prevail in his first fight at the 200lb limit since 2016.

Click here to bet on the Usyk vs Bellew fight 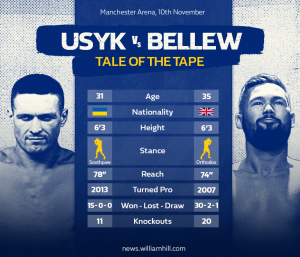 Oleksandr Usyk vs Tony Bellew – the numbers behind the fight.

Check out our Usyk vs Bellew round betting odds

Correctly selecting not just the winner, but the round in which they secure victory offers the prospect of far juicier odds.

To that end, we leaf back through both fighters’ records in the professional ranks to examine their fights for patterns that could lead us towards a winning wager in the round betting odds.

The run of nine straight stoppages with which the Cat began his unbeaten professional career came to an abrupt halt against his first world title opponent Krzysztof Glowacki.

Since then, Usyk has been taken the full 12 threes by three of his five opponents, suggesting, as alluded to here [LINK to other USYK story] that the 7/4 about him winning on points (an option in the round betting) has plenty going for it.

The two world level foes he’s stopped since, Thabiso Mchunu and Marco Huck, both took him deep too, checking out in the ninth and 10th rounds respectively.

Of the Usyk vs Bellew round betting prices on offer about the Ukrainian beating Bellew inside the distance, the sixth, seventh, eighth and ninth stanzas are 14/1 co-favourites.

Why not read our boxing betting guide? 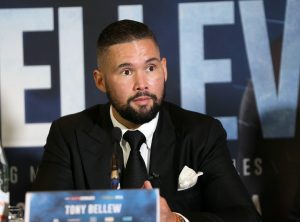 In contrast to Usyk’s resume, Bellew’s recent record is littered with stoppages, with points verdicts dramatically increasing in scarcity since he stepped up from light heavyweight to cruiserweight.

Following the sixth-round KO loss to Adonis Stevenson that precipitated that step up, the Bomber has won all 10 of his assignments, with eight of those victories coming by way of KO and the past two seeing him exhibit his ability to stop opponents at heavyweight.

Even ignoring those last two wins over David Haye, both unsatisfying in their own way, his last two world title fights at the 200lb limit saw him register third round KO wins.

A hat-trick of round three successes at cruiser is trading at round betting odds of a knockout 66/1.

While neither of the vanquished fighters, BJ Flores and Ilunga Makabu, had a record anything like that of Usyk, they had tasted defeat a combined three times prior to crossing Bellew’s path.

In total, the Liverpool pugilist has stopped six of his eight foes at cruiserweight and four of those six wins inside the distance were done and dusted before the bell rung for the end of the fifth.

Victories for the challenger in round five and round six are also both priced up at 66/1.

Our Usyk vs Bellew round betting prediction

The recent lack of knockouts from Uysk and Bellew’s unbeaten record at cruiserweight combine to lead us into the later rounds, if this one is, indeed, to end before the scorecards come in to play.

Given the Bomber is returning to cruiserweight after more than two years outside the division, the 7/4 about the in-the-groove champion claiming a points verdict looks the most sensible pick here, with Bellew’s ability to withstand punishment at a higher pro-weight class seeing him to the bell.