Deontay Wilder is 8/13 to beat challenger Tyson Fury when he lays his WBC heavyweight championship of the world on the line at the Staples Center in Los Angeles, but the Bronze Bomber will enter the ring already well behind on the scorecards for verbal violence.

Wilder has been keen to remind us that he’s “the baddest man on the planet” over the past couple of months, but, against an orator of the Gypsy King’s indefatigable loquacity, such a bog-standard barb can only be equivalent to the wild power shots Fury expects his rival to resort to in the ring.

The Manchester-born member of the travelling community may be the 11/8 bout betting underdog, but, if press-conference pugilism is any steer on the action that awaits, he’ll be having his day in LA.

“He was offered a substantial amount of money to step in when David Haye pulled out a few years ago – and he didn’t take the offer. We made that offer 10 times and now he’s signed with Al Haymon, I don’t think the fight’s going to happen… and it’s because he is afraid.”

Fury proving his prodigious reach applies to pre-fight trash too, with this observation from a presser in the build-up to his clash with Wladimir Klitschko back in 2015.

“Am I under Wilder’s skin? 100 per cent. He’s mentally baffled at the moment. I’m living in his head rent free.”

The first leg of the fight’s three-city press tour had barely begun before Fury had Deontay seeing stars with this Frank Sinatra/squatter’s rights mash-up. 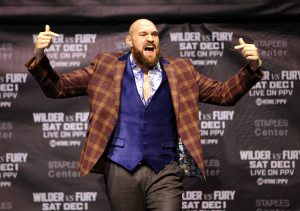 “After I win, he’s going to hire me as his publicist because I do believe I can promote Deontay Wilder back to being heavyweight champion of the world in no time.”

Luckily for the Bronze Bomber, his inspired interlocutor is keen to help him get back to the top after their Staples Center showdown.

“There isn’t a man born from his mother that Tyson Fury is afraid of, and especially not a man who wears pigtails every day.”

Although, he may need to reconsider his hair-do…

“His nickname, for me, gives me the psychological edge, ‘cos he calls himself the Bronze Bomber. That means the third-placed man.”

“He reminds me of Bambi on ice… the guy tries to land that big punch, but when you’re trying to knock people out with every single punch, then if you miss it becomes a problem and you lose your balance and fall over.”

…not to mention his entire approach to the sweet science. Of course, the Gypsy King won’t be offering too much insight on how to improve to his opponent until after he’s executed his masterplan. 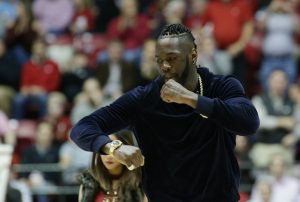 Deontay Wilder points out a potential chink in Fury’s armor

“I’ve got something up my sleeve. I see something with Wilder. And I’m not going to tell anybody until I reveal it on the night. There’s a chink in that armour. Wilder is dangerous. I’m going to take Wilder’s heart away. It’s going to be a more humiliating performance than it was against Klitschko.”

It won’t matter how many bombs Deontay attempts to detonate either, he’s boxing a 6’9” ‘Pretty Boy’.

“I’ve got the Floyd Mayweather heavyweight defence, no one can land a swing on me.”

Fury clearly considers himself far from a jammy dodger, but his teasing may have gotten a bit rich for the Wilder digestive system with this baked-goods-based simile for the Alabama native’s fragile mitts.

“I know he’s got two hands like biscuits – they break very easily – and when they do, I’m going to knock the s*** out of him.”

Bet on all the best Wilder vs Fury betting odds and markets at William Hill, where we won’t be beaten on round betting prices between now and the start of the first round.