Tyson Fury travels well. There aren’t many places where he has fought and not been victorious – Los Angeles is the only destination where the Gypsy King has competed and not won a professional fight.

The bout he failed to win came against this weekend’s opponent Deontay Wilder in their first title fight, although many Fury fans might say it was a win in their eyes.

As Fury looks to see off Wilder and be crowned WBC world heavyweight champion on Saturday, we’ve taken a look at the destinations where the Manchester-born brawler has won his professional bouts, from Dublin to Dusseldorf, in a career spanning 12 years. 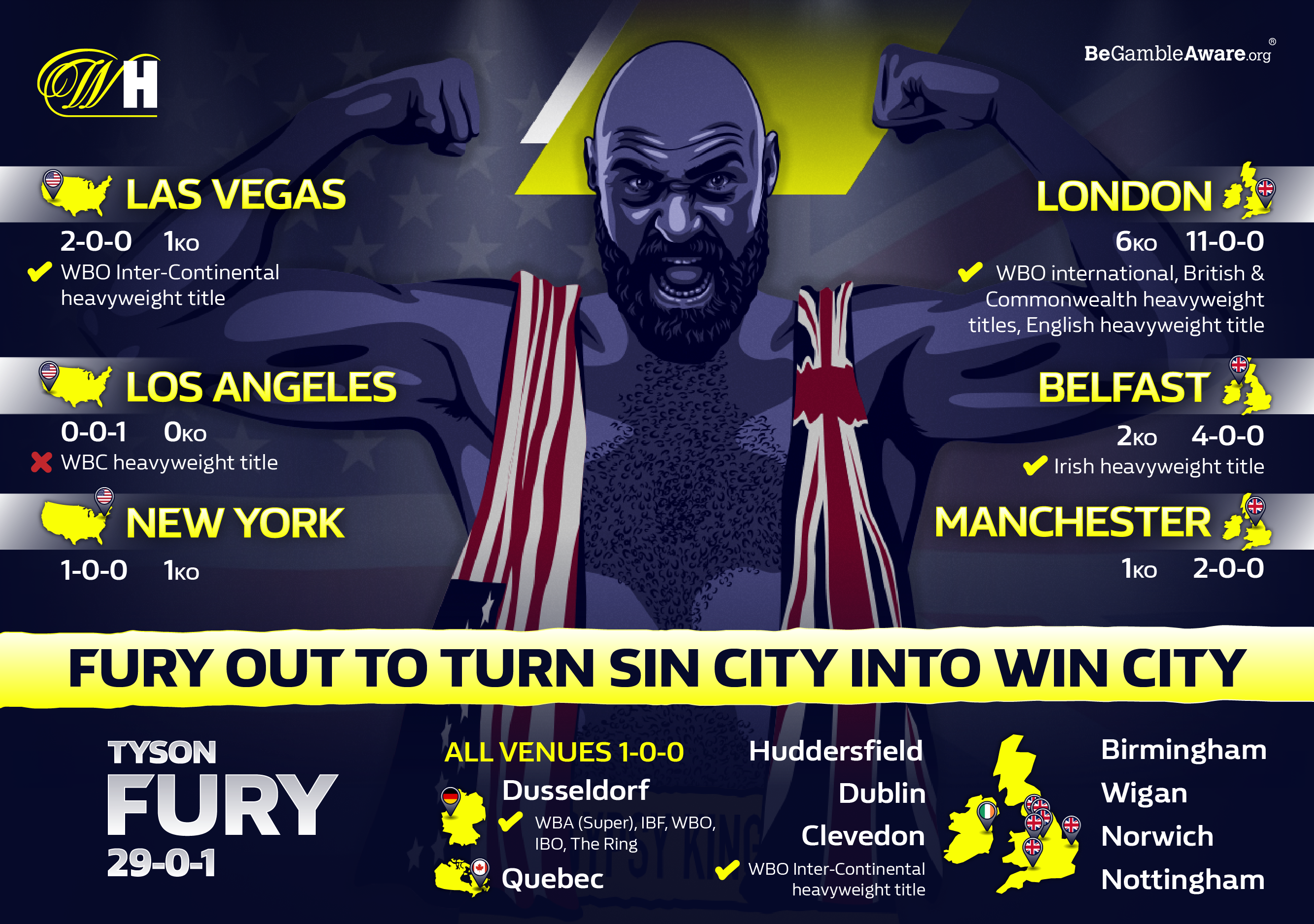 Fury is out to make it three wins from three in Las Vegas when he faces WBC world heavyweight champion Wilder in their title rematch this Saturday.

The 6ft9in British brawler has fought in America four times, failing to win just once when he battled to a draw against Wilder back in December 2018 in Los Angeles, but Vegas has been kind to Fury whenever he’s fought there.

Fury has won both his professional bouts and collected the WBO Inter-Continental heavyweight title along the way in Sin City, and the 31-year old will be hoping to maintain his 100% win rate in the ‘entertainment capital of the world’.

Where other British boxing greats have failed to master the United States, Fury, who also defeated Steve Cunningham in New York, has thrived and should he manage to defeat Wilder in his own back yard in front of the American boxing fans, then it would surely go down in history as one of the best ever wins from a British boxer in the history of the sport.

There’s no other location that Fury has won more fights in than the city of London. The Gypsy King has fought and won 11 times in the Big Smoke, landing victories in arenas as small as York Hall in Bethnal Green during his earlier days of fighting to Wembley Arena, where he saw off fellow British fighter Dereck Chisora.

On top of winning in his hometown of Manchester, where Fury has won twice (one KO), as well as four victories from four (two KOs) in Belfast, the colossal fighter has won once in every other city he’s fought in across the UK, including Huddersfield, Clevedon, Birmingham, Wigan, Norwich and Nottingham.

Away from his familiar UK surroundings, perhaps the most memorable fight that Fury had in Europe came when he defeated Wladimir Klitschko in Dusseldorf to claim the WBA (Super), WBO, IBF, IBO, The Ring magazine, and lineal heavyweight titles.

This ended a decade of dominance for Klitschko, although the win is clouded in controversy given Fury never followed through on the agreed rematch and was then stripped of his belts for failing a drugs test.

Elsewhere, Quebec and Dublin have also been locations where Fury has won convincingly.

Will the Gypsy King keep up his undefeated record on Saturday and make it three wins from three in Las Vegas? He’s Evens to do so, with Wilder the 10/11 favourite.