Whyte vs Chisora 2 round betting odds: The trends that tell us how it ends

You won’t find better Dillian Whyte vs Dereck Chisora 2 round betting odds than the ones at William Hill anywhere before the start of the fight, which is why we’re putting their professional records under the microscope.

Whyte is 3/10 bout betting favourite after shading a split-decision verdict in the titanic tussle that was their 2016 encounter, with Chisora the 5/2 outsider and the draw a 22/1 pick.

For odds of a magnitude more in keeping with this heavyweight showdown, the Whyte vs Chisora 2 round betting is the place to be – scroll down for the trends that’ll tell us how it ends. 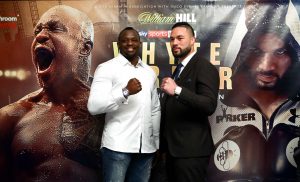 Whyte (l) is the round betting favourite, but are we in for a surprise?

Why not create a William Hill account? We’re offering new customers £30 in free bets when you bet £10 on the boxing action.

A more in-depth look at the Body Snatcher’s record suggests that the power that saw him rock Anthony Joshua when the pair faced off has been somewhat overstated, particularly when it comes to the second half of his bouts.

Whyte’s record of 24 wins, 17 by stoppage, is fairly moderate next to the likes of Joshua (21 of 22 wins by KO) or Deontay Wilder (39 of 40), suggesting odds of 11/8 about a points verdict in his favour could be a solid round-betting odds pick against a rival who has only been stopped twice.

Where Whyte has ended things early in the past, it’s tended to be well before the halfway mark, with 13 of his KO victims handed their marching orders inside the first four rounds and all bar one failing to put ‘em up for the beginning of the seventh.

As a result, the fifth and sixth stanzas could be the danger zone for Chisora, if he is to fail to go the full 12 threes, and Whyte can be backed to win in those rounds at odds of 20/1 and 18/1 respectively.

The Body Snatcher’s sole defeat came by way of a TKO in the seventh against Joshua and William Hill go 40/1 that he’s bounced in the same round by Finchley’s finest.

Click here for the latest Whyte vs Chisora round betting odds 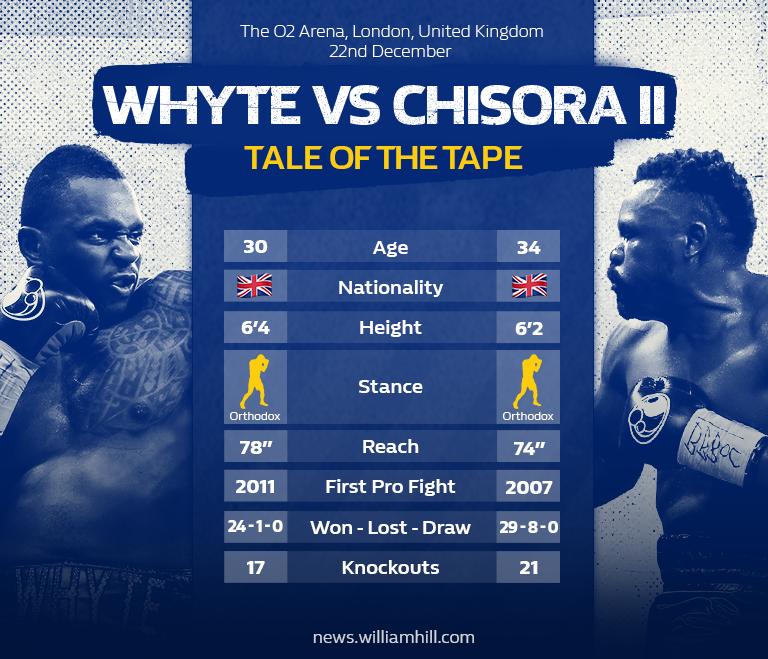 Chisora doesn’t seem to win on points any more

The artist formerly known as Del Boy has lost eight times as a pro, so there’s plenty to go on as far as how Whyte is likely to win is concerned.

Six of those losses came after the bouts had gone to the judges’ scorecards, including against top-drawer rivals such as Vitali Klitschko and Tyson Fury, while one of his stoppage defeats, in a rematch against the Gypsy King, saw him pulled out by his trainer without being knocked down.

Again, this highlights the odds of 11/8 about Whyte on points as the round betting pick if he is to lose.

If Chisora’s to prevail, it’s unlikely that it will be on the judges’ scorecards, despite him having done so on eight occasions down the years, with his 2014 WBA and WBO International heavyweight title victory the sole such success in which any kind of belt was at stake.

His last seven victories have all come by way of KO and a stoppage in the second, a 66/1 shot against Whyte, is actually the round betting pick that’s copped the most often (three times) during that period.

Just as with any other round betting selection, you won’t beat William Hill on the price for that bet anywhere before the fight.

Bet on all the best Whyte vs Chisora 2 markets, including method victory and round betting at William Hill.