The most PDC nine-darters in history

The nine-darter is one of the most coveted achievements in the world of darts, requiring nine perfect darts to be landed exactly where intended without fail.

Such an accomplishment is hard to come by, especially under the pressure on stage, and only an elite collection have managed it at a PDC event.

We’ve taken a look at the top five players to have thrown the most nine-darters in PDC history.

It’s no surprise to see ‘Mighty Mike’ on this list, but he’s also topped it in style. Michael van Gerwen has managed to throw an incredible 24 nine-darters at PDC events in his career, with seven of these being televised.

MVG became the first player to throw a televised nine-darter that did not start with a 180 scored, instead opting for 174.

One of Van Gerwen’s greatest perfect legs was against Adrian Lewis in the 2019 Players Championship finals. A beautifully thrown leg was welcomed with applause from both the crowd and Lewis himself, and in throwing the nine-darter, MVG became the first ever player to sink a perfect leg on the main stage of the competition.

This wouldn’t be a worthy list about darting accomplishments without mentioning the best there has ever been in the sport. Phil Taylor racked up 21 nine-darters during his dominant career on the PDC circuit, with 10 of these being televised.

‘The Power’ sunk his first during the 2002 World Matchplay against Chris Mason, which was the first live PDC nine-darter broadcast on British television, and he didn’t look back after that, with his last coming 13 years later in 2015.

Taylor’s most memorable nine-darter performance came in the 2010 Premier League final against James Wade when he made history by becoming the first player to ever hit two nine-dart finishes in a single match, an achievement only Van Gerwen has been able to match in PDC events. 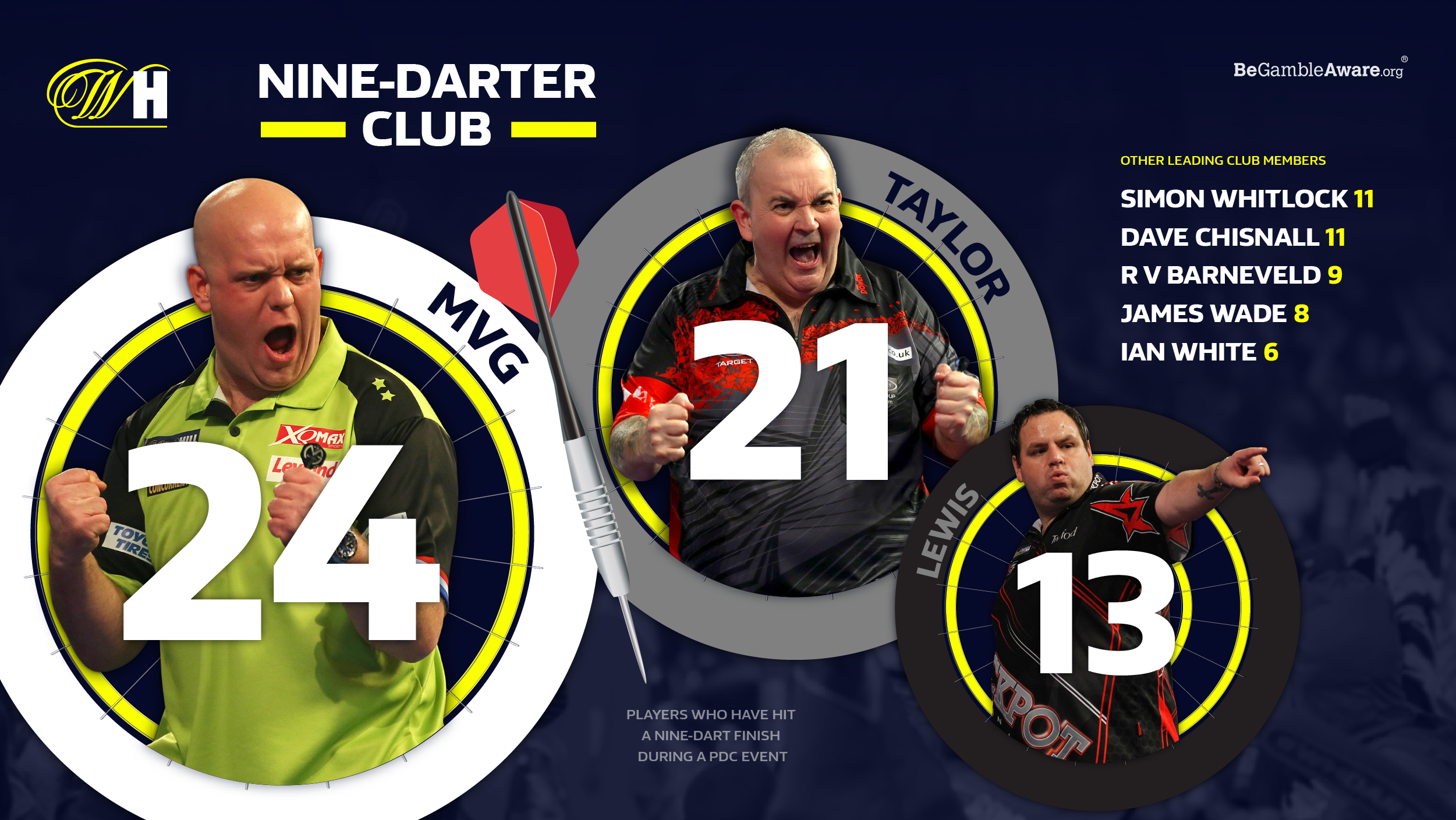 Adrian Lewis is another player that does not shy away from hitting a perfect leg and sits next on our list after racking up a healthy 13 PDC nine-darters, with five of those being televised.

To hit a nine-darter twice on the World Darts Championship stage is a remarkable accomplishment and something that only Van Barneveld has also managed.

Simon Whitlock has managed to throw his fair share of perfect legs throughout his PDC career and he just misses out on a place in the PDC top three, having thrown 11 nine-darters over the years.

Whitlock has only managed to hit a televised PDC nine-darter on one occasion, with that coming against Andy Hamilton in the 2012 Premier League.

Dave Chisnall rounds off the top five after also throwing 11 perfect legs alongside Whitlock, those these two edging out the likes of Van Barneveld (9), James Wade (8) and Ian White (6).

Like Whitlock, Chisnall has also only managed to throw one televised nine-darter, with that coming against current world champion Peter Wright back in the 2015 Grand Slam of Darts. He picked up a tidy £30,000 for his efforts.

Check out all the latest darts betting odds at William Hill