Since the inception of the World Cup of Darts back in 2010, only two nations have ever lifted the trophy.

The Netherlands (11/5 in the World Cup of Darts outright betting) and England (5/2) have divided the prize equally between themselves over the eight years of the competition with four wins apiece and it’s that pair who once again dominate the market.

These two darting powerhouses look set to collide in the quarter finals this year, with Michael van Gerwen teaming up with Jermaine Wattimena for the first time, while England are the number one seeds and will be represented by Rob Cross and Michael Smith.

The quirky pairs format doesn’t look guaranteed to suit debutants Wattimena and Smith, who throw at a fast pace and may struggle to find their respective rhythms as they wait longer than usual to throw.

Bottom half of the draw may contain the value

The bottom half of the draw looks like it could produce a minor surprise, Scotland’s pairing of Gary Anderson and Peter Wright (7/2) will be the favourites to progress as the second seeds.

The tension that existed between the two in years gone by has largely gone away these days and they are two-time runners up in the World Cup in the past. They fell at the first hurdle in 2017 in a shock defeat to Singapore.

Anderson missed the whole of the Premier League with injury and Wright’s form continues to be streaky, with a constant change of equipment a further question mark against him. 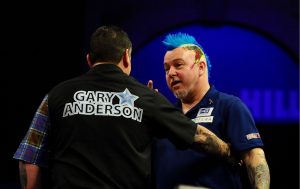 This half of the draw also contains Wales (7/1). Gerwyn Price has risen to seventh in the world and can be relied upon, but Jonny Clayton could be a major weak link for them.

Wales were beaten in the quarters last year and Clayton didn’t have a good tournament, admitting that the pressure of playing for Wales got to him.

With reservations about the obvious two in this half of the draw, the door could be open for Northern Ireland (11/1).

This will be the fourth year Daryl Gurney and Brendan Dolan have teamed up and they made the semi-finals in 2016.

Defeats to the home nation Germany in the last two years have been a touch disappointing, but both matches went the distance and could have easily gone Northern Ireland’s way.

Gurney is now up to number five in the world and the captain had a good Premier League campaign coming in to this. Meanwhile, despite his lowly world ranking these days, the former World Grand Prix winner Dolan always punches above his weight in this event.

They’re passage to the final is not without its difficulties, but Northern Ireland could be primed for a deep run in this year’s World Cup and we could finally see a new name on the trophy.