Peter Wright’s shock elimination during the second round of the William Hill World Darts Championships has thrown the fourth quarter of the draw – and the cherished semi-final place it bestows – wide open.

Wright is the lowest seed to be dumped out in his first tournament match since 2006, following his surprise 3-1 defeat to Spain’s Toni Alcinas.

The result has left Gerwyn Price (5/2) and Joe Cullen (3/1) installed as the shortest prices to reach the semis in the section-four winner odds.

However, at 20/1 in the World Darts Championships betting, Benito van de Pas may prove a value punt if able to put much of his dire form of the last 12 months behind him. 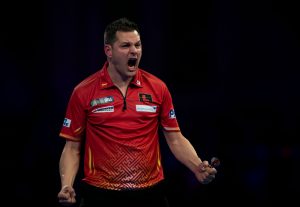 Toni Alcinas – the man that knocked Peter Wright out of the competition – celebrates his win.

The Dutchman has failed to make it beyond the last-16 of a single tournament in 2018 and barely qualified to play at Alexandra Palace, doing so on account of hanging onto his world ranking of 30.

He has remained so high predominantly because said rankings are calculated over a two-year period.

Therefore, Van de Pas needs a good performance at the World Darts Championship heading into 2019 to avoid a major drop down the rankings and with it fewer guaranteed invites into major tournaments.

Such a drop will be especially troublesome given that Big Ben became a father earlier this year.

On a more positive note in terms of performance, Van de Pas has reached the last 16 at Alexandra Palace in three of the last four years, going out 4-2 to Gary Anderson in 2017 despite averaging 102.30. This shows the level of darts the 25-year-old is capable of throwing. 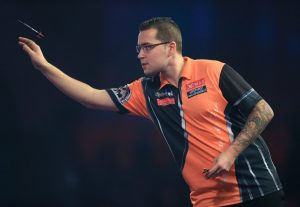 Following his bye in round one, he faces Canadian debutant Jim Long next, who somehow made it through the opening round with an average of 75.33.

Should he beat Long, Van de Pas would meet Alcinas in round three, who is a far less daunting proposition than Wright.

Cullen or Mervyn King are likely to await in round four, with both winnable encounters and then it’s just the quarterfinals, with Price, Kyle Anderson and Ian White the biggest names he could face.

This section of the draw is certainly the most devoid of big names and Van de Pas could conceivably go far without needing to play to a phenomenally high standard.

Obviously, if he needs to, history suggests he is capable and at odds of 20/1 to win the fourth quarter at the 2019 World Darts Championships, it’s worth a punt that everything clicks at Alexandra Palace.