Top-flight football finally makes a return this weekend as we welcome back the Bundesliga – and the signs are that we’re all set for a goal fest.

While some divisions are all but wrapped up, the same cannot be said for the German top-flight as Bayern Munich only hold a four-point lead at the summit of the table.

The Bundesliga has been known for its end-to-end, high-scoring matches over the years, and in fact it has provided the most goals-per-game than any of the top five leagues in Europe.

Clinical strikers from that era have come and gone, such as Pierre-Emerick Aubameyang, Mario Gomez and Miroslav Klose to name a few, while others such as Robert Lewandowski and Thomas Muller continue to hit the back of the net in Germany’s top division today.

However, the likes of those players have played their part in contributing to a league which has provided an average of 2.95 goals per game over the last decade – the highest ratio of Europe’s top five leagues – which also includes the Premier League, Serie A, La Liga and Ligue 1. 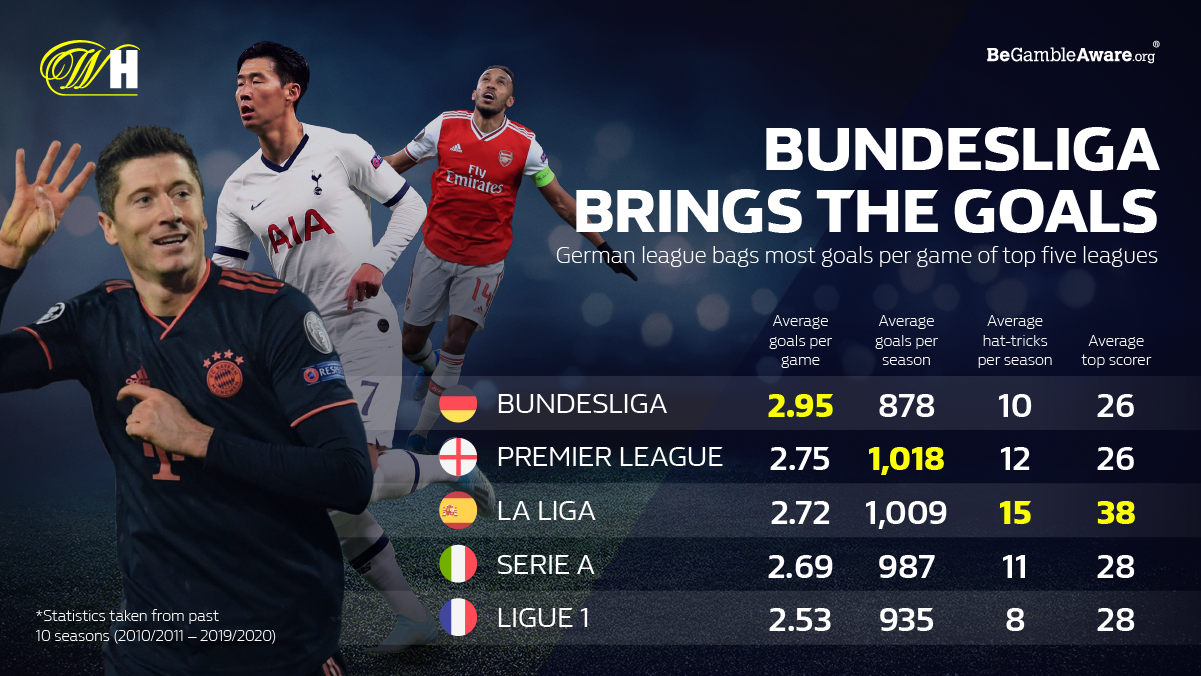 In fact, the Bundesliga was also enjoying a goals-galore 2019/20 season more than any other in the past decade, with an average of 3.25 goals per game in the current campaign. That average is also higher than any of the other top five European leagues.

The English top-flight does lead on most goals scored in a season due to more games being played than the Bundesliga (380 to 306), with an average of 1,018 notched each campaign over the last decade.

Lionel Messi and Cristiano Ronaldo’s reign in Spain over the years has meant La Liga sees most hat-tricks scored each season, with an average of 15 over the last 10 campaigns, compared to England’s 12 and Germany’s 10.

The Bundesliga’s top scorer finishes with an average of 26 goals each season – the same amount as the Premier League’s Golden Boot winning average over the last 10 years. They both trail La Liga, with top scorers in Spain finishing on an average of 38 goals.

One man who will be looking to add to his tally and extend his lead at the top of the goal scoring charts is Bayern’s Lewandowski, who currently has 25 goals in 23 Bundesliga matches this season.

The Pole may harbour ambitions of breaking the legendary Gerd Muller’s record of 40 Bundesliga goals in one season, and he will have another nine matches to do so once the action begins.