Carabao Cup final: Man City out for third League Cup on the bounce

This season’s Carabao Cup has thrown up a fair few thrills and surprises along the way and we’re now down to the final two as Aston Villa and Manchester City meet at Wembley on Sunday.

Ahead of the showpiece event, we take a look at the key bets to keep an eye on.

City manager Pep Guardiola has caused a stir with his negative comments about the competition in the past, stating the cup should be scrapped for the good of English football, believing it causes too much congestion in the calendar.

Regardless of this, you can’t say that Guardiola has not taken the Carabao Cup seriously during his time in England, continuing to field a strong team no matter who City have played while being on the verge of guiding them to three straight wins in the competition – if they win here, they would become the first team to win three League Cups in a row since Liverpool in the early-1980s.

City, who are in their fifth League Cup final in seven years, are naturally red-hot favourites going into Sunday’s game, currently priced at 1/8 to win in 90 minutes, with Villa 20/1 for the upset.

Guardiola’s side will be full of confidence heading into this one following their midweek victory over Real Madrid. Two players who started on the bench for that game, Sergio Aguero and Raheem Sterling, could be set to come back into the team on Sunday and you can get enhanced odds of 7/1 on Aguero and Sterling both to score and each team to get over one card. 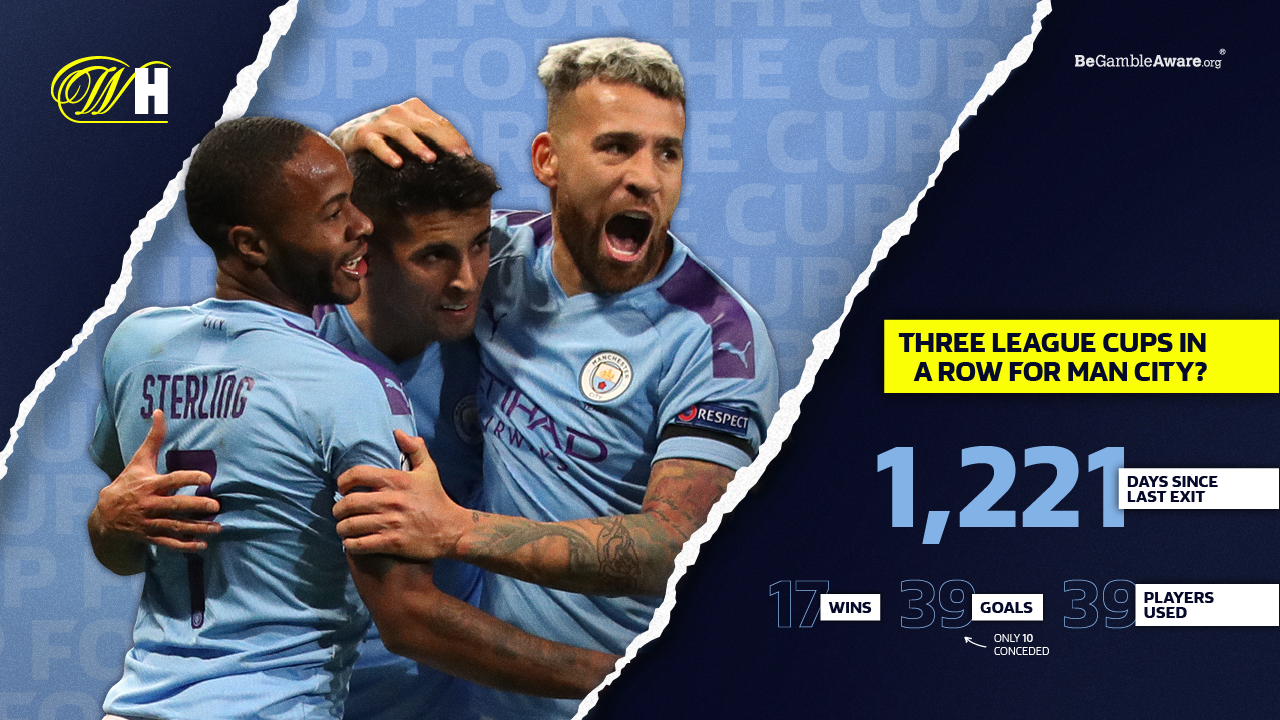 Villa up against it at Wembley

City face a Villa side who are fighting for survival in the Premier League. Dean Smith’s side have had a difficult campaign thus far, having flirted with the drop zone, currently sitting just one point above it.

Jack Grealish has been a shining light in their season, having scored two and assisted two in the four games he’s played in this competition. With the possibility of relegation looming, Villa may put everything they can into this final so they have something to take away from the season.

As mentioned, Villa, who were runners-up in this competition in 2010, are 20/1 for the win and while they are expected to get turned over by a dominant City side, they will be fighting for pride here and won’t lay down and take a defeat lightly. It will be a tough game for them, but the long price does provide a bit of value.

And talking of Grealish, you can get the midfielder to score and Tyrone Mings and Fernandinho both to be carded at the enhanced odds of 80/1, which could be worth a small punt.

Ultimately, though, Guardiola and City will be looking to dominate here and it’s hard to see past them. Backing them -2 at 19/20 looks worth doing, given the confident mood they’ll be in after that Madrid victory.