David Seaman: England can deal with pressure like Euro ’96 side and go all the way

Former England goalkeeper David Seaman believes England can deal with the pressure of hosting Euro 2020, just like the side he played in at Euro ’96, but expects the Three Lions to go further and bring the trophy home this year.

The former Arsenal number 1 played a pivotal role in the Euro ’96 side that reached the semi-final only to lose out to Germany on penalties, and he reckons Gareth Southgate’s side can cope with the pressure of co-hosting Euro 2020 and use home advantage to secure silverware this summer.

When asked if he thinks the current group of Three Lions players can secure success, Seaman was positive in his response.

He said: “I think England can go one step further. The final is at Wembley, and that brings pressure. We had it at Euro ‘96.

“In Russia, there wasn’t any expectation, so the pressure wasn’t on the players and they got to the semi-final. Now there’ll be expectation and there’ll be pressure, but it’ll be good to see how the lads will react to that.

And Seaman believes having a promising group of players early in their England careers will help their bid to win the tournament.

He said: “England have got the potential to win it. If they can play under pressure, which we’ve seen they can in the Premier League and Champions League, then they can handle the pressure of hosting the European Championship.

“Young players all handle pressure well. It’s not until they get into the middle of their careers that they realise what pressure is. When they have to deal with other things, not just football, that’s when pressure starts.

Southgate has already had to deal with losing Trent Alexander-Arnold to injury, who was replaced by Brighton’s Ben White in the 26-man squad, but Seaman believes his old England team-mate got the squad right overall.

He said: “I think Gareth got it just about right. The only one that you’d raise your eyebrows on being left out is Jesse Lingard after the form that he’s been in.

“But when you look at the players in there in that position such as (Mason) Mount and (Phil) Foden, there’s a lot of quality and it’s going to come down to whether or not they can play in front of Wembley in that sort of massive pressure.”

Challenged to name his starting XI for the first match against Croatia, Seaman selected a 4-3-3 formation with pace in key areas of the park.

He said: “There’s tricky decisions because Gareth has quality all over the park.

“I’d go with Jordan Pickford in goal because he’s not let England down at all. He’s getting more consistent with Everton and there’s still the odd little mistake here and there, but as goalkeepers we make mistakes, and he always recovers well. He’s got a little bit of arrogance about him but it’s a good confidence and arrogance, and I like that.

“I’d go with (Harry) Maguire and (John) Stones in central defence because I like a back four. Now with Trent Alexander-Arnold being out, I’d go with Kyle Walker because he just gives so much pace down that right hand side. Then it’s between Kieran Trippier or Ben Chilwell and I think I’m going to go with Chilwell.

“In midfield I’m going with Declan Rice, Kalvin Phillips and then Jack Grealish in front of them.

“On the right side in attack, it’s either Jadon Sancho or Marcus Rashford, but I think I’ll go with Sancho. Then I’d go with Phil Foden on the left and Harry Kane up the middle.” 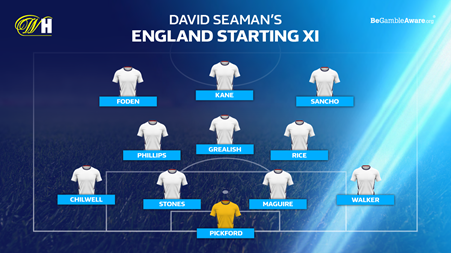 And Seaman also looked a little bit further ahead to the match against Scotland on Friday 18th June at Wembley, in what he believes is a fixture that holds even more rivalry than England versus Germany.

He said: “Even when England play Scotland in a friendly, it’s not a friendly! You want to win the match so much. It’ll be just like when we played Scotland back in ’96. The fans will be really excited for it and I can’t wait.”