Based on the betting, England’s chances of winning the World Cup are fairly promising.

The World Cup 2018 outright market has the Three Lions rated as the seventh favourites at 16/1 to lift the trophy in Russia, with Brazil, Germany, France, Spain, Argentina and Belgium the teams at shorter odds.

This seems relatively justified as it’s a year to the day that Gareth Southgate’s men last tasted defeat when losing 3-2 to France in Paris. They are 10 games unbeaten since, which includes encouraging goalless draws with both Germany and Brazil.

However, recent Opta data that has given a percentage to each nation’s chances of winning the World Cup tells a completely different story.

Brazil top the percentages at 13.2%, with Morocco bottom at 0.6%. These may not be massive surprises, but England’s position might be. 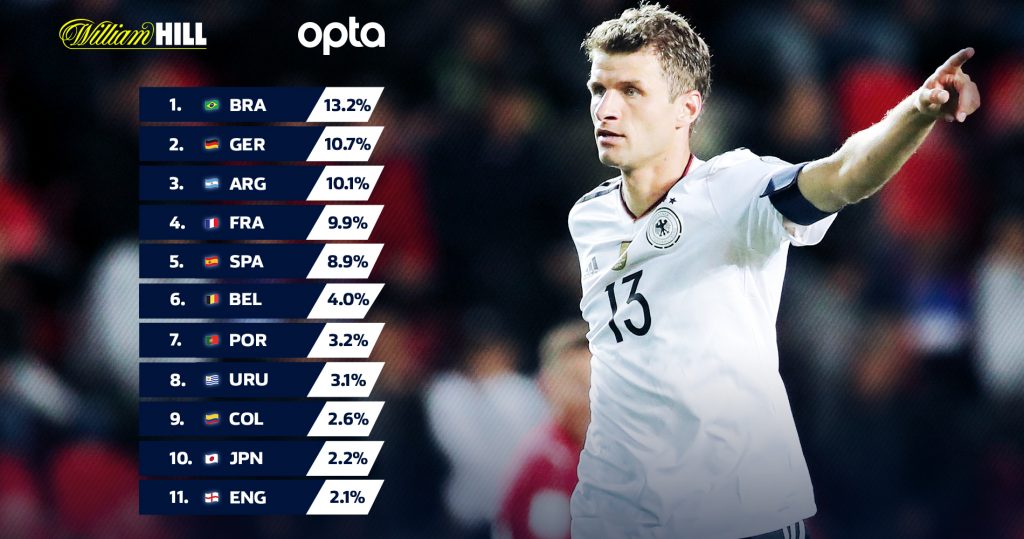 This is the same Japan that are not only 250/1 in the World Cup outright betting, but that are 7/1 outsiders of four to progress to the knockout rounds as Group H winners, behind Colombia, Poland and Senegal.

Japan’s manager Akira Nishino has also only been in the role for two months, meaning he hasn’t had long to enforce his tactics on the squad. Both of the new coach’s games in charge so far have ended in defeats where his team have failed to score.

So it may be best to take the Opta data with a pinch of salt, but if you want to take it as gospel, get on board Japan at 250/1 now as this is clearly a value bet.