With all four home nations in action across Europe this week in their respective Euro 2020 qualifiers, we take a look at how many air miles Scotland, Wales, England and Northern Ireland are having to take on board.

From Russia with love for Scotland

Scotland had a rather torrid time in Moscow on Thursday night, with Steve Clarke’s men slipping to a 4-0 defeat to Stanislav Cherchesov’s Russia side. That result rules out Scotland from automatically qualifying for next summer’s Euro 2020 finals, with the Tartan Army now 12 points off second spot in Group I, meaning it will have felt an especially long journey back home to Scotland last night – though there remains an opportunity to qualify through the play-offs due to their Nations League performances.

Clarke and his players had a rather hefty 1,600 miles to travel back on the flight home to Glasgow, on top of the 1,600 miles it took them to fly out to Moscow ahead of Thursday’s game, meaning they will have racked up a total of 3,200 air miles ahead of Sunday’s match at home to San Marino. Clarke will hope they won’t be feeling too jaded by then.

For Wales it was a 945-mile journey to Trnava ahead of their crucial qualifier with Slovakia, and judging by the result on Thursday night, it was a journey that did not faze them as Ryan Giggs’ side recorded a 1-1 draw – a result that keeps them in the hunt for qualification, leaving them three points off second spot in Group E with a game-in-hand.

That well-earned point means the 945-mile journey back home to Cardiff last night won’t have felt quite as long as it might have on the way out, and Giggs’ side are well positioned ahead of Sunday’s match at home to group leaders and World Cup finalists Croatia despite a 1,890-mile round trip. 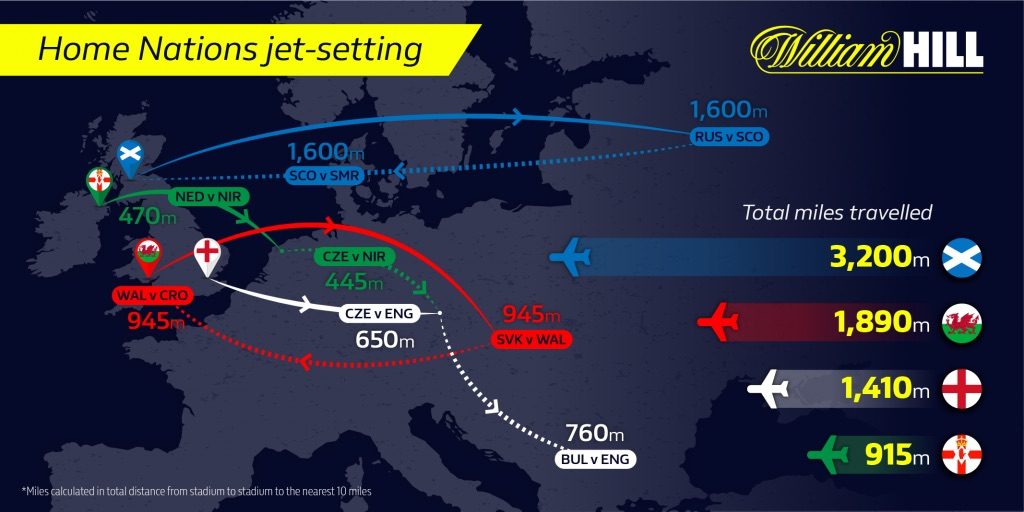 England’s weekend on the continent

It’s a stag do double-header for England this weekend as Gareth Southgate’s side spend Friday night on the town in Prague before dropping in to Sofia on Monday with Group A qualifiers against Czech Republic and Bulgaria respectively.

England come into these games on the back of a 43-match unbeaten run in qualifying and Southgate will be hoping the 1,410 air miles his side will be taking on board as they fly from London to Prague and then on to Sofia won’t get in the way of them extending that record. The Three Lions can also seal qualification to next summer’s Euro 2020 finals in the process with a win in Prague.

Northern Ireland’s shorter but not so sweet journey

Michael O’Neill’s Northern Ireland side have had it relatively easy compared to their home nations counterparts when it comes to travel this week, having had to travel just 915 miles in total for their Euro 2020 qualifier against Holland and friendly against Czech Republic.

The 470-mile journey to Rotterdam to face Holland, however, was followed by a crushing 3-1 defeat which now leaves Northern Ireland in real danger of not qualifying for next summer’s showpiece – they are level on points with top two Holland and Germany in Group C but have a played one game more. O’Neill will hope his side fare better following their 445-mile trip to Prague when they face Czech Republic on Monday.