Free transfer XI: Players set to be out of contract this summer

As the summer transfer window edges ever nearer, clubs around the planet will be looking to pick up bargains. We take a look at a team of the best players who will be out of contract come July.

Walter Benitez joined Nice in 2016 but he barely played for the Ligue 1 outfit in the first couple of seasons. In recent times, Benitez has established himself as the number one keeper after numerous impressive performances. The Argentine keeper has been linked with a move to Leeds in the summer.

Thomas Meunier is one of the biggest free transfer shocks this year. The Belgian has been excellent for PSG over the last couple of seasons, but the contract situation is unclear. Both parties want the same thing but there still seems to be a distance between the talks. If Meunier does leave the French capital, then it will be a bargain for any club.

Tottenham fans will be disappointed if ‘Super Jan’ leaves North London this summer but over the last couple of months, it is looking like they are set to part ways with the Belgian. Vertonghen is heavily linked with his previous club Ajax.

Kurzawa’s agent has recently said that the player was close to joining Arsenal in the January transfer window, but the Premier League outfit opted against the deal. It is believed that the French full back is still on Mikel Arteta’s radar and a deal could be done before the end of the season.

Pedro looked set to leave the west London side in January, but Frank Lampard decided to keep the experienced Spaniard until the summer. The most likely move for the ex-Barcelona star is to Inter Milan where his old boss Antonio Conte is reportedly keeping a close eye on him. 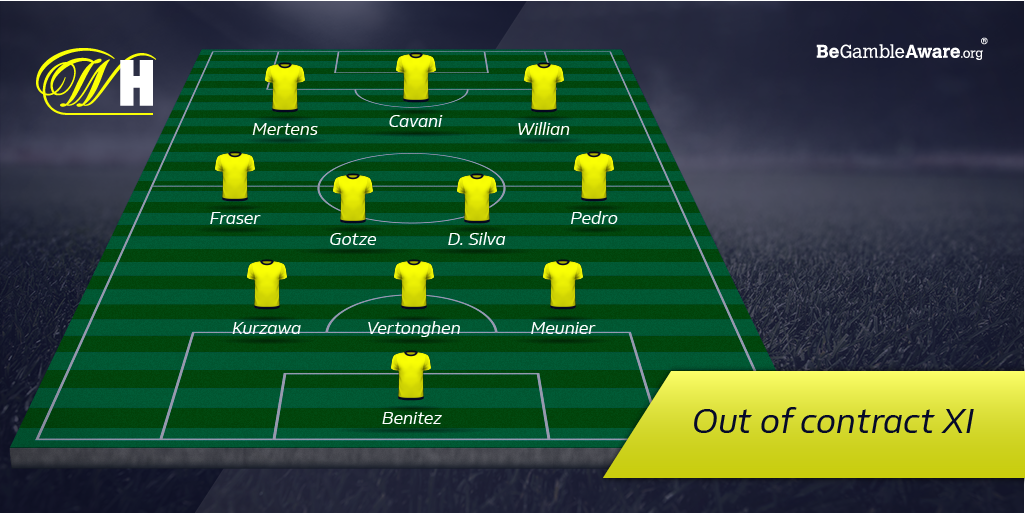 At the beginning of the season, David Silva announced that he would be leaving the reigning Premier League champions after 10 seasons. The Spaniard will no doubt go down as a Manchester City legend but where will the little magician’s next move be?

After re-joining Dortmund in 2016, Gotze has sadly been massively injury prone. The German playmaker is still only 27 years old and plenty of Premier League clubs will be looking to pick him up on a free transfer in July.

Ryan Fraser may be out of contract in the summer but if we are to believe recent reports, it seems as though the flying Scotsman is set to stay at the Cherries this summer. If he decides not to, plenty of Premier League clubs will be interested in securing a brilliant deal.

Over the last two seasons, Willian’s Chelsea future has very much been up in the air, but it seems as if the saga is finally coming to a close. The Brazilian has rejected a contract offer from the Blues but where will he end up? Barcelona? Arsenal? Inter Milan? Time will tell.

Cavani has recently become the first ever PSG player to score 200 goals for the club and after seven years, the Uruguayan is set to leave in the summer. Atletico Madrid are the favourites to sign the talisman.

Dries Mertens decided not to leave Napoli in January because he wanted to become the club’s all-time top goalscorer. A couple of weeks ago, the Italian completed this task and now it seems as though he is ready to move on. Chelsea have been linked with the attacker.

Check out all the latest football betting odds at William Hill.