Liverpool vs Arsenal preview: Can Arteta make it three in a row over Reds?

We preview the action below.

Arsenal set for tough away test

Arsenal haven’t particularly enjoyed facing Liverpool in recent years – that was, until Mikel Arteta turned up. Prior to Arteta’s arrival at the Emirates Stadium, the Gunners had gone a mammoth 10 games without a victory over the Merseyside club – a period lasting over five years. Under Arteta, however, and Arsenal have won two on the bounce, seeing off Liverpool 2-1 in the Premier League at the end of last season, before defeating the Reds on penalties last month to win the Community Shield.

It could of course be argued that there wasn’t too much for Liverpool to play for in either game, but, either way, it’s a sign of the progress the Gunners are making under Arteta that they have managed to stop the torrid run. Arteta, in fact, is looking to become the first Arsenal manager to win on his first away trip to Liverpool in all competitions since Tom Whittaker in December 1947. He’s 11/2 to do just that, with favourites Liverpool priced at 1/2 for the win.

If Arsenal are to upset the odds, they’ll no doubt need to produce an inspired performance – certainly an improvement on their flat display in their fortunate win over West Ham last time out. Despite their struggles against the Hammers, they were still able to record a victory to make it two wins from two this season to keep their confidence up. And that confidence could be enough to help them claim a valuable point at Anfield, with the draw available at 17/5, while Alexandre Lacazette could be the man to inspire them. Lacazette has scored four goals in his last six Premier League games, netting in both of his appearances so far this season, and is 15/2 to score first on Monday. 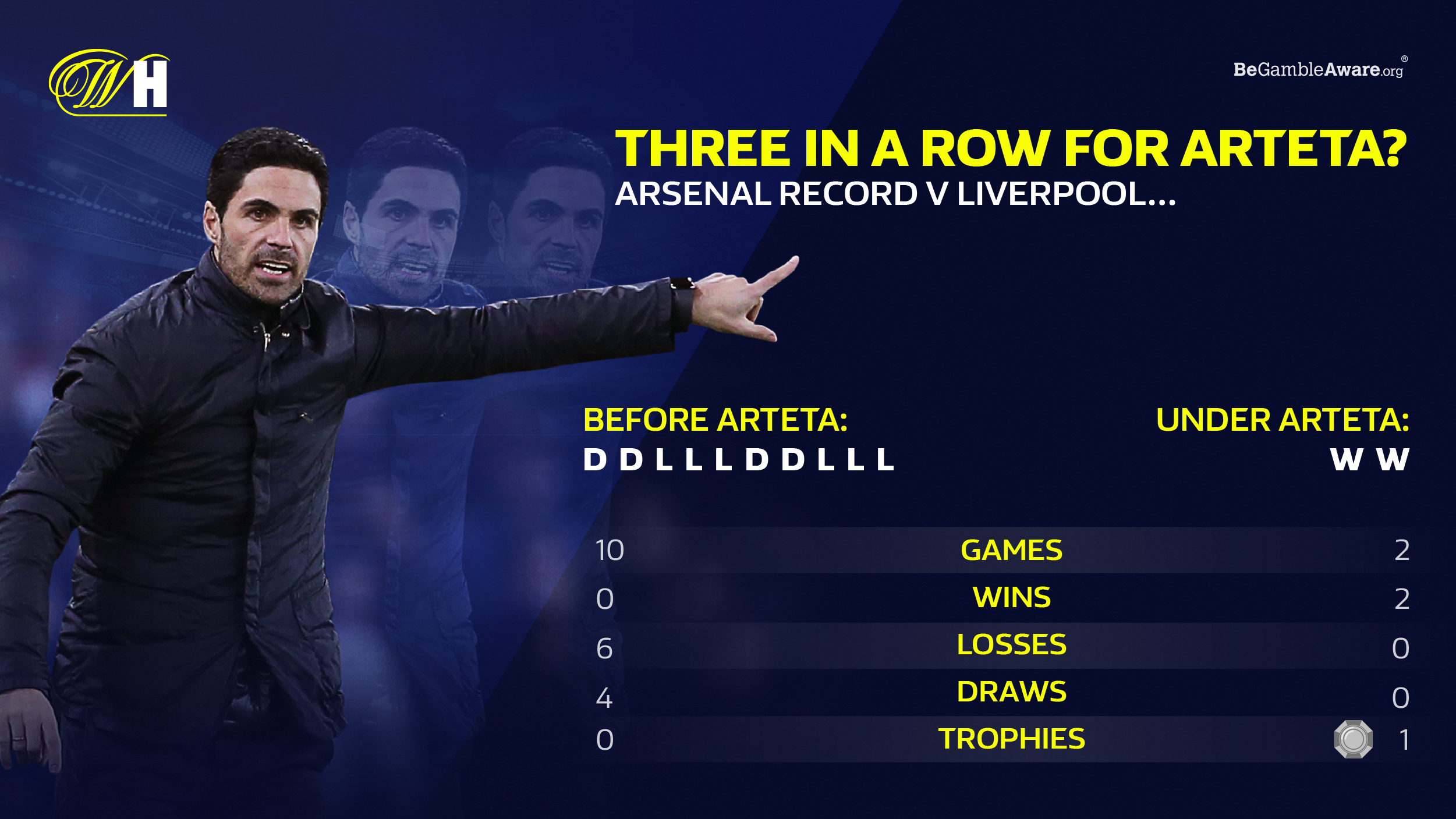 Like Arsenal, Liverpool too have won their first two Premier League games of the season, which adds another layer of intrigue to this clash. While the Reds looked uneasy at the back in their opening-day defeat of Leeds, Jurgen Klopp’s men were back to their best with an authoritative display against title rivals Chelsea last weekend. The Blues did make it easier for them by getting a man sent off, but Klopp was delighted with his side, and should they be at a similar level on Monday, Arsenal are in for a tough night.

As mentioned, Arsenal have mostly had a tough time of things in this fixture in recent years. Liverpool have won their last four home league games against Arsenal – they’ve not won more consecutively against the Gunners at Anfield since a run of seven between 1981 and 1988. When you add to the equation that the Reds are unbeaten in their last 60 Premier League home games, a run stretching back to April 2017, the chances of an Arsenal win look slim.

A score draw is priced at 4/1 and if Arsenal can reproduce the displays they have shown under Arteta against the bigger sides since he arrived then that could be the way to go. Mohamed Salah and Sadio Mane have both enjoyed strong starts to the season and both relish facing the Gunners, having netted five league goals each against the north London side. They are 8/11 and 19/20 respectively to get on the scoresheet on Monday.