It’s almost the weekend – the final one of the Premier League season – which means William Hill’s Super Odds Treble is live.

This week, you can get 13/2 on Manchester City, Manchester United and Burnley all picking up three points on Sunday. 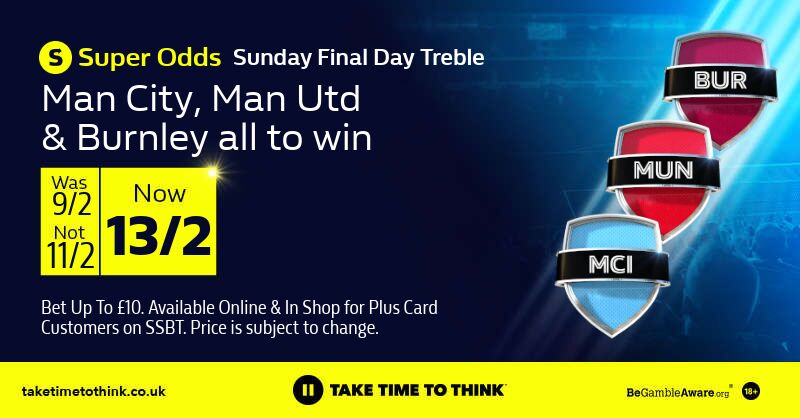 Add this week’s Super Odds Treble straight to your betslip

Let’s take a closer look at the three fixtures:

Manchester City will be crowned Premier League champions with a win over Aston Villa at the Etihad Stadium. It would be an eighth top-flight title for City and their sixth in the Premier League – only Manchester United have won more (13).

History favours City with Pep Guardiola having won the final game in each of his five seasons in charge of the club. The Spaniard is chasing a fourth title in that time.

The league leaders have lost one of their last 27 league games, winning 22, and are unbeaten in 11. At home against Villa, City have won nine of their last 10, including the last six.

Manchester United travel to Selhurst Park knowing they are guaranteed a European place next season.

United have won eight of their 12 Premier League away games against Crystal Palace, drawing the other four.

No side has won more final games of a Premier League season than United (20, level with Arsenal). The Red Devils are unbeaten in their last 11 when playing the final game away from Old Trafford (W8 D3).

Burnley need to match or better Leeds’ result at Brentford to ensure Premier League survival. The Clarets have won three of their last four home games.

Newcastle’s away form suggests Burnley may have a chance. Eddie Howe’s side have lost four of their last five on the road.

Ivorian forward Maxwel Cornet is Burnley’s leading scorer this season, and he’s scored more home goals than any of his team-mates. One more could be enough to keep his side up.