After the group stages of the Champions League and Europa League were all wrapped up this week, it’s time to focus once again on the Premier League – and there’s a cracking set of fixtures to look forward to.

The Manchester Derby is the star attraction as we also preview Chelsea’s trip to Everton.

As we head into Saturday’s Manchester Derby between Manchester United and Manchester City at Old Trafford, the two city rivals couldn’t have had much more of a contrasting week.

United threw Champions League qualification away with defeat at RB Leipzig as yet another slow start this season proved costly. City, meanwhile, reached the knockout stages in style, seeing off Marseille with ease to top their group with 16 points – the joint-most ever accumulated by an English side. What’s more, star man Sergio Aguero returned from injury ahead of Saturday’s mammoth game with a goal.

Pep Guardiola went on to rule out starting Aguero this weekend, but an appearance off the bench seems likely, and the Argentina international is 21/20 to score anytime at Old Trafford. If he does, derby history will be his, with the striker just one goal away from setting the record for most Premier League goals in the Manchester Derby, currently sitting on eight alongside Wayne Rooney.

Despite home advantage, United go into this on as the 10/3 underdogs – and given their home form this season, that’s no surprise. While the Red Devils top the Premier League away table this season with five wins from five, they have just the 17th best record when it comes to home form with just one win from five. City certainly haven’t been at their best this season, but recent games have shown some improvement with two league wins on the bounce. Pep Guardiola’s men are 3/4 for the win and should have too much for United on Saturday. 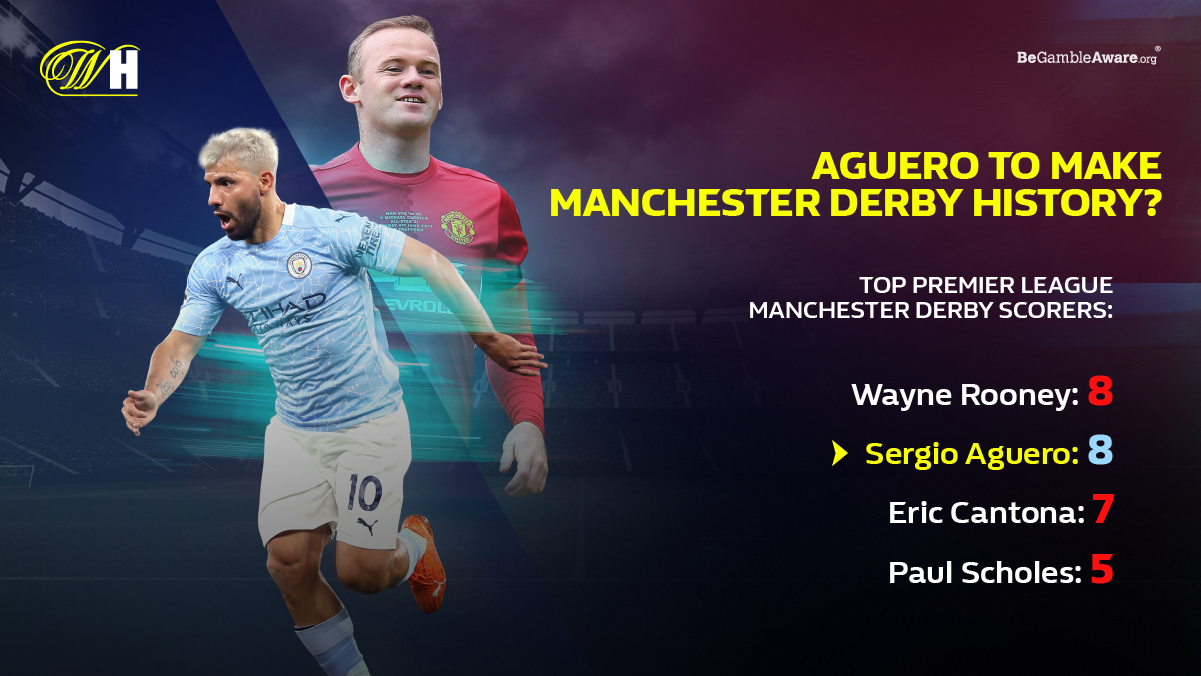 Everton welcome title chasers Chelsea to Goodison Park in Saturday’s other standout game in what is set to be a fascinating affair. The hosts, managed by former Blues boss Carlo Ancelotti, have endured a disappointing and injury-hit spell of late following a superb start to the season, with just one Premier League win from their last six.

In contrast, third-placed Chelsea have looked like the real deal in recent weeks, not losing in the league since September while keeping a glut of clean sheets along the way following Edouard Mendy’s introduction into the team.  In fact, Frank Lampard’s side have kept a clean sheet in each of their last three Premier League away games and are 5/2 to win to nil on Saturday.

The Blues, quite rightly, are the 3/4 favourites here with Everton priced at 10/3. But the Toffees can take heart from the fact that they have won their last two Premier League home games against Chelsea and could make it three in a row for the first time since February 2012. The draw at Goodison Park, priced at 3/1, could be the most likely result come full-time.

Everton can also call on the Premier League’s top scorer in Dominic Calvert-Lewin, who has 11 goals in 11 games – just two fewer than he netted in 36 appearances in the competition last term. The England striker is 9/2 to break the deadlock against Chelsea.