As 2020 comes to a close, Chelsea’s full backs, the beating hearts of Spurs and Manchester United make our leading XI for the season so far.

Read on to see which other top-flight players make the Premier League team of the season from the current campaign.

Edouard Mendy – The summer signing from Rennes has been the standout shot-stopper of the early months and already has six clean sheets so far at the back of a busy Chelsea defence. An impressive start to life between the sticks at Stamford Bridge.

Reece James – Has arguably been Chelsea’s best and most consistent player so far. In the early stages of his career, he is already establishing himself as one of the best right backs in the Premier League on current form. Can he push Trent Alexander-Arnold for a starting slot at the Euros?

Toby Alderweireld – The Spurs stalwart is one of the first names on the team sheet for Jose Mourinho’s side. Solid and reliable at the back, he has made a major contribution towards the north London outfit’s stint at the top so far.

Kurt Zouma – Another goal-scoring centre-back, Zouma is flourishing in this refreshing Chelsea side under Frank Lampard. He looks better with the ball at his feet and is strong in the air.

Ben Chilwell – Already brilliant going forward, Chilwell will be the full package once his defensive work improves, and he’s already quietly becoming one of Chelsea’s most important players. A deadly crosser of the ball and steady in a strong Chelsea defence.

Pierre Emile Hojbjerg – Tottenham’s new rock. Spurs have been without a boss in the midfield for a couple of years but that has all changed now. Mourinho’s new-found general has made a huge difference and adds a layer of steel to Spurs which allows others to roam. Tackling, passing and breaking up play to start those deadly counters are part and parcel of his and his team’s game.

Jack Grealish – It’s not an exaggeration to say Grealish has been one of the best players in the Premier League so far this season. There aren’t many better with the ball at his feet and if he can add a few more goals to his game he will be close to the full package.

Bruno Fernandes – Manchester United have become so reliant on Fernandes to get them out of sticky patches, and more than often he delivers. He’s quickly become their leader and his final third play continues to impress. One of Manchester United’s best signings of the century.

Heung-min Son – Mourinho has got even more out of Son in recent months after a quiet end to last season. Spurs’ counter-attacking style suits him down to the ground and he’s a lot quicker than people think. His finishing is much improved this season, and he’s linked incredibly well with his teammate Harry Kane.

Harry Kane – Which brings us on nicely to another Spurs player who has made the team. Kane brings goals, assists, defensive work, leadership qualities and more. People questioned whether he could play under Mourinho and that has quickly been put to bed. Still the best striker in the division and an easy pick for the team of the season so far.

Dominic Calvert-Lewin – The Everton talisman has been a revelation this season under Carlo Ancelotti. There aren’t many better in the air and he could well drag the Toffees into the top four if he keeps up the form he’s found in this campaign. 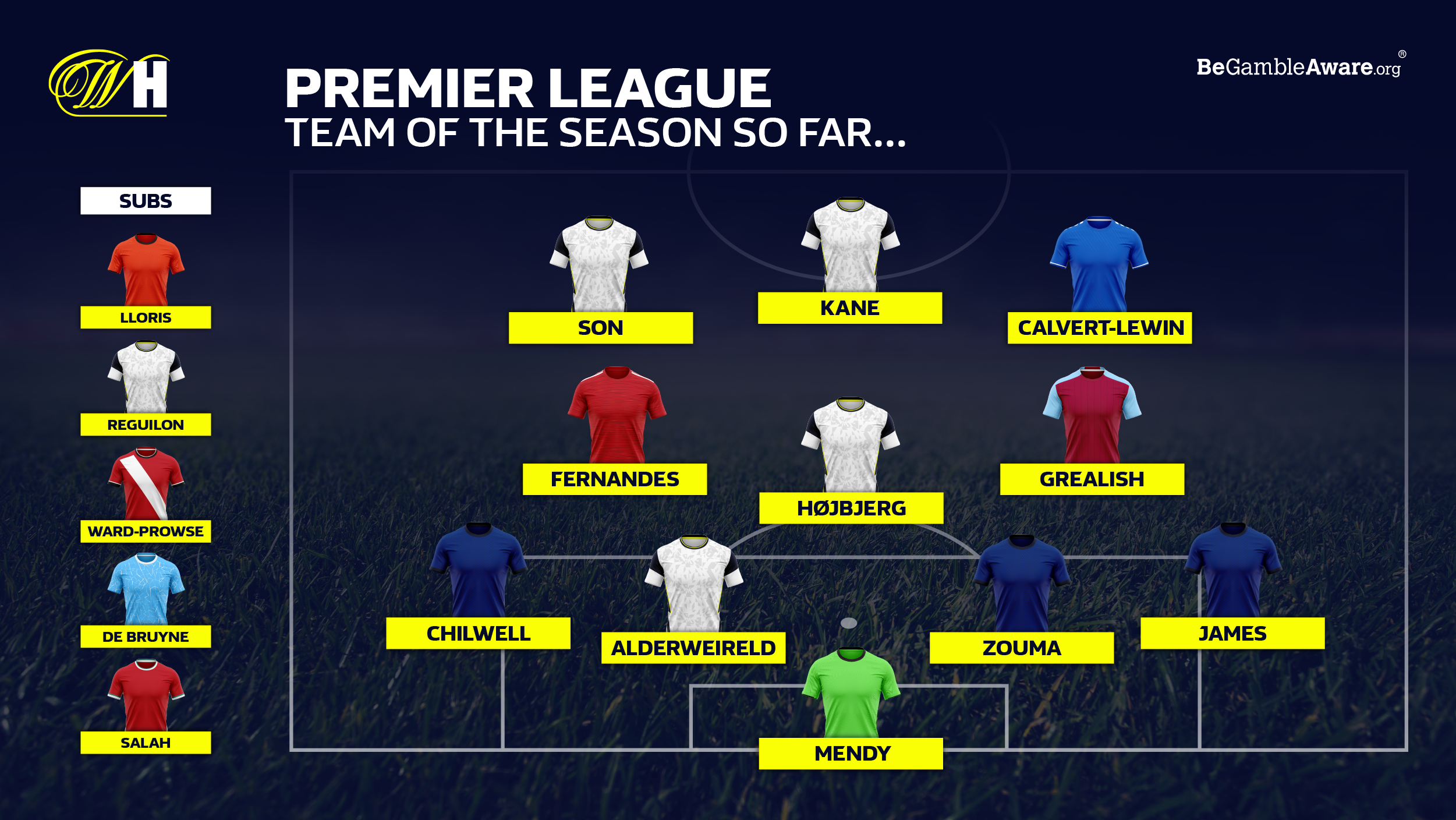 Hugo Lloris – The Spurs captain has been a key cog in Mourinho’s defence and with his leadership and calming aura.

Sergio Reguilion – His crosses and his defensive attributes have added a new dynamic to the Spurs defence. His desire and passion to run all day have endeared him to the Spurs faithful and it’s easy to see why.

Kevin De Bruyne – Manchester City are yet to reach top gear this season but everything good comes from the Belgian. They miss him when he’s not there. Right and left-footed, his crossing and passing is as good as it gets. When Sergio Aguero gets fit you will see his stats rocket even higher.

Mohamed Salah – Quiet at times due to a few niggles this year, but Salah has burst into life in recent weeks as Liverpool’s injury toils mount up. His class can never be questioned, however, and he’s perhaps unlucky not to make the first XI.

Diogo Jota – A shrewd signing from Jurgen Klopp in the summer who will be key in lightening the load for Liverpool’s fantastic trio of Salah, Roberto Firmino and Sadio Mane.