Manchester United went from as short as 1/7 to 500/1 to qualify for the Champions League this season in the space of less than nine months, our research has found.

Via a moving graphic which plots those clubs battling for a place in the Premier League’s top four, we have tracked how the Red Devils went from virtual certainties to be playing in the Champions League next season to having no chance after one of their poorest league campaigns in living memory.

United were 1/7 in late September, when, despite losing to Aston Villa, they were four points clear of Spurs and seven ahead of Arsenal – the two sides many expected them to be competing against in the race for European qualification. However, since then things have not gone quite to plan, and as their league position has suffered, so has their price on a top-four spot.

So close yet seemingly so far for Arsenal

Few expected Arsenal to qualify for the Champions League this season and those estimates appeared correct with the Gunners as big as 12/1 for a top-four spot in late August. Since then, though, Mikel Arteta’s side have improved and hopes of a return to the Champions League for the first time since 2017 looked likely.

They were 2/1 at the turn of the year but were consistently backed throughout the beginning of 2022 and were 1/2 on 7th March and even shorter at 1/3 on 1st May. However, since then it has been downhill for the north Londoners, who, after losing to bitter rivals Spurs, were pushed right out to 18/1 and it’s clear their top-four hopes hang by a thread. 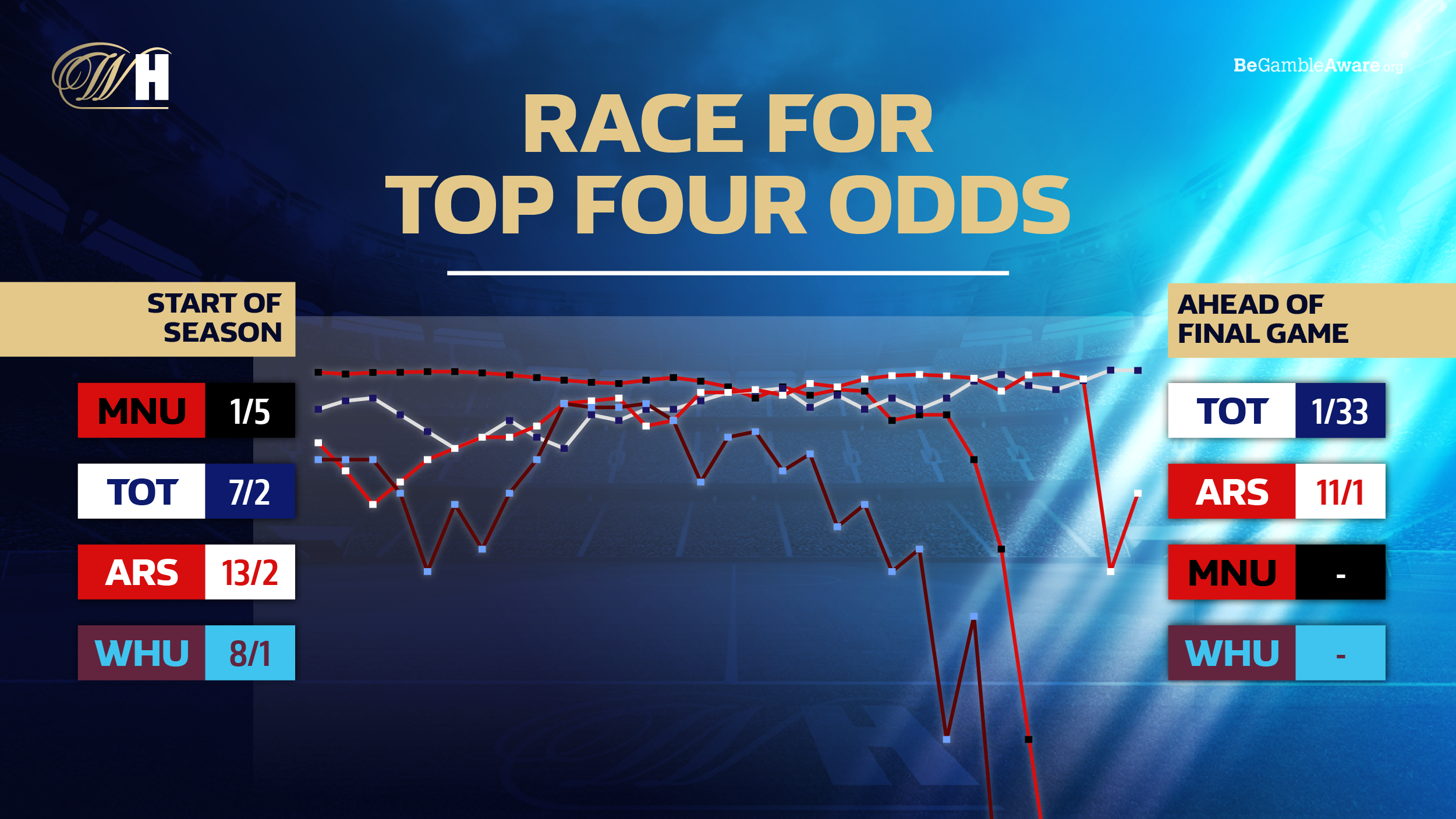 Spurs appear to have timed their run to perfection

As Arsenal’s top-four hopes look to have sunk, Spurs, in contrast, seem to have timed their run for Champions League football next season to perfection.

Things looked challenging when they were 11th in the league in late September and their odds of 7/1 for the top four reflected that. Under new manager Antonio Conte, however, performances have improved greatly, particularly in 2022.

Spurs were the same price as Arsenal at 2/1 at the start of the year, but their price has gradually decreased, going odds-on for the first time on 10th April. It was a close contest between Spurs and their north London rivals until 12th May when a win over the Gunners, followed by Arsenal losing to Newcastle, saw their price shorten dramatically to 1/100.

And while there could be a few more surprises on the final day of the season, it looks as if Spurs might be the ones to emerge victorious in what has been one of the most unpredictable races for the Champions League in recent memory.