The Premier League is back for the 2022/23 season, and here’s the first Super Odds Treble for the top-flight campaign.

This week, you can get 7/1 on Spurs, Aston Villa and Leeds all starting the season with three points on Saturday. 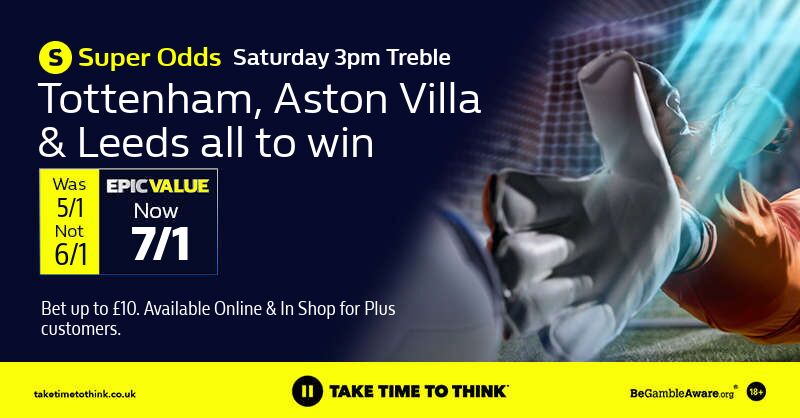 Add this week’s Super Odds Treble straight to your betslip

Let’s take a closer look at the three fixtures:

Spurs open their campaign at home against Southampton. Antonio Conte’s side have won their first league match in six of the last nine seasons and have won 15 of their last 20 Premier League home games against the Saints.

Harry Kane (11) and Son Heung-min (10) love facing Southampton. In fact, only Alan Shearer (14) has scored more against the Saints than the Spurs pair.

A further boost for Spurs will be the fact that Southampton have won one of their last 12 league games (D2 L9), losing their last four. The Saints are also on the longest winless run on the opening day among current Premier League sides (8), losing all three under Ralph Hasenhuttl.

Steven Gerrard had the edge over Scott Parker in their playing days, winning nine of their 15 Premier League meetings. Will the Villa boss be celebrating when his side play Parker’s newly-promoted Cherries?

Villa have only won one of their five previous games when they’ve started a Premier League season against a promoted side. However, that win came against Bournemouth in 2015/16.

Philippe Coutinho could be crucial for Villa. The Brazilian playmaker has a good record against Bournemouth. In his last two Premier League games against them, he’s scored twice and provided one assist.

After surviving on the final day last season, Leeds start the new season at home to Wolves. The Whites have only lost two of their last 16 opening top-flight matches.

Leeds boss Jesse Marsch also has a good record in the opening game of a season. The American has won four of his last five with various clubs.

Meanwhile, Wolves are on the longest winless league run of all current Premier League sides (7). They have lost five of those seven games and haven’t kept a clean sheet in any of their last nine.