The changing cost of being a World Cup supporter

Remember the good old days when a packet of Panini World Cup stickers cost just 30p? When a pint cost just a couple of quid and an England shirt could be bought for less than £40?

Us too … just about!

As we celebrate the start of the 2018 World Cup, we wanted to look at how the pricing of World Cup staples has changed since the turn of the Millennium; where prices sit today compared to the 2002 World Cup in South Korea and Japan and what they should look like when adjusted for inflation using the Retail Price Index (RPI) and Consumer Price Index (CPI).

Whether you’ve travelled (or are travelling this summer) to support England in the World Cup or simply watch the matches down your local with a pint; we’re confident there’s something here which you can relate to.

We’ve looked at the historical price of:

We also wanted to understand what we may be paying for these things in years to come and, based upon the average price change and rate of inflation since 2002, we’ve projected out the cost of these up until the 2030 World Cup. 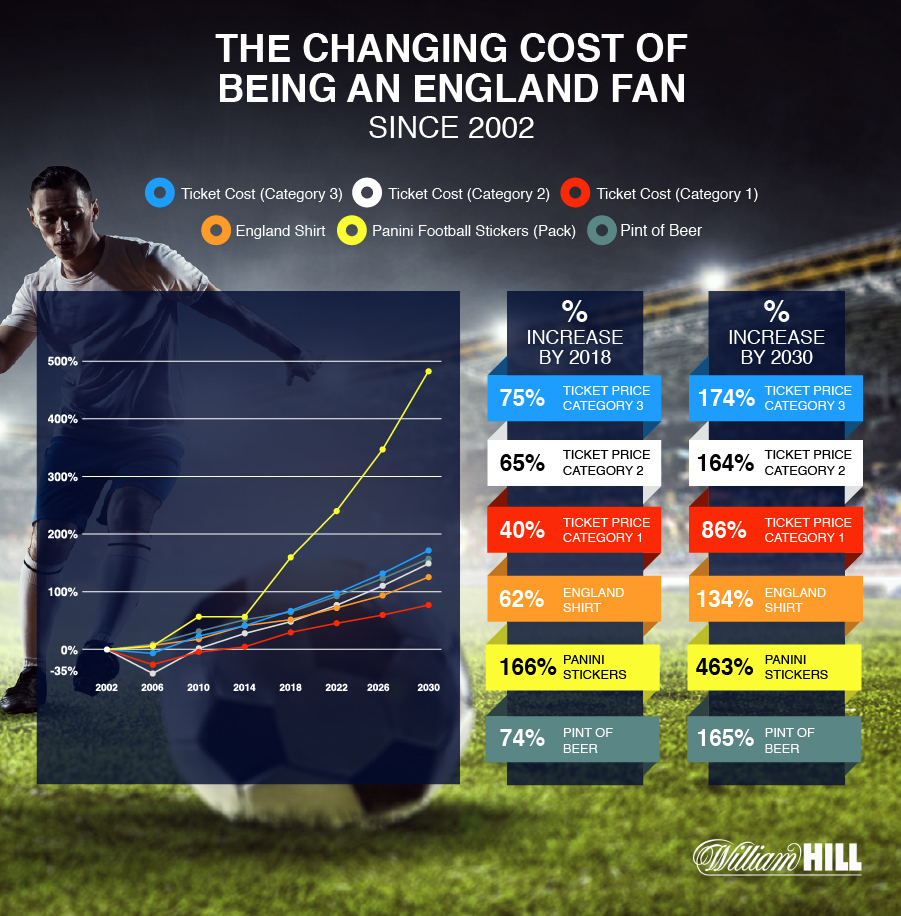 Compared to the 2002 World Cup; we’ve seen the steepest increase in the cost of a packet of Panini World Cup football stickers at 166%; the only cost we looked at which has more than doubled over the 16 year period.

England shirts, despite being a hot topic in the news in recent months, have increased in price by 62% and the price of a pint by 74%.

We wondered, however, what we might be paying in 12 years time at the 2030 World Cup.

(Price changes above based upon increases from 2002)

Below we’ve explored the changing (and predicted) prices behind each of the above in more depth.

How Have World Cup Group Stage Tickets Increased In Price Since 2002? 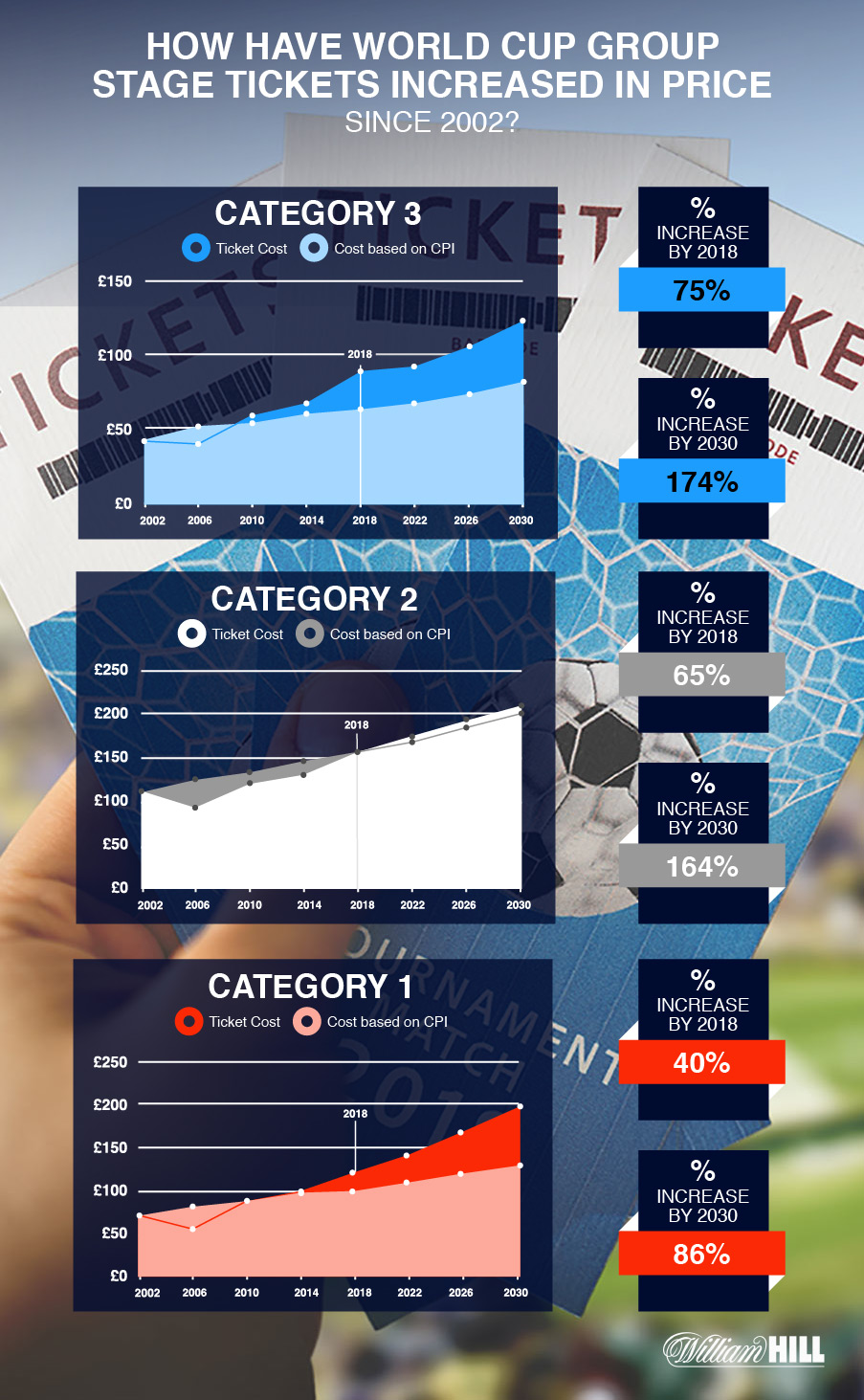 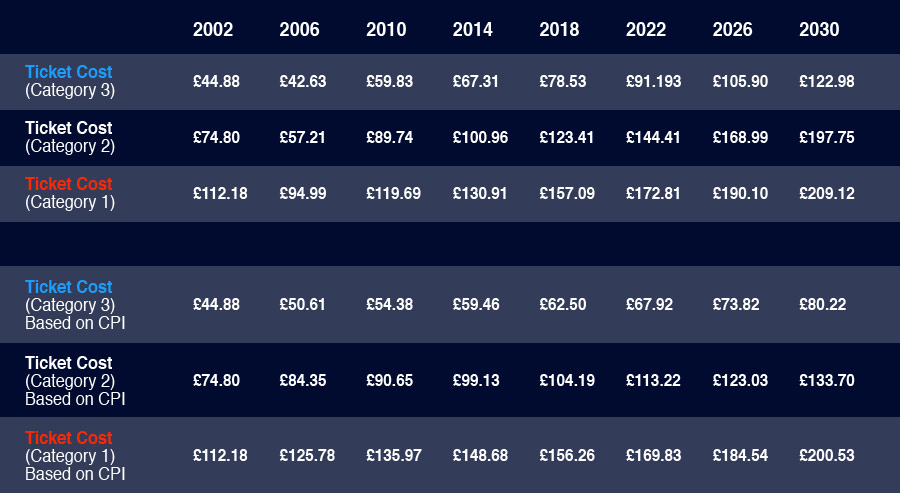 What about those fans who don’t have the opportunity to travel to watch England play in the World Cup?

They don their England shirt and head to the pub to watch the match…of course!

How Have England Shirts Increased In Price Since 2002?

Despite headlines earlier this year which revealed that an England shirt now costs fans £89.95, things weren’t quite as they were made out to be.

Yes, you can buy an England shirt this summer which costs £89.95, but it’s a ‘match’ shirt; one which is identical to those worn by the players. The standard ‘stadium’ shirt which is what we’d class as a typical replica shirt can be bought for £64.95.

This may still seem steep, but how has the price changed since the 2002 World Cup when against the inflation-adjusted price? 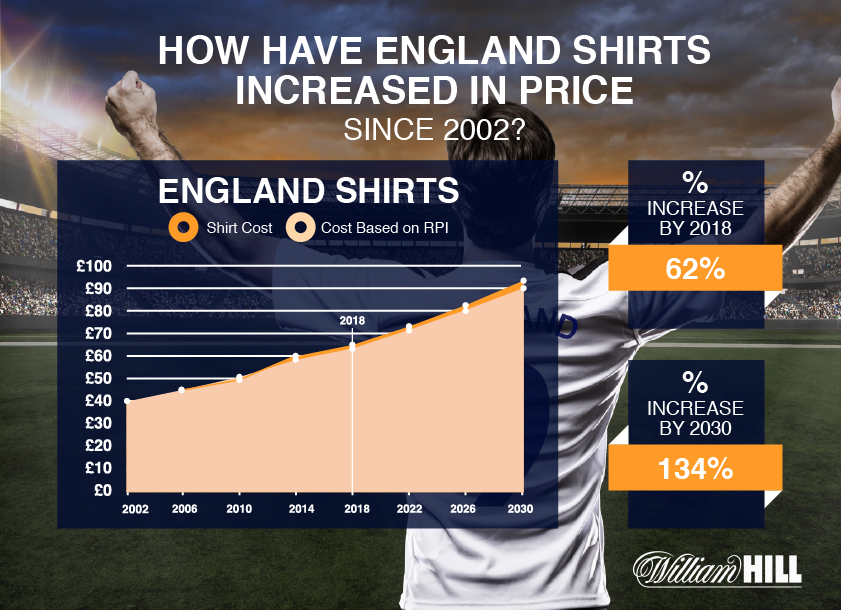 How Has The Price Of A Pint of Draught Lager Increased Since 2002?

Football fans will drink millions of pints of lager at their local whilst watching the matches, especially on 18th, 24th and 28th June; paying an average price of £3.63 according to recently released figures by the ONS. The drinking is set to continue with England making it to the 3rd place playoff against Belgium with the match to take place on 14th July!

When we look back at how much fans have paid to keep themselves hydrated whilst watching the game during every World Cup tournament since 2002, how do prices stack up? 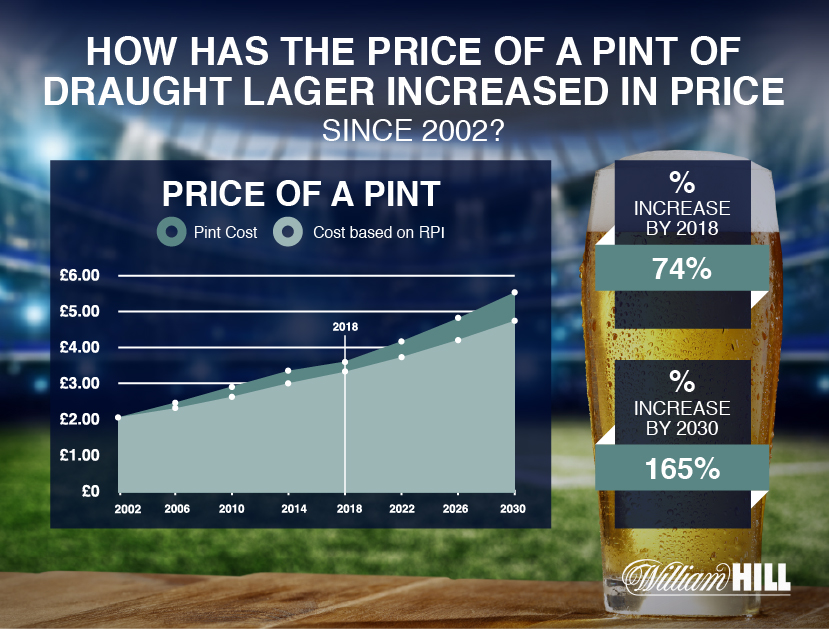 How Has The Price Of A Packet Of Panini Football Stickers Increased In Price Since 2002?

Just as with England shirts; Panini football stickers hit the headlines back in March when it was announced that a single packet of 5 would retail at 80p … an increase of 60% from 50p during the 2014 World Cup.

It was also revealed that it will cost fans approximately £773 to complete their album.

What did fans pay back in 2002, however, for the same stickers?

When did football stickers get so expensive and how much should they cost had prices risen with inflation? 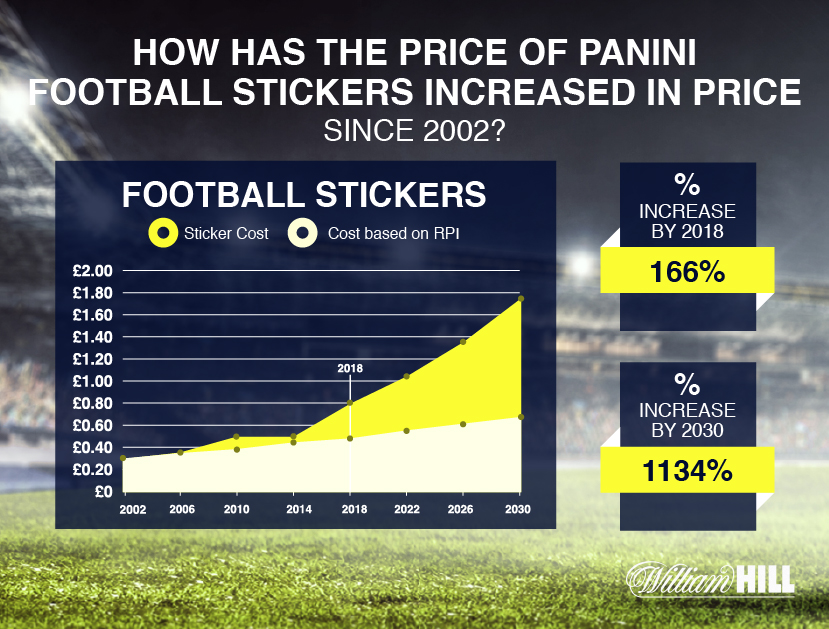 To calculate the change in the costs which England fans face every four years whilst watching the World Cup, we sourced the price of Group Stage tickets (Categories 1, 2 & 3), an England shirt, a pint of draught lager and a packet of 5 Panini football stickers.

Where possible, we sourced ticket prices using official FIFA data from press releases or the website at the time, looked back at using archive.org. When such data was not available, we identified the price through ticket stubs being sold on eBay; all of which clearly stated the category and match.

We sourced the cost of an England shirt using RRP data from retailers or manufacturers. We know certain retailers have sold shirts at discounted prices over the years, however to keep things fair we’ve assumed that fans are paying the list price.

The price of a pint was taken from ONS data and the price of a packet of football stickers (we’ll admit, this one was the hardest to find), was sourced from the archive.org capture of the official Panini website, news articles dated from the period and forum discussions.

The rate of inflation has been calculated using the RPI and future predictions have been made by taking an average of the change between every FIFA World Cup tournament since 2002.