The usual suspects are present towards the top of the Masters betting with Rory McIlroy, Dustin Johnson and Tiger Woods all positioned among the favourites for August victory.

However, that doesn’t mean value can’t be located further down the Masters odds, especially as William Hill is paying the first six places each-way.

Here are three players available at triple-figure prices that appear to have a much better chance than their market position suggests.

Check out the 2019 Masters outright betting

Kim is already a dual PGA Tour event winner and was a credible tied 24th at the Masters 12 months ago in what was only his second start in the major. His third-round, bogey-free 68 was especially noteworthy.

He arrives in solid form after finishing in a share of fourth at the Valero Texas Open, where he started especially brightly with a pair of 66s.

The South Korean also ranks second on the PGA Tour this term for ‘Putts Per Round’ and fourth for ‘Birdie or Better Conversion Percentage’.

He’s sure to nail his fair share of birdies and much will hinge on the accuracy of Kim’s ball striking as to how close he goes.

We have previously identified Justin Thomas as a serious contender to win the Masters, partly due to him ranking inside the top seven on the PGA Tour for ‘Par-4 Birdie or Better Conversion’.

This trend has been consistent across each of the last five Masters winners, with Cabrera Bello sitting fourth for this PGA Tour statistic at present this season. 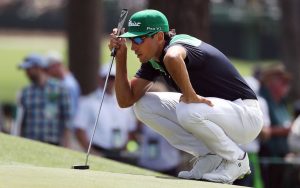 The Spaniard’s recent form has been slightly average, but he was third only a month ago at the Arnold Palmer Invitational, which extended the run he was on at the time to six consecutive top-25 finishes.

Cabrera Bello does have a couple of major top 10s to his name already too.

Check out our full selection of Masters betting opportunities

Fuzzy Zoeller was the last Masters debutant to wear the green jacket back in 1979, but the big-hitting Bjerregaard has the game to suggest that Augusta should play to his strengths.

The Dane is no stranger to big wins after holding off Tommy Fleetwood to win the Alfred Dunhill Links Championship in October, or eye-catching performances following his recent Match Play successes over first Justin Thomas and then Tiger Woods.

Bjerregaard is currently at a career high of 43 in the official world rankings and has barely missed a cut since last summer. Hungry for more Masters betting analysis? Check out our Masters Trends below.