Gustav Klimt has been installed as 5/1 favourite following the shake-up, but with the Aidan O’Brien-trained colt yet to score over the trip and everything else in the race paying at least your money back plus small change, if they place, he’s begging to be taken on.

William Hill are offering to pay five places instead of three in the Breeders’ Cup. Click here to bet on the race. 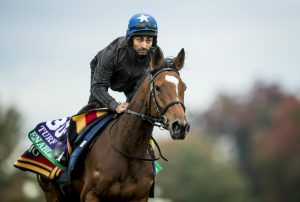 Enable prepares in the build-up to the 2018 Breeders Cup

Sure enough, each-way thieves won’t be leafing through the holiday brochures if the shortest-priced home runner places, but in our Breeders’ Cup odds, he at least offers a decent payday should he win, or your money back if he runs into the first five of this 14-horse affair.

Australian handler Brian A Lynch first moved to the United States to ride rodeo bulls in 1986, before switching to racing and working as the assistant to legendary trainer Bobby Frankel.

His representative in the Breeders’ Cup Mile betting scored at the 2016 meeting when landing the Juvenile Turf and is unbeaten in three runs at the trip. Two of those successes came at Group 1 level too, including last time out at Woodbine.

None of his opponents has anything like as high a percentage strike rate over 1m and, having also scored two G1 wins over 1m2f in 2017, he won’t be stopping if he can get a lead. A Group 3 winner on yielding ground as a two-year-old, more wet weather shouldn’t blunt his challenge either.

The booking of Jamie Spencer for steering duties aboard this Aidan O’Brien filly at Churchill Downs hints that connections may have finally hit upon the best way for the horse to be ridden after she narrowly failed to reel in Roaring Lion at Ascot on Champions Day off level weights.

Around half the field will be giving her 8lbs here, while all bar three foes at the time of writing must concede at least 3lbs to the filly.

If she’s ready to put her best foot forward after her monumental effort last time, she’s well fancied to reward each-way players following William Hill’s Breeders’ Cup odds and betting tips by running into the first five places and could even win yet another Breeders’ Cup race for O’Brien, the third-winning-most trainer in the event’s history. 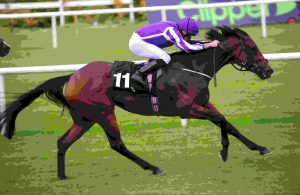 I can Fly is well fancied to reward each-way players with William Hill by running into the first five places offer.

Another O’Brien representative, the mount of Wayne Lordan may not have matched the brace of Group 1 wins she achieved in her juvenile year, but she has nonetheless enjoyed an admirable campaign this term, racing at the highest level throughout.

In six runs in elite company this year, her form figures read 334552, which should make compelling reading for anyone thinking of punting on the filly each-way with five places in the Breeders’ Cup odds and betting tips at William Hill.

The first of those fifth places came in open company behind Roaring Lion in the Coral Eclipse, while the second came on her most recent run when going down by a head to Laurens in the Sun Chariot at Newmarket.

Her recent silver medal was her best showing of 2018 to date and this consistent type is forecast to reward her each-way backers here.