The star-studded Gigginstown House Stud are looking to better last year’s tally in March’s Cheltenham Festival but, to give themselves the best chance of pulling another ace, they must get off to a strong start.

The field provided two winners on the opening day of 2017’s meeting – Apples Jade in the Mares Hurdle and Tiger Roll in the National Hunt Chase. The former sprung a bit of a surprise when upsetting the more fancied duo of Vroum Vroum Mag and Limini, two Willie Mullins’ representatives. The six-year-old bay went storming to the front 12 months ago under the ride of Bryan Cooper to delight backers, who had her picked at an SP 7/2. 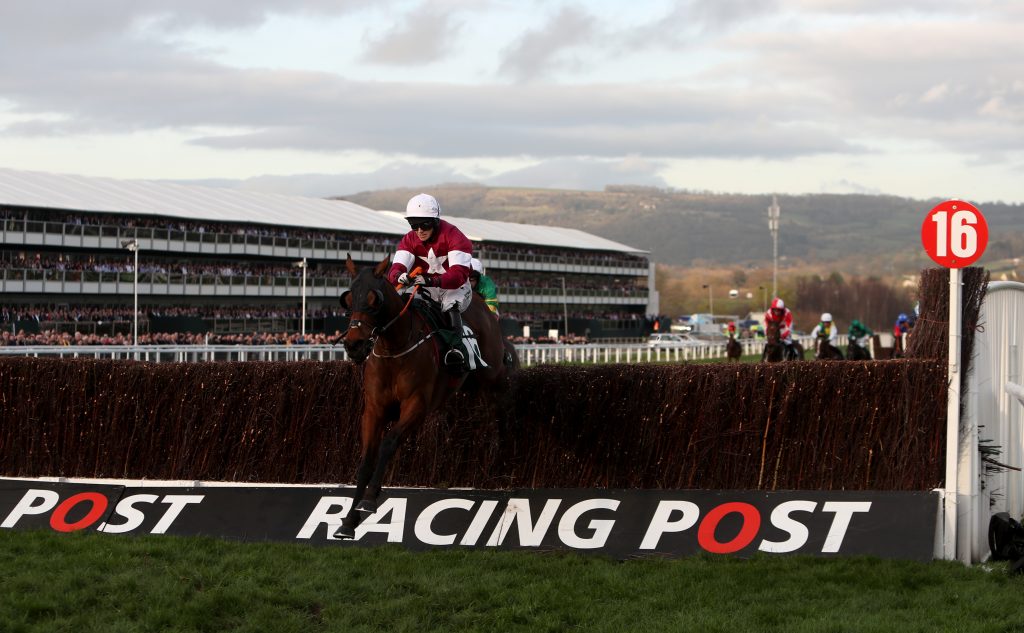 Tiger Roll (pictured) was a shock Cheltenham Festival winner in 2017.

Eight-year-old gelding Tiger Roll went down as more of an upset when winning off a bumper 16/1. Going to post as a no-hoper according to odds compilers, he smashed a talented field in a race of surprises; Missed Approach came home in second three lengths off the pace, with the silver medallist marked up at 50/1 and Haymount in third at a 33/1 poke. There wouldn’t have been too many punters on the 1-2-3 there.

She rates as the owners’ best chance of a win on day one.

Apples Jade has done nothing but improve since that race, and William Hill traders have her marked as a red-hot favourite in the antepost betting for the Mares Hurdle, with 8/13 quoted going into the meet. Benie Des Dieux heads the chasing pack for Willie Mullins, the second-fav a 6/1 play.

It’s little surprise to see Apples Jade head the field for two in a row, either. The Gordon Elliott-trained hope goes to Prestbury Park with a CV showing nine wins and four seconds from 13 career starts. Since claiming the Mares Hurdle, she has strung together a run of four wins, taking the Lismullen Hurdle at Navan, Hatton’s Grace Hurdle at Fairyhouse and Christmas Hurdle around Leopardstown in her three most recent goes. She rates as the owners’ best chance of a win on day one, according to traders, and one of their best of the week.

Connections will have to wait until Tuesday to see if Tiger Roll can book another visit to the winners’ enclosure. He’s expected to go in the Cross Country Chase on day two but has been quoted as the second-favourite behind Cause of Causes for JP McManus and Gordon Elliott.

Tiger Roll has been blowing hot-and-cold in the run-up to March with a fifth-place finish at the track late last year in a 3m 6f Cross Country Handicap Chase, a warm-up won by Bless The Wings for Elliott. Excuses can be made for the bare result – and he wasn’t the best in the build-up to last year’s spectacle, either – but there’s not a lot for followers of the form to get excited about. Taking the prize money was a real shock last time but, if Tiger Roll was to repeat the feat on Wednesday, it would certainly catch many off-guard.

Better is expected of Mengli Khan in the Supreme Novices 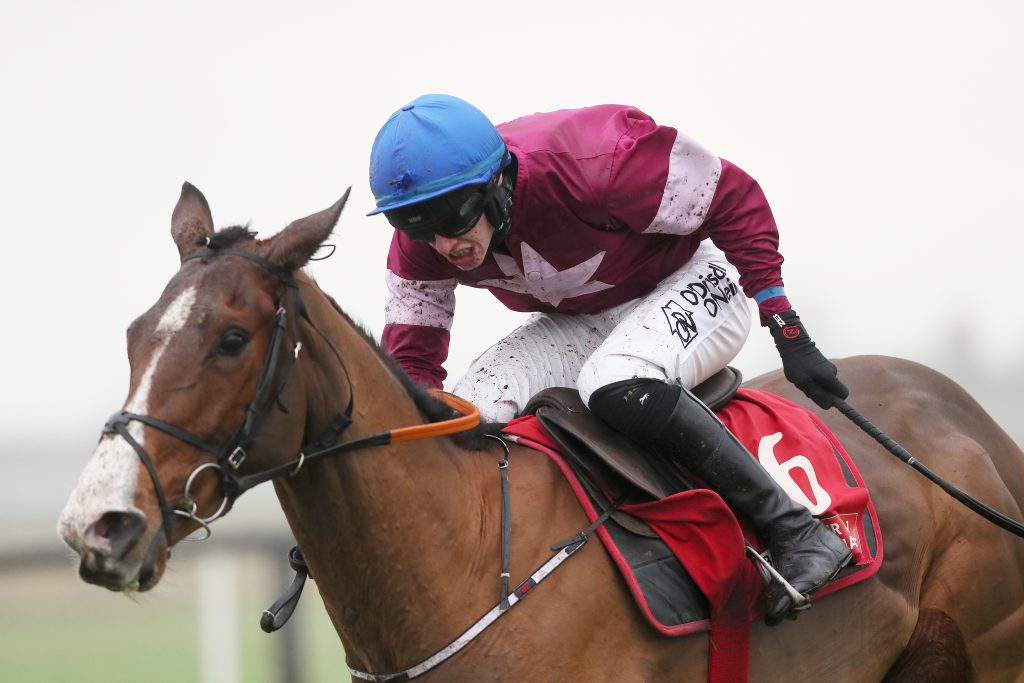 Mengli Khan could surprise in the Supreme Novices’ Hurdle on Tuesday.

A strong showing in the Supreme Novices would get the team off to the best possible start and Gigginstown are represented by Mengli Khan in one of the standout contests on Tuesday. Gordon Elliott has been trusted to get the five-year-old gelding right for the challenge and he kicked off 2018 when ending runner-up in the Moscow Flyer Novice Hurdle at Punchestown in January.

Despite going off as a fancied 7/4 shot, he got nowhere near Getabird, who strolled to a nine-length success. Khan did make a slight mistake at the business end of the two-mile contest – he may have finished a little closer – but the silver medallist never looked in danger of claiming gold. He showed the stomach for a fight when moving into second on the run-in but made no impression on an impressive victor. Improvement is expected from Mengli Khan and he’s 12/1 in the antepost pile behind favourite Getabird at 11/8.

Gordon Elliott is said to have been disappointed with their run at Punchestown as he was hoping to go a little closer to the winner that day and a touch further ahead of Carter Mckay, who finished 4 ½ lengths behind in third. Was it simply an off-day? We all have them and there’s no doubt plenty of punters will be looking to give Mengli a second chance at a very nice price. Cheltenham racing is the home of the upset, after all.

Petit Mouchoir primed for an upset in the Arkle 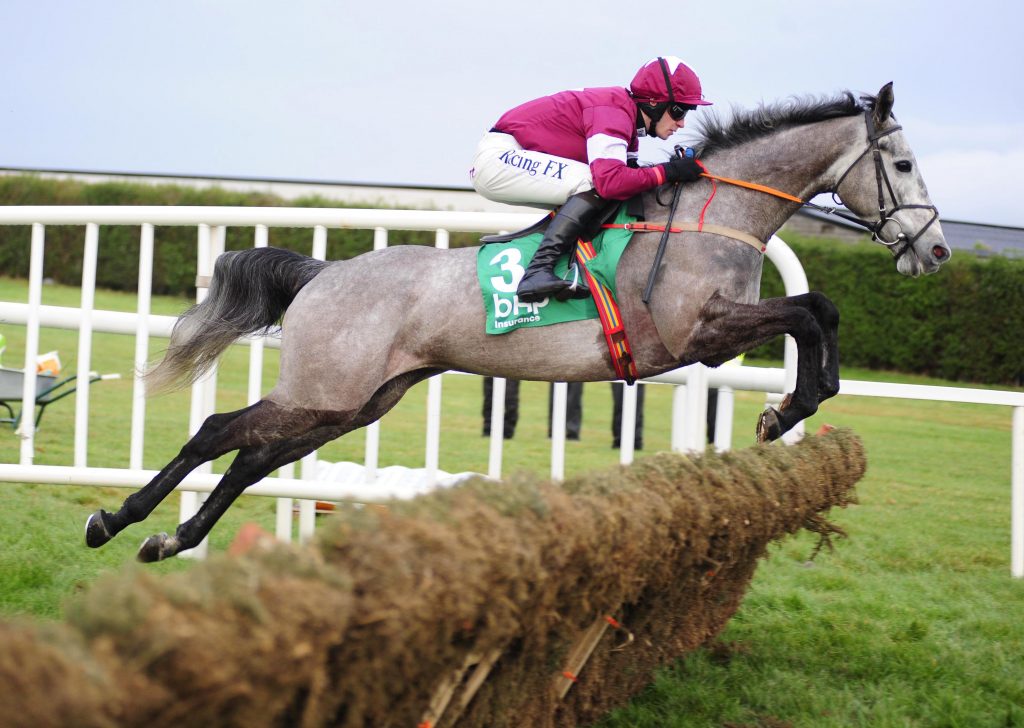 Petit Mouchoir is expected a big run in the Arkle Trophy.

Much nearer the head of the betting is Petit Mouchoir in the Arkle Trophy – a race won by Altior for Nicky Henderson last year that was the trainer’s third success in this race in the last six renewals. Henry de Bromhead will be looking to stop the rot and do what he did with Sizing Europe in 2010 and claim the winner’s cheque.

Petit Mouchoir is tipped to grant him that wish and the betting has the team as a 2/1 second favourite in the early exchanges of 2018. The popular seven-year-old grey brings stats of five wins and six places from 14 starts and has finished no higher than third since falling at Newcastle late in 2016. That purple patch includes victory in the Ryanair Hurdle at Leopardstown, Irish Champion Hurdle at the same track and a runner-up behind Footpad in the Arkle Novice Chase in Ireland.

The contender has run twice before at the Cheltenham Festival and will be hoping it’s third time lucky. An eighth-place finish in the Supreme Novices two years ago was followed by a place in the Champion Hurdle last year, ending behind Buveur D’Air and My Tent Or Yours. Well-respected by traders before the off, it’s only natural he’ll be seen as a major player in this race.

More to come from Samcro

If day one doesn’t go to plan, it won’t be the end of the road for Gigginstown at this year’s Festival, as they have a number of major players in the week’s biggest races. Samcro is quoted favourite in the antepost betting with 4/6 available in the Ballymore Novices Hurdle and traders can’t see past a strong win, with nearest rival Next Destination back at 9/2.

The six-year-old chestnut isn’t short of supporters in the industry but there are plenty of question marks hanging over the jolly, with many thinking he’s overhyped and about to be exposed. The Gordon Elliott-trained star arrives with a 100% winning record from half a dozen starts. Winning at Punchestown on debut over 2m late in 2016, the team have gone from strength-to-strength.

Samcro – a product of Germany and Saddlers Hall – has never been tested at Prestbury Park but he has delivered on the big stage already, winning the grade one Deloitte Novice Hurdle last month, beating runner-up Duc Des Genievres by over five lengths in a stunning performance. That was a career-best and we’ll need to see him go and improve again – but there’s no doubt he has it in him to justify his place in the market.

On the road to riches

If the team don’t get another winner in the week, they’ll want to land the Cheltenham Gold Cup – the pinnacle of the festival and the champion everyone goes home talking about. Run on Friday, this grade one race is decided over 3m 2f, with a talent-laden field looking to wrestle the crown worn by Sizing John last year. Two in a row was ruled out, meaning we will have a new ruler and the market looks wide open.

Road to Respect goes under the banner of Gigginstown/Meade and carries the kind of recent form that’s sure to make him popular with lovers of a price, with 8/1 there for the taking. Four wins and a runner-up in five, the spare came in the Champion Chase at Down Royal when he was edged by Outlander by half a length. He won the Stable Plate last year with plenty to spare and claimed the Leopardstown Christmas Chase last time, leaving rival Outlander back in third.

While he hasn’t run this year, that will take nothing away from Road to Respect’s chances. Connections have no doubt their horse has the pedigree to win the battle, but have admitted they have worries over the ground, telling members of the press their chances will be greatly reduced if the ground comes up soft. There is plenty of value in the antepost list but it may just be worth waiting until Friday morning to see how conditions under-hoof lie.