Cheltenham Trials Day: Which trials to rate and which to hate

Held at the end of January each year, Cheltenham Trials Day is supposed to offer pointers for that year’s Festival to trainers and bettors alike, but which auditions are the ones to take note of when it comes to the ante-post betting?

We’re putting the trials on trial. 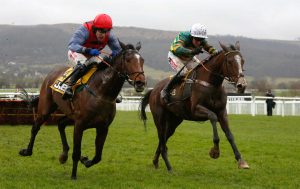 Apple’s Shakira and Barry Geraghty (right) get the better of Look My Way and to win The Triumph Trial Juvenile Hurdle Race.

Check out our horse racing tips here for the latest odds on this weekend’s action.

Cheltenham 12:40 – Trial for the Triumph Hurdle

Three of the last four winners of this race were sent off favourite for the Triumph, with two, Defi Du Seuil and Peace And Co, doing the business. The third, Apple’s Shakira, was unable to follow suit last year, finishing fourth.

In a further advert for the strength of the race as a pointer, the 2014 second Kentucky Hyden also went on to take a silver in the juvenile hurdlers’ championship race. The trial scorer that year, Le Rocher, was injured and missed the Festival.

Verdict: Highly likely the winner will be in the Triumph Hurdle betting mix.

As with the other handicap chase on this card, it’s usually contested by those with Festival aspirations and the 2018 winner Mister Whitaker went on to claim this trial and the obvious March target.

It can prove informative for other Festival handicaps too, with Un Temps Pout Tout fourth in 2016 en route to winning the Ultima the same year.

Verdict: Keep an eye out for winners and placed horses in the Cheltenham Festival handicaps

Victory in this ‘trial’ can result in the handicapper forcing horses into graded company when they may not quite be up to it at the time.

Two of the last three winners, Frodon and Annacotty, went on to be hammered in the Ryanair Chase, while 2014 king Wishfull Thinking was a distant fifth behind Sire De Grugy in that year’s Champion Chase.

Last year’s edition saw the second, third and fourth home (Shantou Flyer, King’s Odyssey and Coo Star Sivola) all at least place in March, including a 1-2 in the Ultima.

However, preceding years had been relatively sparse in terms of Festival stars coming out of the places in this race too.

Verdict: Not overly informative of late – could that be changing? 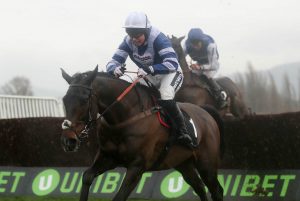 Victory in this Grade 2 contest tends to have the beast in question pegged for a minor medal in the big one at best, with 2015 winner The Giant Bolster third in what can only be described as an ordinary edition of the Festival showpiece behind Lord Windermere.

Since then all three winners to return for the Gold Cup in March finished sixth, while the last horse to do the Cotswold Chase/Gold Cup double was Looks Like Trouble in 2000.

This is more like it. Plenty of contestants going on to run big races at the Festival after this one, with at least one of the first three home going on to place in either the Ballymore or the longer Albert Bartlett Novices’ Hurdle in four of the last five runnings.

Last year’s gold medalist Santini was third in the latter race, while second Black Op was second in the Ballymore.

Verdict: At least as informative for the Albert Bartlett betting as the Ballymore odds

Cheltenham 15:35 – Trial for the Stayers’ Hurdle

The most rock-solid heat on the Trials Day card in terms of Festival pointers.

Last year’s second and fourth, Wholestone and Colin’s Sister, finished third and fourth in the 2018 Stayers’ Hurdle, while 2015’s running saw winner Saphir Du Rheu second in the championship race and fourth Cole Harden reverse the form to win it.

The first horse home in this stamina test to contest the March event has finished third or better in each of the last five editions.

Verdict: For Stayers’ Hurdle betting pointers you can set your watch by the Cleeve Hurdle. 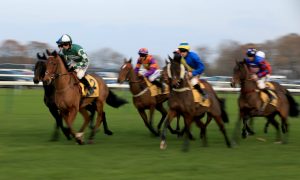 Runners and riders get underway at the start of the race during the Betfair Exchange Stayers’ Handicap Hurdle.

Recent renewals of the lucky last on Festival Trials Day haven’t exactly been groaning under the weight of contestants going on to run big races at that year’s Festival.

However, the County Hurdle exploits of two winners across the last five runnings suggest it could be worth giving the form a serious ponder in the aftermath.

Last year Remiluc just failed to do the double when finding only one to good in the County, while 2014 king La Fontana, returned in March to win the aforementioned handicap hurdle.

Verdict: Worth a second look with the County Hurdle betting in mind