Warwick’s Classic Chase has highlighted horses that have gone on to put up bold showings in the Grand National in each of the past two seasons and Step Back could be the next chaser to use the 3m5f marathon as an Aintree launchpad.

In 2017, One For Arthur won both races, while last year Milansbar followed up his win at the Midlands track with a highly-creditable fifth behind Tiger Roll on Merseyside.

Mark Bradstock’s unexposed nine-year-old is already among just ten horses trading at 25/1 or shorter for the 2019 edition of the world’s richest steeplechase in April and he’s expected to prove himself worthy of such an assessment in the Classic Chase at odds of 15/2.

Bet on the latest Classic Chase odds with William Hill 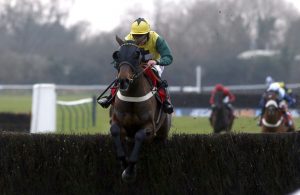 Milansbar pulls away from the last fence on the way to winning The Classic Handicap Steeple Chase Race run during Betfred Classic Chase Day.

Why not check out our horse racing accumulator tips?

Unexposed Step Back is our Classic Chase betting tip

A late starter under rules, Step Back was pitched into the Albert Bartlett at the 2017 Cheltenham Festival on only his second start over hurdles, after an eight-race point-to-point career.

Last season was his first over fences and saw him mark himself as a chaser on the up with consecutive victories by margins of 16 lengths and 13 lengths, the latter of which saw Step Back relish the step up to a 3m5f trip to carry off the Bet365 Gold Cup at Sandown.

He scooted home off bottom weight on his first try beyond 3m in that race, spanking a field of seasoned handicappers, including a then 161-rated Blaklion, Rock The Kasbah, Present Man and Houblon Des Obeaux, the last three of which have won handicaps since.

Unsurprisingly he was put up a hefty 14lbs for that effort, but he still gets to run off a manageable 11st 3lbs in the Classic Chase, where he’ll be one of just a trio of horses to have contested less than nine races over fences, along with Duel At Dawn and Impulsive Star.

Step Back’s seasonal return, when seventh over 2m7f at Chepstow in October, may not have been overwhelmingly encouraging, but he was nonetheless in contention until fading two fences from home and his trainer tweeted after that more work would be done on his jumping.

One of just three horses in the field to have previously scored at the Classic Chase’s 3m5f trip at a track that, like Warwick, is considered a stern jumping test and as unexposed as any horse in the field over fences, Step Back looks a reliable selection for both each-way and win betting purposes.

It may even be worth availing yourself of some of the 25/1 currently available about him winning the 2019 Grand National before he scores at Warwick.