Could you afford to purchase a Gold Cup winner?

Have you ever dreamed of owning a racehorse? In the run up to Cheltenham’s Gold Cup we take a closer look at the numbers to see whether or not it could be a good investment.

The pinnacle of the National Hunt calendar

When it comes to jump racing, nothing can compete with the spectacle of the Cheltenham Festival. The high-point of the four-day event is the Gold Cup, the most valuable non-handicap chase in Britain, with £625,000 up for grabs for the winner.

In the stands of Cheltenham Racecourse, you’ll find a number of owners and trainers nervously watching as their respective horses’ race over a distance of 3.3 miles, while tackling 22 obstacles.

The stakes are high for all concerned. Getting to this point on race day is more than a labour of love – it’s also a pricey endeavour.

But what are the realities of joining this unique community of approximately 8,000 racehorse owners in UK?

Here at William Hill we have crunched some numbers – looking at the odds, purchase cost and winnings of the most popular horses in this year’s Gold Cup to see if their respective owners are likely to have a winner in 2019. 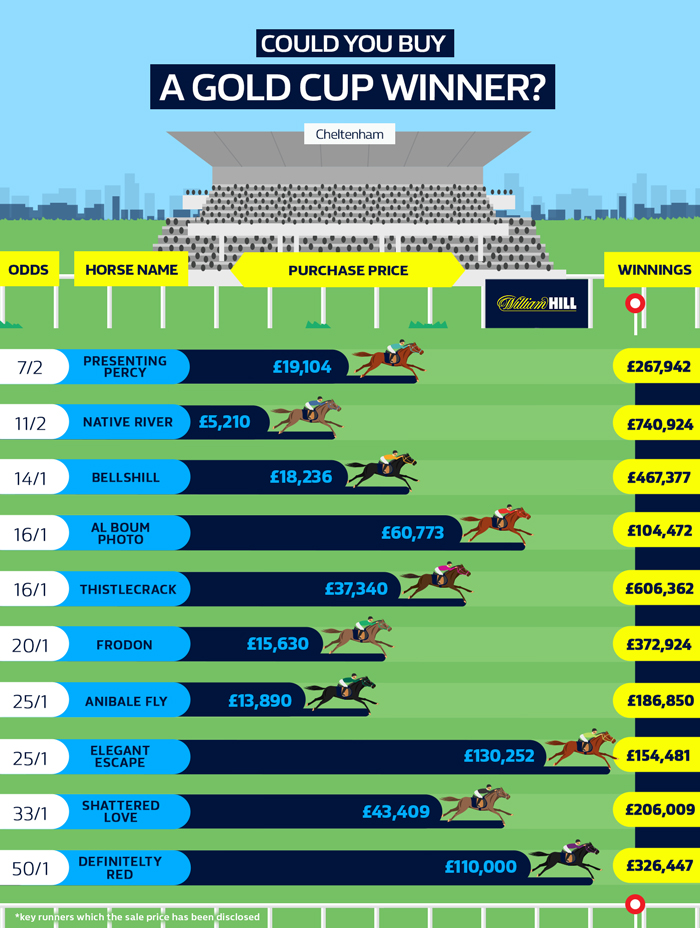 Is owning a Gold Cup racehorse worth the investment?

Realistically, when it comes to earning a decent return on a racehorse you own, it can be difficult. What is guaranteed, however, is a lot of fun and a potentially a modest return.

Fast forward to today and we have another possible Best Mate story in the making with the Irish-bred, British-trained steeplechaser Native River. Native River is one of the favourite for this year’s Gold Cup, having won the race in 2018. Purchased back in 2010 for close to £5,220 (€6,000), he won over half a million pounds on that race alone.

Similar to Elegant Escape, Definitely Red is one of the more expensive horses in this year’s Gold Cup. The 10-year-old Gelding has been sold four times in his lifetime – most recently for £110,000 – .

The reality of racehorse ownership

Beyond the cost of purchasing a racehorse, there are ongoing expenses to contend with. The Racehorse Association (ROA) has reported that the average annual cost of a jumps horse is £16,325 and £22,595 for a flat horse.

Although it sounds like a large amount, when you break it down it begins to make sense. As a racehorse owner you’ll be responsible for paying for, among other things, training fees, farrier services, for supplements, clipping and visits to the vet. You get the picture – racehorses cost money.

However, through shared ownership, you can spread the financial burden. In fact, many already do as according to the ROA, more than 60% of racehorses that are currently trained in Britain are in a joint ownership, syndicate or partnership.

The wonderful thing about racehorse ownership is that it’s open for everyone to take part in – you really don’t have to come from a privileged background of have a huge pot of cash to play around with.

So, if you love the sport, are up for a challenge and keen to be part of a brilliant community, then by all means, you can give it a go. Who knows, you may just find yourself owner of a Gold Cup winner.

See the odds of all of this year’s Cheltenham Festival runners.

– Horses used in the infographic are runners in which the sale price has been disclosed.

– Purchase prices of horse all sourced from racingpost.com.

– Winnings of all horses sourced from racingpost.com.

– Any horses that were sold in euros have been exchanged to pounds based on the exchange rate in February 2019.