Justify: seven reasons he'll silence the sceptics to win the Belmont Stakes and the US Triple Crown

Sometime around 23:46 on Saturday, Bob Baffert’s Justify will attempt to make history by winning the Belmont Stakes at odds of EVS and secure the US Triple Crown in the process.

If victorious, the son of Scat Daddy will become just the second completely unbeaten colt ever to add victory in the third leg to wins in the Kentucky Derby and the Preakness Stakes, after Seattle Slew in 1977.

Naturally, given some 23 horses have completed the first two legs of the US Triple Crown, Justify’s shot at immortality seems to be subject to a healthy dose of scepticism in the American media.

Read on for seven reasons to stop worrying and back Justify to win the Belmont Stakes and with it the Triple Crown.

Being drawn right against the rail has been viewed as a sizeable negative for Justify, but four of the last six to break from stall one in ‘the Test of a Champion’ have finished fourth or better.

Dale Romans, who trains the two-drawn Free Drop Billy (40/1), gave the effect of the draw in a race over this distance short shift when he told the New York Post: “They’re going a mile and a half.

“If you’re worried about the post, you don’t belong.”

They’re going a mile and a half. If you’re worried about the post [stall], you don’t belong.

His trainer has masterminded a successful Triple Crown assault before

Just three years ago, Baffert trained American Pharaoh to become the first Triple Crown winner since Affirmed managed it under a teenaged Steve Cauthen in 1978.

Suggestions that, having already raced five times this term, Justify could be in need of a prolonged rest are mitigated by that fact that six of his nine rivals have contest four races or more since the start of the campaign. American Pharaoh had four races before landing the Belmont in 2015.

Fast going at Belmont should ease concerns over getting the trip 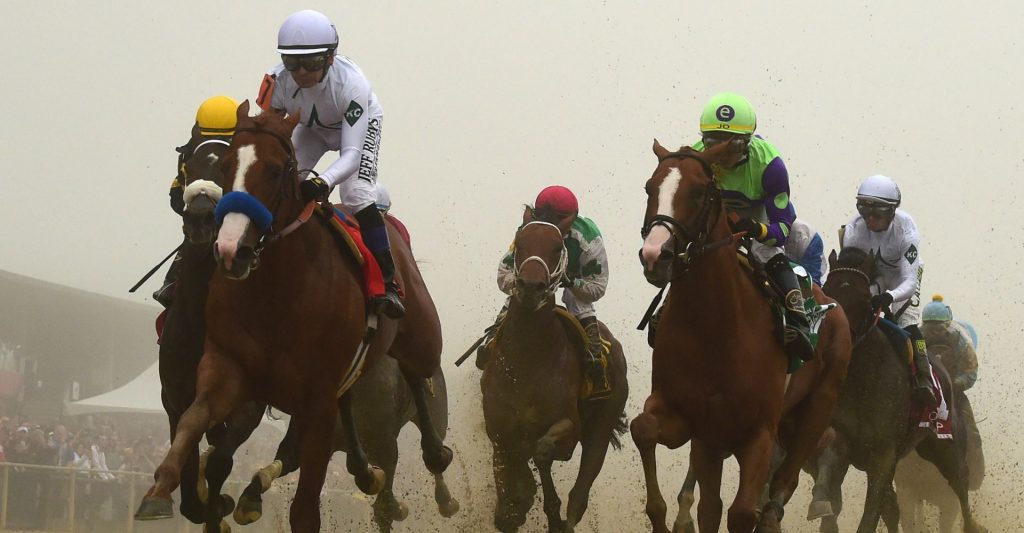 Each and every one of the three races Justify won prior to the Kentucky Derby was contested on dirt going described as fast, while both his triumph at Churchill Downs and subsequent Preakness win came on ‘sloppy’.

Given the brilliant speed shown in his last two races, the return to fast going should see that zip used to even greater effect, while ameliorating some of the stamina-sapping effects of the step up in trip to 1m4f.

If you’re ever going to back Justify it might as well be now. Just once in his unbeaten, five-race career has Justify been sent off at a bigger price than the EVS currently available.

Justify was being eased down in the Preakness

Looking back on the Pimlico race, in which Justify’s backers were given palpitations by the fast-finishing Bravazo, the former’s jockey ‘Big Money Mike’ Smith told Fox Sports he had been easing his ride down as the line approached, with the Belmont Stakes in mind.

In 2014, California Chrome was stepped on by another horse leaving his stall and finished fourth, despite running the rest of the race with injuries to his heel and a tendon.

Two years earlier I’ll Have Another was scratched from the contest with an ailment the day before, while Big Brown had suffered from a hoof problem in the lead up to the 2008 edition and was eased down to last in the home straight.