The most successful regions and counties for Cheltenham Festival trainers

Ever wondered which county or region is the most successful when it comes to producing winners at the Cheltenham Festival?

Well, ahead of this year’s four-day racing extravaganza at Prestbury Park, which gets under way on Tuesday, William Hill has produced a very handy interactive Back Your Local Trainer tool. The unique microsite offers insights into all trainers with runners entered over the four-day jump racing bonanza, including the yard’s recent form, record at the track and success at previous Cheltenham Festivals.

The unique microsite contains 155 separate trainers from 49 different counties across the British Isles who, combined, have amassed 413 Festival winners. Using the tool, we’ve found out below which are the most successful regions and counties for horse racing trainers.

With an impressive 73 winners at the meeting, Berkshire is the county which has produced the most Cheltenham Festival winners in history.

The team from Berkshire this year will once again be headed by a strong group from Nicky Henderson, with Shishkin in the Supreme, Epatante in the Champion Hurdle and Santini in the Gold Cup his most host high-profile contenders.

However, in the likes of Jamie Snowden, Warren Greatrex, Oliver Sherwood and Hughie Morrison, he has a number of capable trainers who have already tasted victory at the Festival. 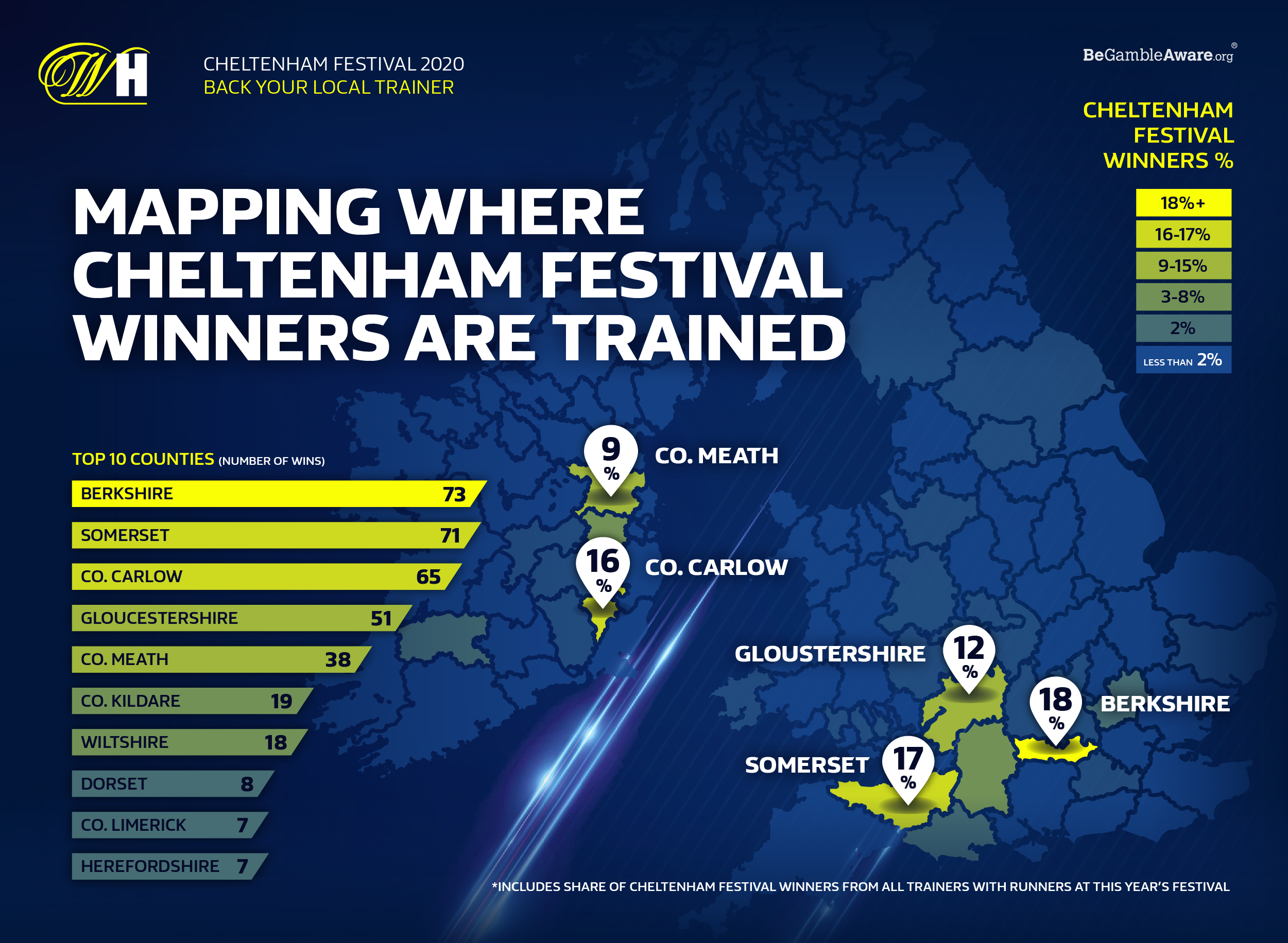 Given that both Paul Nicholls (44 Festival winners) and Philip Hobbs (20 Festival winners) reside in Somerset, it doesn’t come as too much of a surprise to see that Somerset has generated 17% of winners at Prestbury Park. The Nicholls and Hobbs yards are two of the most powerful in England and alongside David Pipe (seven Festival winners), it is another county which is sure to head to this year’s meeting with a strong squad of horses.

Hobbs’ leading hope comes in the Queen Mother Champion Chase, where he saddles the fast-improving Defi Du Seuil. The seven-year-old is unbeaten in three starts this term and at just 2/1 is a very strong contender to give his handler another winner.

County Meath could have a good meeting

County Meath has been responsible for 38 winners at Cheltenham so far, largely in part to Gordon Elliott’s 25 winners. Alongside Willie Mullins, the Irish handler is the most powerful in Ireland and will once again send across a very strong team as he seeks to win the Champion Trainer title at the Festival for the third time.

This year, the region in the East of Ireland has a strong group of trainers taking horses over to the UK. Gavin Cromwell, in the midst of his strongest season to date, as well as Tony Martin and Noel Meade, all have contenders making the journey over and it would be a surprise if they didn’t come back with at least a handful of winners.

Fans can now visit William Hill’s Back Your Local Trainer to find their nearest stable .