William Hill are giving you the opportunity to win £1m in our Golden Race each day of the Cheltenham Festival by picking the first six horses home in the correct order.

All you need to do to earn your chance to tilt for a cool million each day of the meeting is stake £10 on a qualifying racing bet with William Hill and then make your Golden Race entry.

The £1m Golden Race on the fourth and final day of the 2019 Cheltenham Festival is the Martin Pipe Handicap Hurdle for Conditional Jockeys, also known as ‘the boys’ race’.

Normally all these riders are normally allowed to claim a reduction in the weight their mounts must carry, to encourage trainers to use them despite their inexperience (the claim shrinks the more winners they ride).

Here, however, they all compete with no such allowance, in a race that Willie Mullins, Paul Nicholls and Gordon Elliot have carved up between them over the past six runnings.

Each has won it twice in that sequence, with Elliott scooping the past two. This year he runs three horses: likely favourite Dallas Des Pictons, Defi Bleu and Cartwright.

The former seems certain to go off favourite, but the latter has been given out as charity bet on the Cheltenham Festival preview night circuit by both the trainer himself and William Hill brand ambassador AP McCoy.

There’s a £1m Golden Race each and every day of the Cheltenham Festival 2019, from Champion Hurdle Day, through Champion Chase Day and Stayers’ Hurdle Day to Gold Cup Day.

How you avail yourself of the £1m prize pot on offer remains the same across the four days of elite level horse racing action.

The £10 you wagered to qualify yourself for the £1m Golden Race on the day may have already enriched you before the day’s Golden Race has even begun, but as long as you’ve staked at least five minutes before the off, it you’ll get your entry.

From there, the power is in your hands. You’ve got to pick the first six home in order in our selected Golden Race to earn your share of the £1m prize. 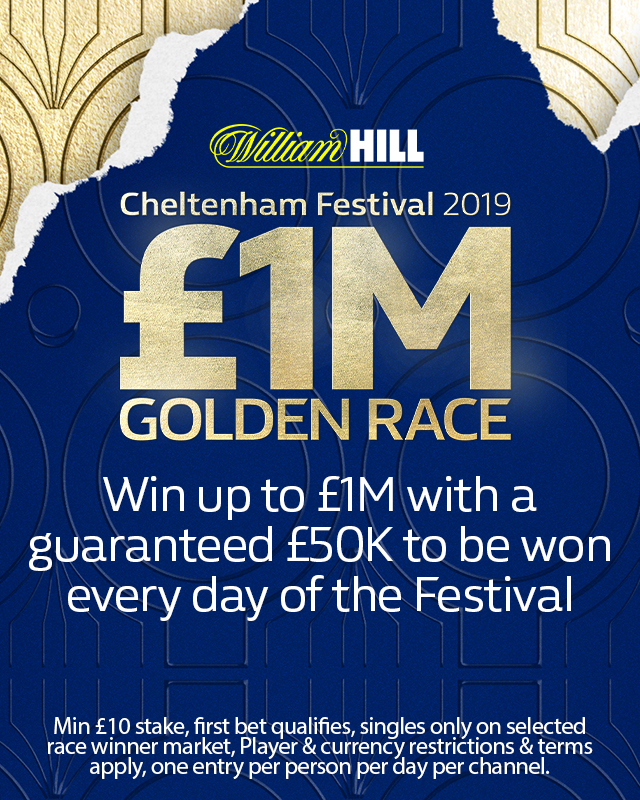 If you’re the only one to do so successfully you won’t need to share it – the full mil will be making a bee-line for your bank balance.

How you go about selecting the first six home in each day’s £1m Golden Race at the Cheltenham Festival 2019 is up to you.

Some will favour a totally random approach, while others will opt for appealing names, or the shortest-priced runners in the betting.

Or perhaps you’re more of a Cheltenham Festival 2019 form student?

This jumps season has been something of a curveball campaign, with equine flu and an unusually dry winter contributing to an atypical build up to the March motherlode.

Nonetheless, notes taken along the way could prove vital if the £1m Golden Race is to be landed.

Others will still prefer to defer to the guidance of Cheltenham Festival 2019 trends, which can help you narrow down the Golden Race field if you’re struggling to select your sextet.

However you pick the first six home in the £1m Golden Race each day of the 2019 Cheltenham Festival, watching it unfold against the Cotswolds panorama that backdrops the greatest show on turf is set to be Festival thrill-ride.