“I ain’t no welterweight. I’m a light heavyweight in the welterweight division. It should be illegal, what I’m doing.”

This was a comment from Darren Till on the MMA Hour show, following his October 2017 victory over Donald Cerrone.

However, close to 18 months on, the Liverpool lad continues to fight in the welterweight division and will headline the UFC Fight Night 147 card at London’s O2 Arena against Jorge Masvidal

Till is the clear 2/5 favourite in the UFC betting, with the much smaller Masvidal priced up as the 19/10 underdog.

Here are three significant factors that may play a role in deciding who gets their arm raised in victory in London:

The welterweight division in the UFC carries a maximum upper weight limit of 170lbs, yet by the time Till steps into the Octagon, he could weigh as much as 200lb.

A step up to middleweight, or even light heavyweight, has long been spoken about for the 26-year-old, although his focus now may be geared towards a more planned rematch with then-UFC welterweight champion Tyron Woodley. 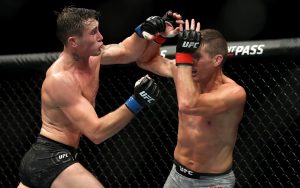 Darren Till in action when beating Stephen Thompson by unanimous decision

While Till is arguably naturally the heaviest of all of the fighters within the UFC welterweight ranks, Masvidal is among the lightest and it was only three years ago he returned to the division from lightweight.

The Florida native is more at home weighing around the 170lb mark, but could be giving up close to 30lbs to his opponent in London.

Will Till be able to make maximum use of this at UFC Fight Night 147?

With Till having to rehydrate somewhere in the region of 30lbs in 24 hours, this is bound to have a knock on effect on his performance.

Tiredness, muscle cramps and a general increased risk of injury are all possible consequences associated with dehydration.

With this fight taking place over five five-minute rounds, there is a real possibility of Till struggling whether physically or cognitively as the bout goes on.

Given this and the fact the Masvidal has the superior stamina in any case, it would make sense for the older fighter to adopt the strategy of pushing the pace of the contest.

Masvidal can sometimes lack urgency in his fights, often being happy to sit on the back foot and trade.

But, this is the fight that he should be looking to utilise his superior grappling and boxing skill to drain the cardio of his opponent.

See all of our UFC betting markets

The bigger urge to bounce back

Masvidal does have previous for beating a much bigger opponent, when triumphing on his welterweight debut against Cezar Ferreira.

However, he is on a two-bout winless sequence, after losing to Demian Maia and then by unanimous decision to Stephen Thompson.

Till’s defeat to Woodley also means he needs to get back on the winning bandwagon and the feeling is that his opponent has almost been hand-picked to allow him to dominate.

The home fighter has revealed that he wouldn’t be satisfied if the bout went longer than the opening five minutes, despite Masvidal’s only defeats in the last decade being by decision, and it would seemingly be in his interest to get the job done early.

Logic would suggest that the longer the fight goes, the more it favours Masvidal.