UFC is back again on Saturday night as the undisputed Queen of the Octagaon, Amanda Nunes, returns to defend her featherweight crown against Felicia Spencer at UFC 250.

Former bantamweight champion Cody Garbrandt will also make his long-awaited return in the co-main event as he squares off with Raphael Assuncao, with the next challenger at 135lbs also likely to be decided as Aljamain Sterling meets Cory Sandhagen.

We preview all the action ahead of another exciting card.

She heads into this featherweight clash against the supremely talented Felicia Spencer on Saturday looking to add yet another record to her impressive CV by becoming the first fighter to successfully defend belts in two different weight classes while holding the titles simultaneously. Nunes is the heavy favourite at 1/7 to secure the win and make history.

‘The Lioness’ last fought in December, taking a unanimous decision against Germaine de Randamie to defend her bantamweight title. Still just 32, there’s little left for Nunes to prove in either weight class having knocked off a who’s who of the finest female martial artists in the world, including Cyborg, Holly Holm, Raquel Pennington and Valentina Shevchenko.

As ever, she will face stiff competition if she is to emerge victorious against Spencer. Spencer, 9/2 for the win on Saturday, herself took Cyborg all the way before coming out on the wrong side of the decision in just her second UFC appearance. Since then she’s confirmed her place as a contender at 145lbs with a win over Zarah Fairn earlier in the year. 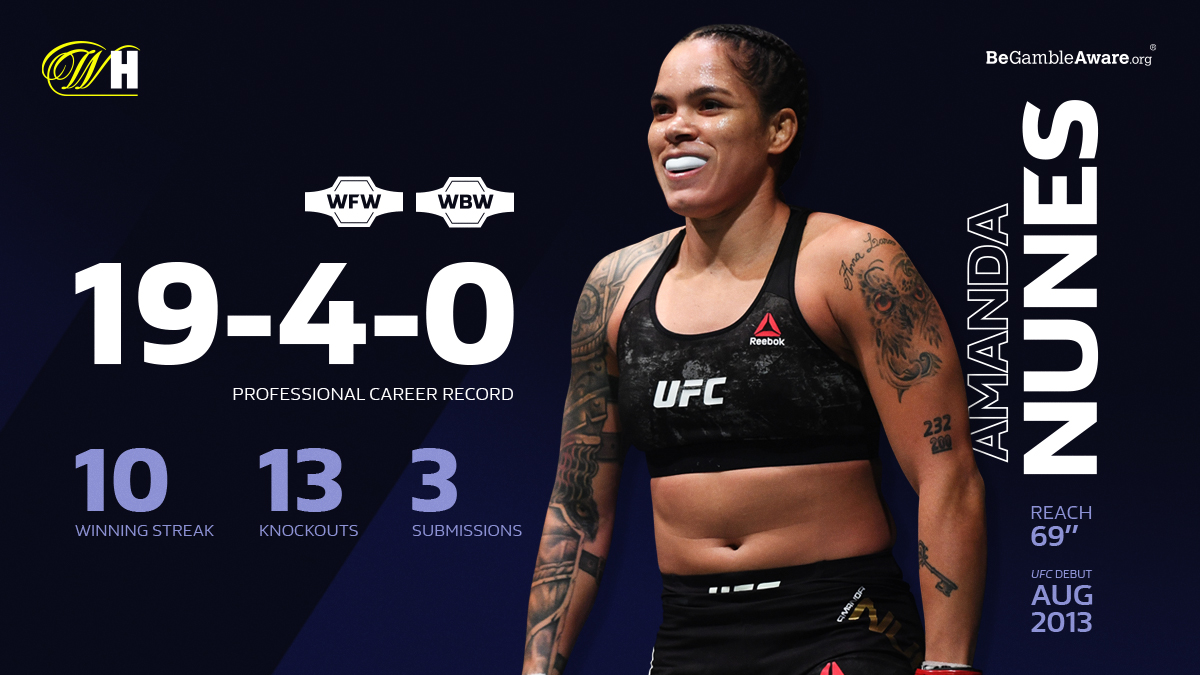 Few have had faster rises from unknown to champion than former 135lb champ Cody Garbrandt. Just two years after his UFC debut, ‘One Love’ put in a dominant performance against Dominick Cruz to take the bantamweight belt at UFC 207 and was at the time seen as one the sport’s brightest stars.

However, after losing back-to-back grudge fights with T.J. Dillashaw before being stopped by Pedro Munhoz, Garbrandt will be hoping to address his slide down the bantamweight rankings and mount another charge at the belt.

He faces a perennial contender at 135lbs in Raphael Assuncao, who boasts victories over Dillashaw, Munhoz and Marlon Moraes, but is also hoping to mount a comeback following back-to-back defeats of his own.

With the bantamweight title now vacant following the retirement of Henry Cejudo, both Aljamain Sterling and Cory Sandhagen will be keen to show they deserve to compete for the belt when they meet this weekend.

Sterling is coming off the back of four consecutive victories, including a win last time out against Munhoz. Touted for a while as the future of the division, he now appears to have his all-round game in a position to challenge the best at 135lbs, and is the 4/5 favourite for victory on Saturday.

Sandhagen too looks well-equipped to deal with the competition at bantamweight, with impressive recent victories against John Lineker and Assuncao. The 28-year-old is now on a six-fight win streak in the UFC and will stake a huge claim to be the next belt-holder with a win over Sterling. He is currently Evens to dismiss Sterling.