UFC 253 preview: Adesanya to show his class against Costa

In the main event, unbeaten Israel Adesanya, aka ‘The Last Stylebender’, will put his middleweight title on the line against unbeaten Paulo Costa.

As one of the UFC’s brightest stars, Adesanya’s rise to the summit of the middleweight division has been nothing short of emphatic. He’s made a habit of targeting and beating the big names in the division, and having already dispatched of Kelvin Gastelum, Robert Whittaker and Yoel Romero in his last three fights, he now must turn his attention to Brazilian powerhouse Costa.

Costa has been out of action since his win over Romero in August 2019. Two of the wildest fighters in the UFC put on a show to remember that night, with Costa consistently doing what other men simply can’t, in walking down Romero. Perhaps most incredible was that he did it with a smile and came away with a unanimous points decision against one of the biggest names in the division.

It’s almost certain to be a mammoth clash. Costa only knows one way to fight, and that is on the front foot, being aggressive and looking for the finish. The Brazilian boasts 11 knockouts in his perfect 13-0 record, with none of his first nine fights going beyond the first round. He’s currently available at 11/5 to win by KO/TKO/DQ. One question he is yet to answer, though, is his ability to go five rounds. He looked somewhat jaded in the final round against Romero and if this does go for an extra 10 minutes, he’s 6/1 to win by decision.

In many ways Costa’s aggressive style plays to Adesanya’s advantage. His natural counter-striking ability and quick feet mean he will be able use his experience to set traps for his opponent and look to catch him coming forward. There’s perhaps no better example of this than with his title win against Whittaker, where Adesanya finished the fight with a picture-perfect right-left combination as Whittaker looked to land a big right hand. Adesanya is currently 8/5 to win by KO/TKO/DQ. He’s been the distance on several occasions and is 3/1 to win by decision. 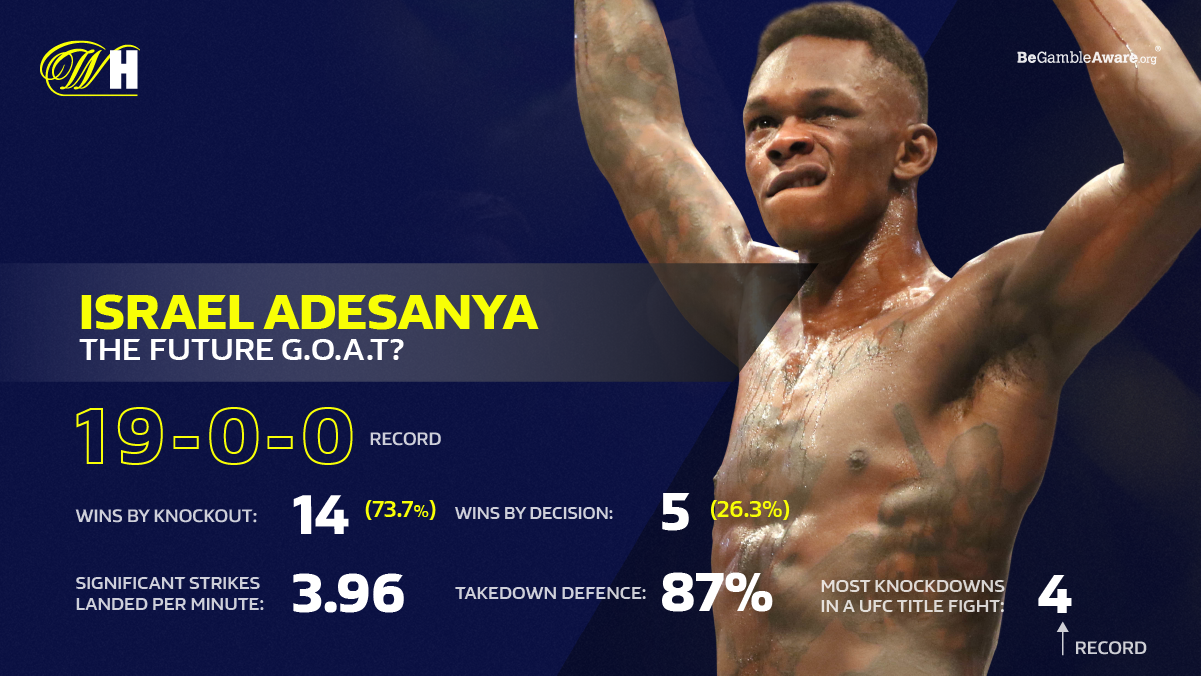 Saturday night will see a light heavyweight champion that isn’t Jon Jones or Daniel Cormier crowned for the first time in a decade, following Jones’ decision to vacate the belt and move up to heavyweight.

Reyes can count himself unfortunate to not be walking in with the belt, having arguably bettered Jones over five rounds back in February only to come out on the losing side of the judges’ scorecards. With Jones the only controversial blemish on an otherwise perfect 12-1 record, Reyes will be looking to add a UFC title to his resume to go along with some big-name wins.

Although seen as a finisher in his early fights, three of Reyes’ last four bouts have gone the distance. He has evolved his style significantly over the years and is now particularly well rounded both on the ground and on the feet. Reyes is 6/5 to win by KO/TKO/DQ and 11/4 to win via decision.

Blachowicz is a veteran of 34 MMA bouts, boasting a 26-8 record, including a three-fight win streak over Corey Anderson, Ronaldo Souza and Luke Rockhold. After a string of defeats early in his career, Blachowicz transformed himself physically, with his new-found power and speed making him a formidable advisory for any of UFC’s light heavyweights. His stand-up is the strongest part of his arsenal, and he has the ability to finish anyone on the night. He is 9/2 to win by KO/TKO/DQ and 17/2 to win via decision.