UFC Fight Island 2020 ends this weekend with arguably the best fight of them all: Khabib Nurmagomedov vs Justin Gaethje for the former’s UFC lightweight title.

Robert Whittaker vs Jared Cannonier, meanwhile, heads up the undercard. We preview both of the mouth-watering fights.

Khabib two wins away from a lifelong dream

Khabib boasts the joint-third longest winning streak in UFC history with 12, and his record of 28-0 in professional MMA fights is unprecedented.

It’s always been a dream for Khabib to reach 30-0 in professional MMA fights before retiring into the sunset, and a win against Gaethje could set up a super fight, supposedly Nurmagomedov’s last, against either Georges St-Pierre or Conor McGregor.

It’d be a tough ask to entice St-Pierre out of retirement, but if both Khabib and McGregor were to come through their next scheduled tests, a second fight between the pair could be on the cards for summer 2021.

Khabib will have to come through arguably the toughest test of his UFC career to date in former All-American wrestler Gaethje.

Although Gaethje’s background is littered with wrestling accolades, it’s his striking game that has shone through during his six-fight career in the UFC, most impressively ending Tony Ferguson’s 12-fight win streak in UFC Fight Island’s inaugural main event earlier this year.

With Fight Island set to close for 2020 with Gaethje in the main event, the year has come full circle for the 31-year-old, and we might just see his stellar wrestling experience tested like never before.

We can’t be sure that Gaethje will be able to deal with Khabib’s devastating ground pressure, but one thing is for certain, the challenger believes that it’s finally his time to rule as lightweight king, and you can get him at 13/5 to win the fight.

Unsurprisingly, Khabib heads the betting as a heavy favourite at 2/7, while his odds to end the fight by a signature submission have been enhanced to 9/4.

Each of Gaethje’s four wins in the UFC have finished by either KO or TKO, and you can get him to shock the world of MMA by doing so at 7/2. 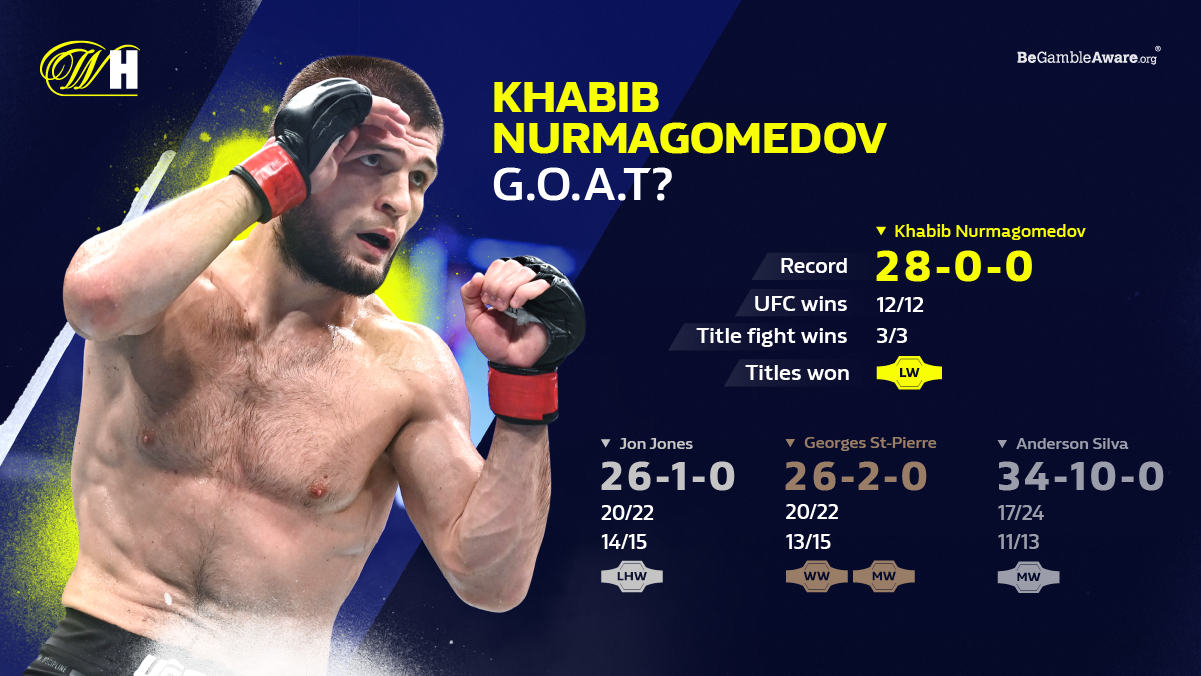 Middleweights clash for shot at Adesanya

Robert Whittaker returned to oversee a solid five-round victory over Darren Till in the summer, after seeing his middleweight title taken by Israel Adesanya in late 2019.

Victory against the resurgent Jared Cannonier would surely put him in contention to fight for the belt once more in 2021, but his opponent has looked a new force since his drop down to middleweight, unbeaten at 185 pounds in three fights.

But Whittaker’s pedigree at middleweight is undeniable, winning eight out of nine bouts at the weight during his UFC career – his only defeat in six years coming against current champion Adesanya.

This will be Cannonier’s toughest test of his career and he is 10/11 to win – the same odds as a Whittaker victory.