Rugby league fans, the Magic Weekend 2018 is here. Newcastle United’s St James’s Park will host six thrilling Super League fixtures on May 19th and 20th   in one of the country’s most anticipated rugby events and fans will be looking forward to the action. We’re just over halfway through the 2018 campaign and this weekend could be critical in the race to qualify for the Super 8s.

Salford Red Devils and Catalans Dragons will compete in this year’s curtain raiser before a juicy grudge match between Wakefield Trinity and Huddersfield Giants. Both teams have struggled to an extent but this could turn out to be the game of the weekend. To round off the weekend, Hull FC will face city rivals Hull KR in a fiery affair. 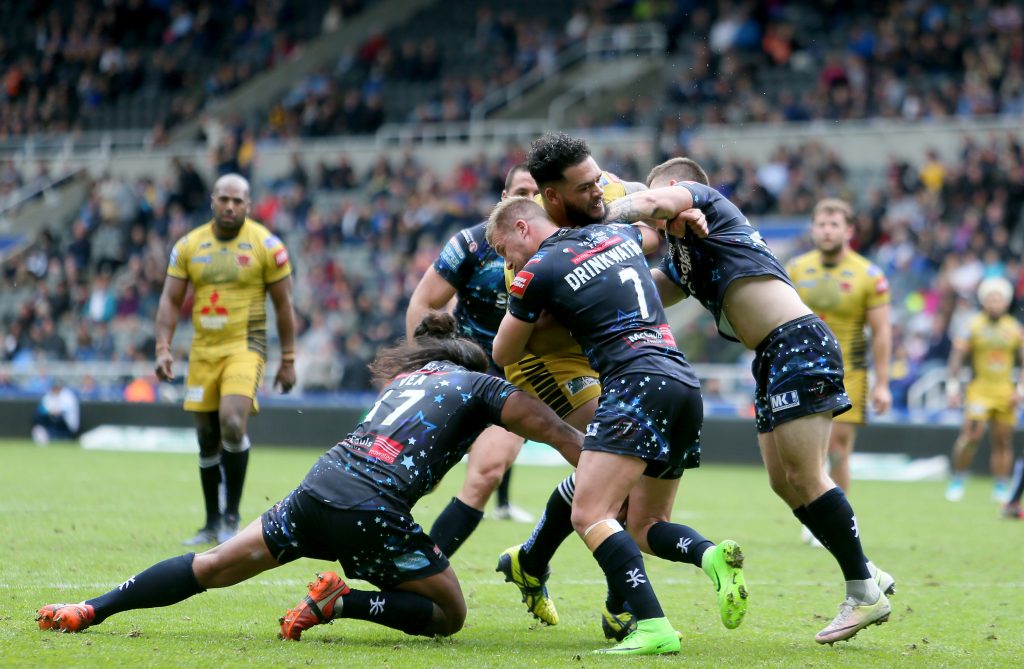 Salford Reds will be hoping to atone for their defeat to Leigh Centurions, who they faced in last year’s event

All six teams were in Challenge Cup action last weekend; Salford suffered a shock defeat to Championship side Leigh Centurions whilst Huddersfield booked their place in the next round after a hard-fought victory over Wakefield. A repeat of that fixture at St James’ Park just seven days later should be fascinating.

Five of these teams are in the bottom half of the table ahead of the Magic Weekend. Only Hull FC, Challenge Cup winners less than a year ago, are competing for the major honours at the top of the division. At the time of writing, Catalans are bottom of the Super League table and rugby league betting odds have the French outfit as favourites for relegation.

According to the latest Super League markets, Hull are 8/1 to win the 2018 Grand Final at Old Trafford this year. The Airlie Birds have been in supreme form in recent months and a win over Hull KR this weekend will cement their status as one of Super League’s biggest clubs. Without further ado, let’s take a look at Sunday’s three fixtures…

Salford will fancy their chances against a struggling Catalans side in Sunday’s opener. The Red Devils are EVS to secure another win but punters should take confidence from their recent results in this fixture.  The side from the North West earned a win over Leigh last year but Catalans saw themselves defeated in Newcastle. Salford have won their last two against Catalans, including a 32-18 triumph back in April. The 11/2 available for Salford to win by 6-10 points looks tasty.

Huddersfield, five points behind Wakefield in the Super League table, will try to follow up on last week’s Challenge Cup win with a second win in a row against Trinity. Both sides will be hoping for a repeat of last year’s action, as they secured tight wins. Simon Woolford’s side have a good record against Wakefield with three wins in their previous four encounters and 11/8 is a decent price for a Giants victory.

Finally, we have Hull FC versus Hull KR. One team is battling near the top of the division and the other is fighting to avoid relegation. Hull KR will be looking forward to their return to one of rugby league’s main events, while the Black and Whites will be looking to avoid the 45-0 thumping they received at the hands of St Helens last year. 2/5 for the Airlie Birds to win here represents solid value; the Magic Weekend is difficult to predict but rugby league fans will be confident of a Hull FC win.

Our top tip ahead of Sunday’s action? Salford at EVS is worth backing. Catalans have always struggled in Super League away fixtures and their Magic Weekend form is poor. A miserable defeat to Huddersfield at this event last year summed the French side’s season up and the Red Devils could run riot. A treble on Salford, Huddersfield and Hull FC pays handsomely at 11/2.