Ronnie O’Sullivan career profile: All you need to know about the snooker champion

Once in a lifetime, a sportsperson comes along who simply sings to a different tune. Somebody whose greatness supersedes their sport to the extent that they become cultural icons in their own right.

When it comes to snooker, that man is Ronnie O’Sullivan.

The man who would go on to be named ‘The Rocket’ launched his career by making the quarter-final of a professional-amateur competition in Stevenage, where he would face then world number 32 Marcel Gauvreau.

Ronnie would put together a vintage 120 break in the final frame to seal victory, leaving fans and Gauvreau himself aghast. Speaking afterwards, Gauvreau said: “He is unbelievable. Where did he come from?”

O’Sullivan would go on to win the tournament, announcing himself to the snooker world in the process. Gauvreau would certainly not be the last great player to be blown away by O’Sullivan’s natural ability.

In his first year on the circuit, Ronnie won 47 out of 76 of his matches, including a run of 38 straight wins and would go on to become UK champion for the first time in November 1993 at the UK Championship.

His second major title came less than a year later, as he beat James Wattana in the 1994 British Open final, before racking up seven more by the turn of the Millennium. The future of the game had arrived, and nobody was safe from his genius.

O’Sullivan’s first World Championship title came in 2001. In truth, it felt like it had been a long time coming. O’Sullivan was already one of Britain’s most well-known

sportsmen, and the victory did nothing to dampen the feeling, or the pressure that accompanies such greatness.

The floodgates had opened, and O’Sullivan would rack up five more World Championship crowns in the next two decades. He would also become a record seven-time Masters champion. He has won more Triple Crown Series trophies (20) than any other player in history and also holds the record for the most professional ranking titles with 37.

As comfortably the greatest break-builder in the history of the game, nobody can come close to Ronnie’s 1,063 professional century breaks, let alone his record of 15 maximum breaks. His incomparable 147 during the 1997 World Championship took just five minutes and eight seconds to complete, the fastest of all-time, and it is easily the most accessible testimony of his sheer genius. If you haven’t watched it already, do it now. You won’t regret it.

After a seven-year wait, O’Sullivan’s 2020 World Championship was arguably the most impressive of his career as he fended off a host of talent, including Kyren Wilson in the final. Aged 44 and 254 days, Ronnie added another record to his bulging catalogue as the oldest player to win a world title in over four decades.

O’Sullivan will be competing in the upcoming UK Championship, which starts on 23rd November, and is currently 7/2 to win the tournament and add another title to his incredible CV.

Check out all the latest snooker betting odds at William Hill 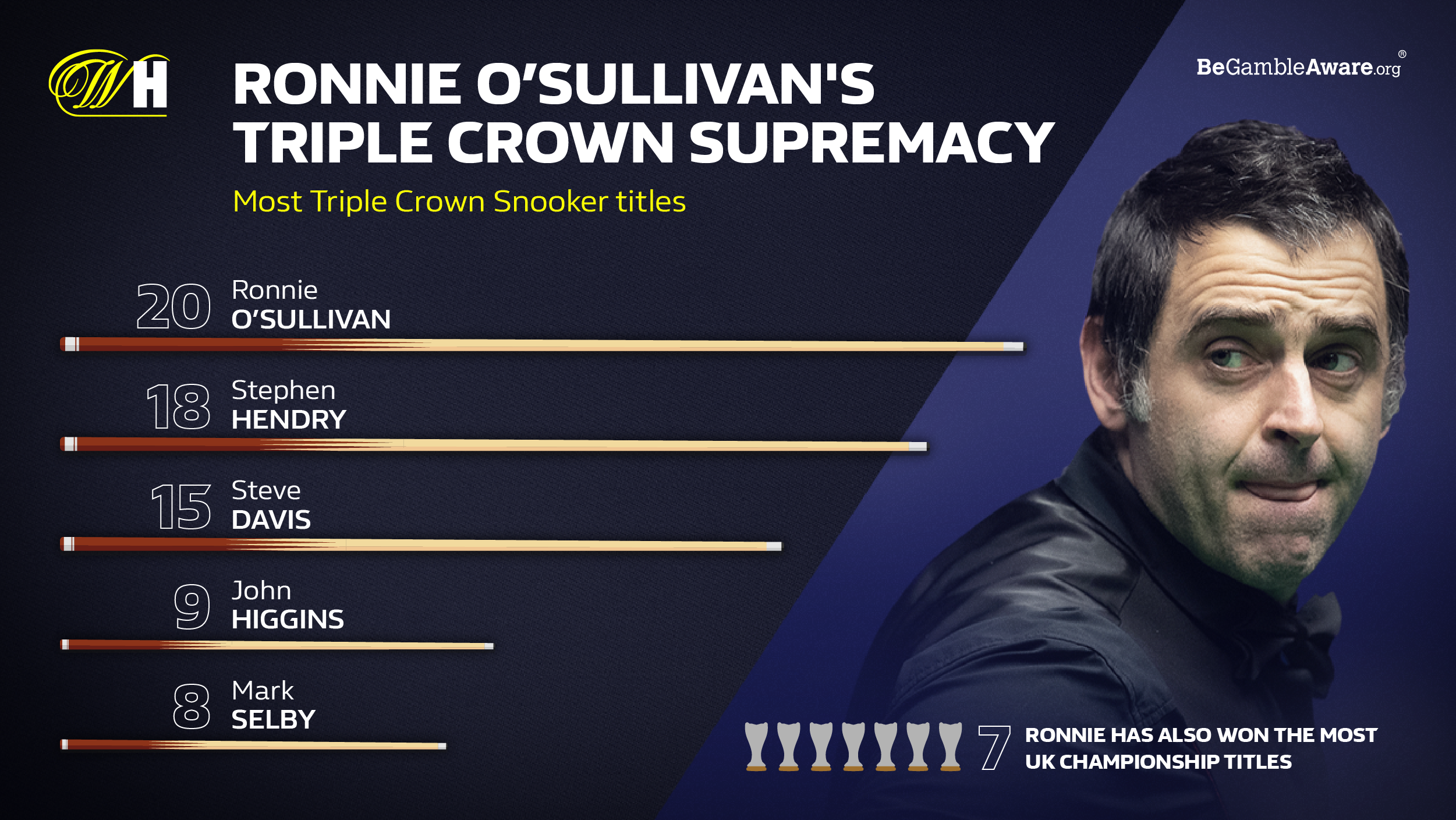