Hot on the heels of Cheltenham comes the Grand National Festival at Aintree in Liverpool. Held over three days, there’s no shortage of quality with former champions and Cheltenham winners all lining up to win valuable prizes.

This year sees Liverpool’s NHS Day on Thursday 8th April, followed by Ladies Day (Friday 9th April) and Grand National Day (Saturday 10th April). There are seven races each day with the likes of the Aintree Hurdle and the Melling Chase headlining the bill on the first two days.

Then, on Saturday, the eyes of the nation will find their way to a TV screen to watch the Grand National – one of the most-anticipated races of the year. Forty runners and riders will tackle 30 fences and the four-mile-two-and-a-half-furlong trip, but who’ll write their name into racing folklore?

The opening day of this year’s Grand National meeting sees four Grade 1 races, and there’s some crossover with Cheltenham.

The Aintree Hurdle at 3:25 is the feature race on the card and could see several runners from the Champion Hurdle in action. Buveur D’Air won this race in 2017 and Nicky Henderson decided against running him at Cheltenham to keep him fresh for a tilt at this race. Can he win it for a second time?

One of the other highlights on the opening day is the Aintree Bowl, which gives some of the top staying chasers another shot at glory after a potential Gold Cup run. King George winners have done well in this race in recent years – Cue Card and Silviniaco Conti won both.

In 2019, Clan Des Obeaux chased home Kemboy and Paul Nicholls’s charge looks set to feature in the race again with him suited to this flatter track. So far this season, he’s had a few near misses, finishing second in both the Lancashire Chase and Denman Chase. So, can he go one better on Merseyside? 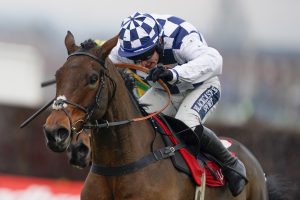 Let’s rewind and look back at who on this card back in 2019.

Kalashnikov was the first winner of the meeting in the Manifesto Novices’ Chase for Jack Quinlan and Amy Murphy.

He was quickly followed by Pentland Hills. He proved his win in the Triumph Hurdle at Cheltenham wasn’t a fluke by getting the better of Fakir D’oudairies in the Anniversary 4-Year-Old Juvenile Hurdle.

Then, the three of the next four races went to Ireland with Kemboy, Supasundae and Moon Over Germany all returning to the winners’ enclosure.