The upper reaches of the outright betting in tennis’ Grand Slams has largely been a closed shop in recent years, but at the Australian Open the markets for both the men’s and women’s draws feature an interloper within the most-fancied quintet pre-tournament.

Karen Khachanov is joint-fifth behind favourite Novak Djokovic among the men, while Aryna Sabalenka occupies the same position behind a quartet of major winners headed by Serena Williams over in the ladies.

So who are the pair of dark horses the William Hill traders expect to go deep at Melbourne Park?

The 22-year-old Russian first began making a name for himself at the highest level in 2017, with wins over top-10 world-ranking players David Goffin and Kei Nishikori and a journey to the fourth round at Roland Garros, in which Tomas Berdych and John Isner were ousted along the way.

However, the 6ft 6in colossus really announced himself as having the potential to go right to the top as recently as the Paris Masters in November 2018, when he capped off another year of wins over top-10 foes and another two fourth-round Slam sorties with victory.

Dropping just one set across the six matches, he disposed of Alex Zverev, Dominic Thiem and Novak Djokovic in successive outings, on the back of strong movement, a solid defence, a powerful serve and a seriously heavy forehand.

The question was always going to be how will Khachanov react, with that being his final tournament of 2018?

So far he’s two and two this term, twice beating Thiem in an Abu Dhabi exhibition competition where he also lost to Djokovic, before bowing out in the first round in Doha against Stanislas Wawrinka.

The Australian Open men’s draw has certainly afforded him a good opportunity to reach another Slam fourth round. He’s trading at odds of 1/8 to beat world number 60 Peter Gojowczyk in the first round and the injury-hampered Andy Murray and Marin Cilic are the biggest threats in his section.

However, at the quarter-final stage the difficulty suddenly hits a vertical upward trajectory with Khachanov on course to clash with Roger Federer. 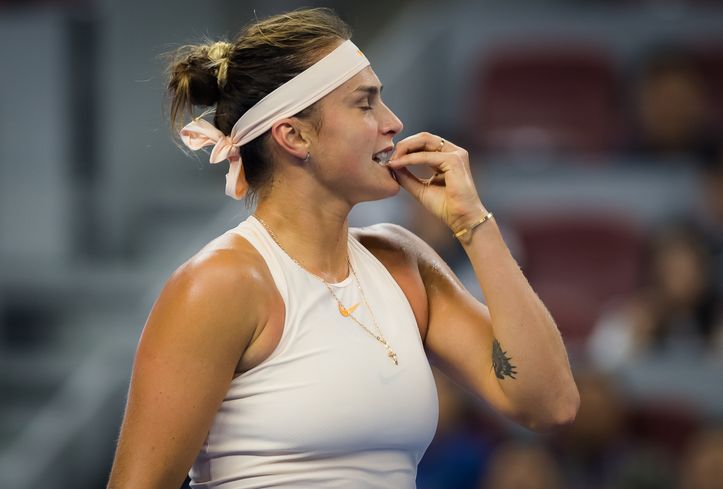 Sabalenka trades at 11/1 as tournament winner

How Sabalenka’s star has risen since she was bounced by home heroine Ashleigh Barty in the first round at last year’s Aussie Open.

A finalist at Lugano and Eastbourne on the 2018 clay and grass-court jags respectively, she took out big names such as Karolina Pliskova and Madison Keys en route to the semis at the Cincinnati WTA on the hard stuff, before tournament wins on similar surfaces at New Haven and Wuhan.

The Belarusian started off 2019 in identical fashion, winning six straight matches to triumph at the Shenzhen WTA event, with rivals including Maria Sharapova left trailing in her wake.

A defeat to Petra Kvitova in Sydney in her sole outing since serves as a timely reminder that Sabalenka’s game and, in particular her serve, still lack the consistency the very best players can call upon.

Yet, for a player so young, her mental strength is noticeable. After losing the first set to the Czech 6-1, she fought back until she was in a position to win the second, before eventually going down 7-5. In Shenzhen she lost the first set in the final, before taking a tie-break en route to victory.

Sabalenka is 1/6 to see off world 167 Anna Salinskaya in the first round at the Australian Open and has lucked out in being bracketed on the other side of the draw from Simona Halep, Serena Williams and 2018 US Open winner Naomi Osaka.

Check out all the latest tennis betting at William Hill