Tim Henman will always be remembered as a hugely successful tennis player and he became the most successful British man in the sport for over fifty years. He reached number four in the world rankings, beat Roger Federer on a number of occasions and regularly reached the semi-finals of Wimbledon. Despite these achievements, he is largely regarded as a player who never quite fulfilled his full potential and regularly fell short during those crucial, match-winning moments. Was the enormous weight of expectation from the British public and media too much for Henman to handle? Or was he simply competing during a phenomenally tough and competitive era?

Tim Henman remains hugely popular around SW19 and is still on the main committee for the All England Club. His performances at Wimbledon were always greatly anticipated and there was a huge amount of expectation whenever he took to the court. Sadly, he was unable to deliver a title in west London and despite shouts of “come on, Tim” ringing around Centre Court, he wasn’t able to succeed at the tournament.

Wimbledon was always Henman’s preferred slam and he relished playing on the grass courts. Despite a couple of semi-final appearances at the French and US Open, he came closest to breaking his duck at SW19.

He announced his arrival in 1996 by reaching the quarter-final of Wimbledon where he lit the touchpaper of expectation amongst the British public. Even non-sports fans would pay a passing interest in Tim Henman’s progress at the third Grand Slam of the season and his 1998 semi-final four-set defeat to the mercurial Pete Sampras had the entire nation captivated. He had become the first Briton to reach this stage since 1973 and beat Pat Rafter en-route but despite the fierce patriotism within the venue, it was Sampras who prevailed.

It was deja-vu just twelve months later as Sampras ended Henman’s winning sequence with yet another four-set success in the semi-final. The Brit secured the opening set and expectation was high but Sampras found an extra gear and the hopes of the home crowd were dashed once more.

Henman’s epic battle with Goran Ivanisevic in 2001 is one of the more memorable matches of the last twenty years with the Oxford-born player coming within two points of securing a place in the final. It was a rain-interrupted game which further eked out the pain for British tennis fans and it was the Croatian who eventually booked his place in the showpiece.

His crushing defeat to Lleyton Hewitt in the 2002 semi-final was a particular low-point in Henman’s career and although he reached two more quarter-finals, he called time on his career having never made it beyond the final four at Wimbledon.

Tim Henman became a beacon of national hope and, for two weeks each year, he flew the flag for Great Britain and became a symbol for misplaced sporting optimism. Dubbed “Henmania”, his dedicated fans regularly descended upon SW19 and tennis enthusiasts up and down the country gathered in pubs and living rooms to follow the progress of the home hope. Fans winced at every unforced error, cheered at each successful half-volley and regularly imparted words of encouragement throughout the contest but any optimism accrued during the early stages of the slam soon turned to anguish and despair.

Whether it was rain or shine, the nation was continually gripped by “Henmania” and generations of sports fans came together to follow the fortunes of Tim. He had a great connection with his fans who lived and breathed every single point and his willingness to do it for his country was a significant part of his appeal. That common goal played a major part in his unwavering popularity amongst the British public and the nation came together in collective disappointment whenever he was knocked out of a slam. 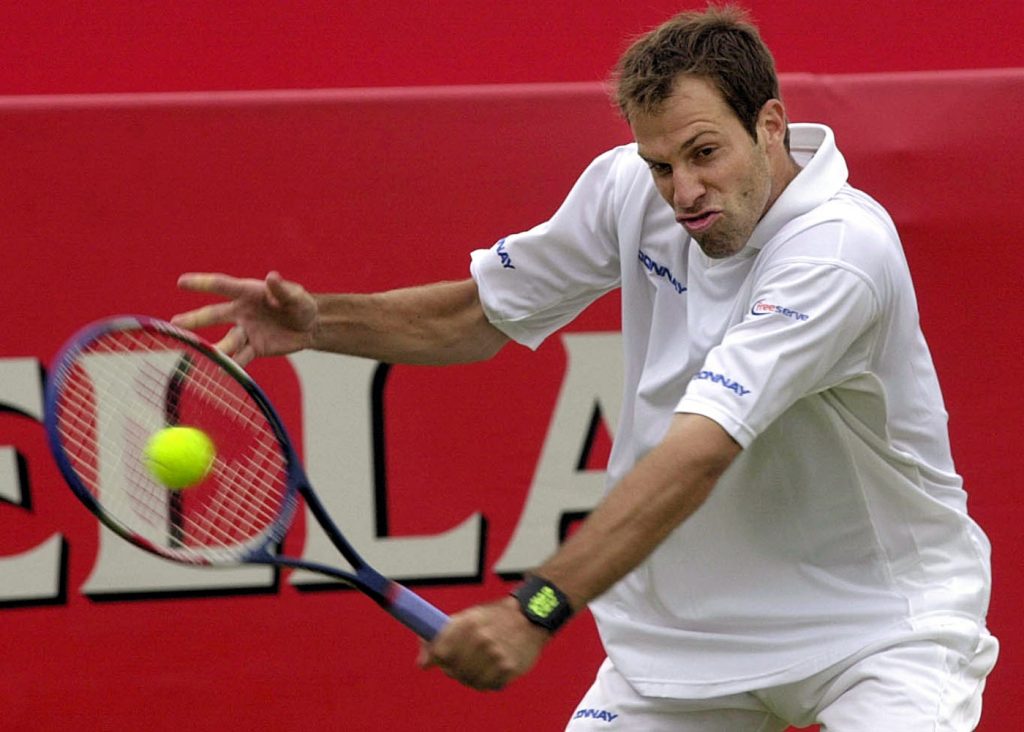 Greg Rusedski was Britain’s number two but having been born and raised in Canada, the public failed to take to him in the same way and his lacklustre performances failed to capture the imagination of the average tennis fan.

British tennis had been through a barren patch and success in this sphere had been thin on the ground so Henman’s arrival sparked a wave of hope and expectancy. It can’t have been easy for him to carry this burden and it may have played some part in his failure to make it past the final four at Wimbledon. Since his retirement, he has spoken of his despair at the lack of top-class British tennis players to have followed in his footsteps. Although, the success of Andy Murray and the emergence of Kyle Edmund has changed all that.

Whilst some analysts will conclude that the weight of expectation on Henman will not have helped his cause, there are also some arguments to suggest that he was simply unlucky to have played in such a competitive era. The sport has always produced a number of superstars but Pete Sampras was particularly dominant during the 1990s and had Henman not bumped into the American in two successive semi-finals, there is a high chance he may have finally reached the final two.

John McEnroe suggested “maybe he has played to the limit of his ability” before adding, “I think he has been the best he can be and I think he should be more appreciated for it”. Very few players reach the elite level and Henman was undoubtedly hugely talented. A young Roger Federer was starting to emerge, Lleyton Hewitt was one of the finest hitters on the circuit and with the likes of Richard Krajicek and Pat Rafter regularly reaching the latter stages of Wimbledon, there was always plenty of competition.

Goran Ivanisevic emerged from the shadows and was sometimes referred to as “the barn door”. He was impossible to pass and the lofty Croatian proved a thorn in the side for Henman.

The media often refers to the “Big Four” with Rafa Nadal, Novak Djokovic, Andy Murray and the aforementioned Roger Federer dominating the game during recent years but it was equally as competitive in the late 1990s and early 2000s – perhaps Tim Henman peaked with his semi-final appearances.

Very few players could match the majesty of Pete Sampras and perhaps Henman should be given a little more credit for competing admirably with the seven-time Wimbledon winner. The weight of expectation certainly played its part and despite previously dismissing the suggestion that he struggled to carry the nation’s hope, this will surely have played a huge part. Britain was seeking a new sporting hero and demanded success but unfortunately, Henman was unable to deliver it. His achievements should be toasted and his performances certainly kept the country captivated but despite his overwhelming popularity, he was unable to provide that much-needed triumph in west London.