Pacquiao on points? Broner by KO? What are you predicting?

Manny Pacquiao won the WBA (regular) welterweight title when stopping Lucas Matthysse inside seven rounds in July in Malaysia. He now makes the first defence of this secondary title against Adrien Broner at the MGM Grand in Las Vegas, with the bout available to view for free on ITV4 this weekend.

There are numerous reasons why Pacquaio is the correct favourite at 4/11 to make a successful first defence of his current title.

Not only is he the defending champion, but his boxing pedigree is also much more established.

Furthermore, he arrives confident following his stoppage of Matthysse, even if the Argentine is not known to have one of the more durable chins in the game.

Broner is the 21/10 underdog and victory here would still represent his biggest career win, even though the Pac Man is well into his veteran years.

Despite his relatively high profile, the 29-year-old has often been found wanting when stepping into the ring with the elite, losing previously to Marcos Maidana, Shawn Porter and Mikey Garcia.

He is arguably lucky to be getting this opportunity, given he has failed to win both of his last two bouts. 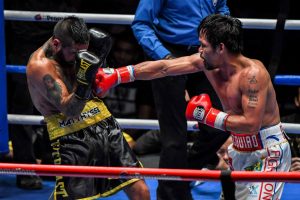 Will Manny Pacquiao reign supreme once again against Adrien Broner?

Neither of these two fighters are especially big by welterweight standards and neither truly have the one-punch power capable of ending a bout on the spot.

Much could hinge on how the style of the fight pans out.

Rewind the best part of a decade when Pacquiao was at his best and he won fights through his mobility, work rate and pure speed. He often drew opponents into chasing him around the ring, then landed quick combinations before they had the chance to set their feet.

When Pacquiao looked vulnerable was when he was forced to do the chasing. Given that Broner is a classic counter puncher, he will be looking for Pacquiao to lead out.

Understandably given that he’s now aged 40, Pacquaio has lost a step, or maybe two, from his pomp too, which may potentially prevent him from fully exploiting any openings he creates.

Even if he is 40, Pacquiao is almost guaranteed to outwork Broner, who has failed to win any of his last three bouts that have gone the distance.

You can bet on round betting for Pacquiao vs Broner here 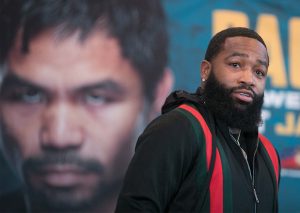 Despite his age, Pacquiao brings something completely different to the fight.

Given that Broner has never been stopped in his career either, Pacquiao on points by decision or technical decision at EVS in our Pacquiao vs Broner predictions is a tough bet to oppose.

For Broner supporters, there’s little point in backing him to win should the fight be decided by way of the judges’ scorecards.

Therefore, there may be some value in the 5/1 that he triumphs by KO, TKO or DQ.

Not got a William Hill account? Sign up here and get your hands on our bet £10 and get £30 offer