The Final Round | Time for Dubois to shine

Joe Cordina became the latest British world champion on Saturday with his stunning knockout of Kenichi Ogawa. This weekend two more British fighters will hope to put themselves in the picture for future world title shots.

In the latest edition of The Final Round, David Alorka and Gareth A Davies look ahead to both fights, and chat about impressive wins for Cordina and new lightweight king Devin Haney.

Speaking about Bryan v Dubois, Gareth said: “It’s a brilliant opportunity [for Dubois]. An opportunity to get into the waiting room for the heavyweight world titles.

“I’ve never really rated Trevor Bryan at the very top level of the heavyweight division. I think he’s just below world level. I think Daniel gets the job done, he gets it handily, and I expect him to stop Trevor Bryan within seven rounds.”

Gareth also expects Riakporhe to have his arm raised when he takes on Fabio Turchi.

“Riakporhe knows what he is now,” he said. “He’s a destroyer, an aggressive fighter.

“He knows that Turchi lost to Tommy McCarthy, a split-points decision. He knows that he’s stopped McCarthy, he’s wiped out most of the British opposition, apart from Lawrence Okolie, of course, but he’s wiping out European opposition.

“A world title fight is not very far away. This will be a good fight. Turchi likes to go into action, but I think Riakporhe gets the stoppage by the midway point again.”

It’s 4/1 that the fight ends in rounds five or six, while Riakporhe to win in round six is currently priced at 9/1. 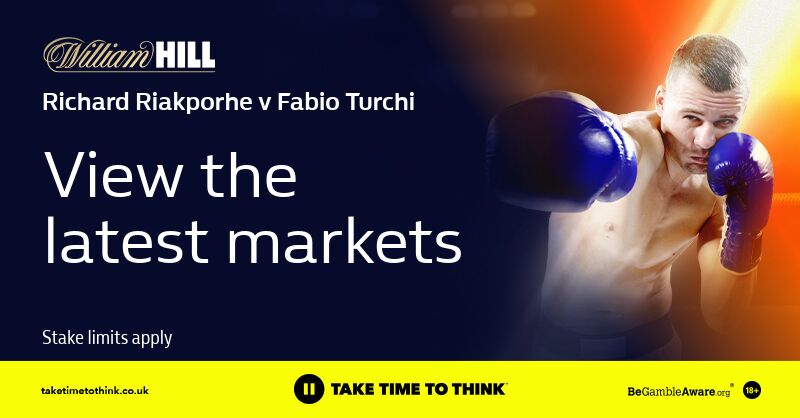 Devin Haney unified the lightweight division with his win over George Kambosos Jr last weekend. Gareth believes the American should delay a rematch and look to take on Gervonta ‘Tank’ Davis or the great Vasyl Lomachenko.

He said: “Devin Haney was brilliant. He commanded the range and the fight itself, the momentum of the fight, behind a brilliant jab.

“Skills pay the bills in boxing, and he really did show how brilliant his skillset really is. He varied his jab, he used elusive movement and footwork, and Kambosos, frankly, was never in the fight.

“Should they have a rematch? I’m not really sure. I think Haney proved that he is levels above Kambosos in terms of boxing skills. I would much rather see him fight ‘Tank’ Davis or Vasyl Lomachenko.”

As for Cordina, Gareth believes the Welshman should try and tempt Shakur Stevenson to the UK.

“We expected Joe Cordina to have to outbox Kenichi Ogawa, but he pulled off a brilliant punch, he squared Ogawa up in the second round, hit him with a big right hand, that is clearly one of the knockouts of the year. Massive victory for him!

“This sets up another exciting prospect, Shakur Stevenson, who holds two of the belts at super feather, saying he’d love to fight him at 130 pounds. Can we get Shakur Stevenson over here? That’s a brilliant fight for Cordina, the British fans and I think for Shakur Stevenson as well.”