The greatest darts matches of all time

On and off the oche, darts has gone from strength to strength in the last decade.

The 2021 William Hill Darts World Championship highlights the levels of growth that have been witnessed, with an increase in the field to 96 players and a record £2.5 million in the prize pot. Some £500,000 of this will head in the direction of the winner.

There are reasonable grounds to believe that at least one classic will materialise at Alexandra Palace, but will they rival or better the top matches in darting history?

Here is our collection of the top 10 darts matches of all time, in no particular order.

Taylor was already a 13-time world champion and Van Barneveld was participating in his first PDC final, having jumped across from the BDO, where he’d been a four-time champion, earlier in the year. To many, this was the dream final, with the potential to be an epic.

However, the Dutchman soon found himself 3-0 down in sets, with Taylor intent on building on a 21-match winning streak at the Circus Tavern. A whitewash was suddenly looking a more likely scenario than an epic.

Then Van Barneveld began to pick up in a big way, buoyed by the first 170 checkout of the tournament. Soon the score was 6-6 and a deciding set was required.

The first 10 legs of the decider went with throw, with Barney missing three match darts. He then missed another in the sudden-death leg, but Taylor couldn’t capitalise.

Van Barneveld eventually hit tops for the title, with both players finishing with three-dart averages north of 100 (Taylor = 100.86, Van Barneveld = 100.55). 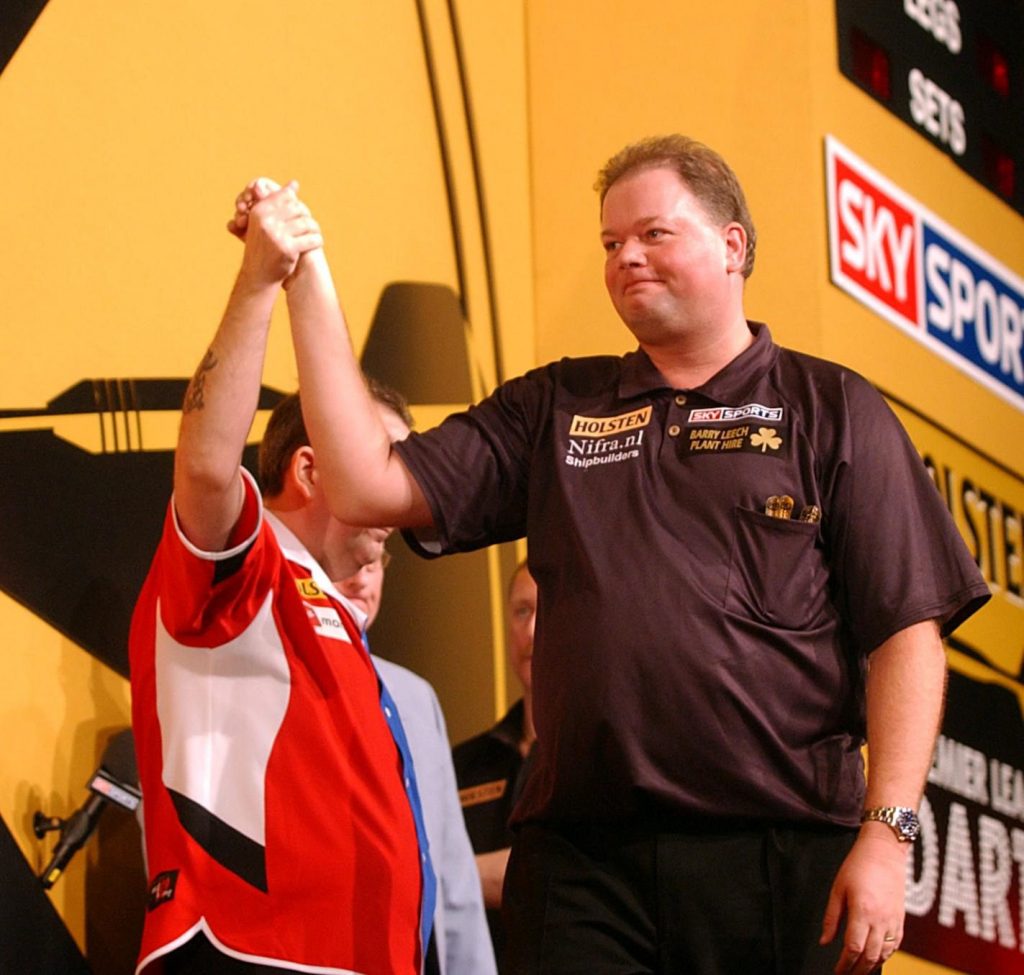 Another year and another last-leg shootout to determine a winner at the sport’s biggest tournament.

Rewind 12 months and Cross was watching the event on television while still a member of the Challenge Tour.

He had then cut the power on his career as an electrician and embarked on a fairytale first season with the PDC, winning over £300,000 in prize money and securing four tournament victories.

Cross hung with Van Gerwen throughout, although the world number one let himself down by missing 58 doubles during the match.

This included five match darts at 5-4 in the deciding set, before Cross missed double 16 for a 140 checkout in the sudden-death leg.

Van Gerwen then missed the same double, allowing Cross to take double eight for the match, which featured 230 scores of 100 or more. 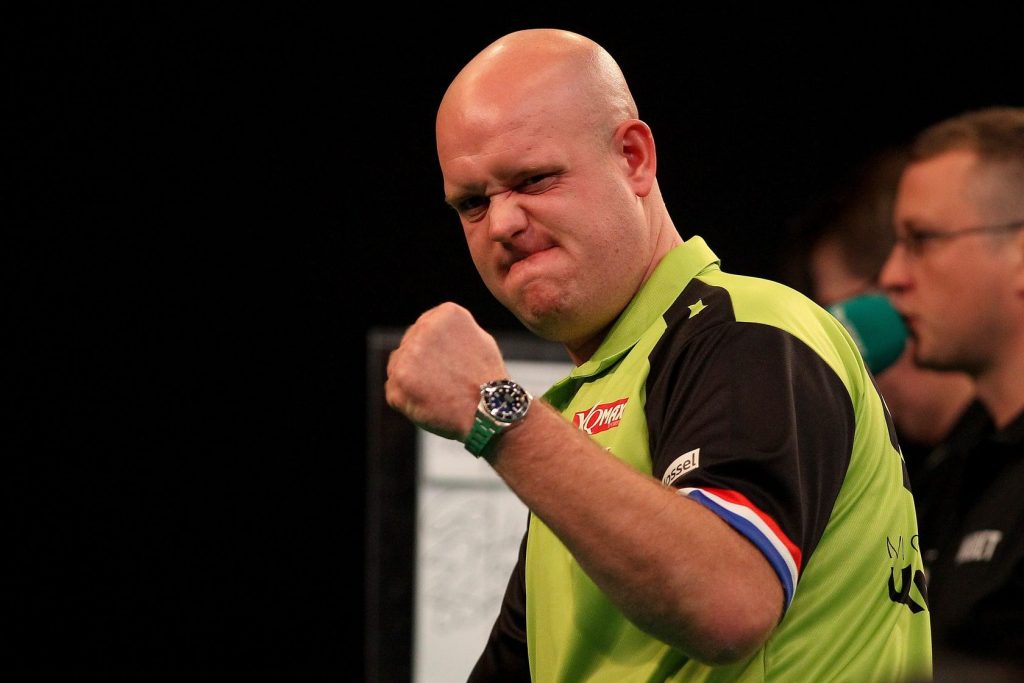 From the moment that Taylor fired in 180 with his first three darts of the match, it was clear that the standard in the race to 16 legs was going to be scintillating.

Taylor triumphed over his fellow tungsten tosser 16-9, but the treble-20 bed was obliterated throughout in a match that quickly followed a pattern of prize fighters constantly trading their biggest blows.

There were 32 maximums thrown in the 25 legs, with Taylor averaging 109.46 and Lewis a mind-boggling 110.99. Never had more 180s been hit in a PDC match and never had a player lost with such a substantial average.

Taylor revealed in the aftermath that the match was the “best I’ve ever played”, although this is more in terms of overall quality than nail-biting drama. 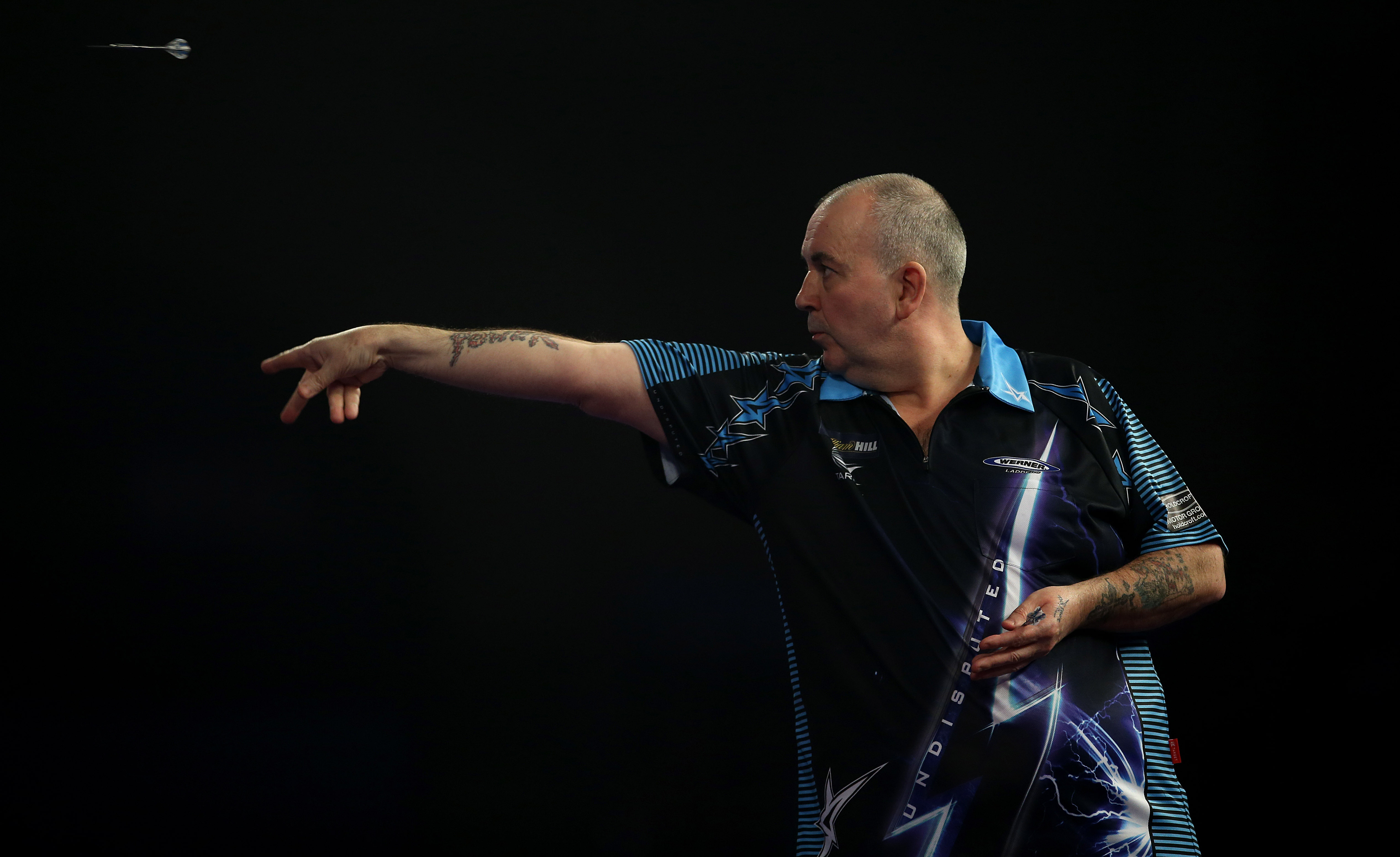 Phil Taylor came out on top against Adrian Lewis

Bristow was considered the main man in darts, securing the world title in both 1980 and 1981. The hat-trick was expected in 1983 as he faced 23-year-old qualifier Deller in the final.

Not that Deller was expected to be a pushover, having dumped 1982 finalists Jocky Wilson and John Lowe during the earlier rounds. Deller then led 3-1 and 5-3 in the race to six sets.

However, his moment seemed to have gone when missing six darts for the title. The Crafty Cockney pounced on his lifeline to level at 5-5, before taking the first leg of the opening set against the throw to lead for the first time in the match.

Deller responded to move to within one leg of the title and set himself up with a 138 finish. Bristow had a dart at bullseye to level again, but made the percentage play to target single 18 instead.

This proved the wrong move as a Saturday afternoon BBC audience of 8.3 million watched Deller hit treble 20, treble 18 and double 12 for his first and only world title.

Victories in 2007, 2008 and 2009 meant that Taylor was the only player to have previously won the Grand Slam of Darts, although a defeat in the 2010 group stage to Ted Hankey offered some hope that he could be beaten.

Then up stepped Beaton in the quarter finals in a best of 31 legs.

The Bronzed Adonis looked good for a while, but once Taylor moved 13-9 clear with an average north of 100, it seemed that normal business would continue.

Yet after needing eight of the last 11 legs for victory, Beaton was back at 14-14 following a collection of clutch checkouts.

Taylor then missed four darts to win the 29th leg before Beaton wrapped up the match on throw with a fifth leg on the spin, despite making hard work of tops by hitting a single five.

For one night at least, Beaton became The Golden Adonis. 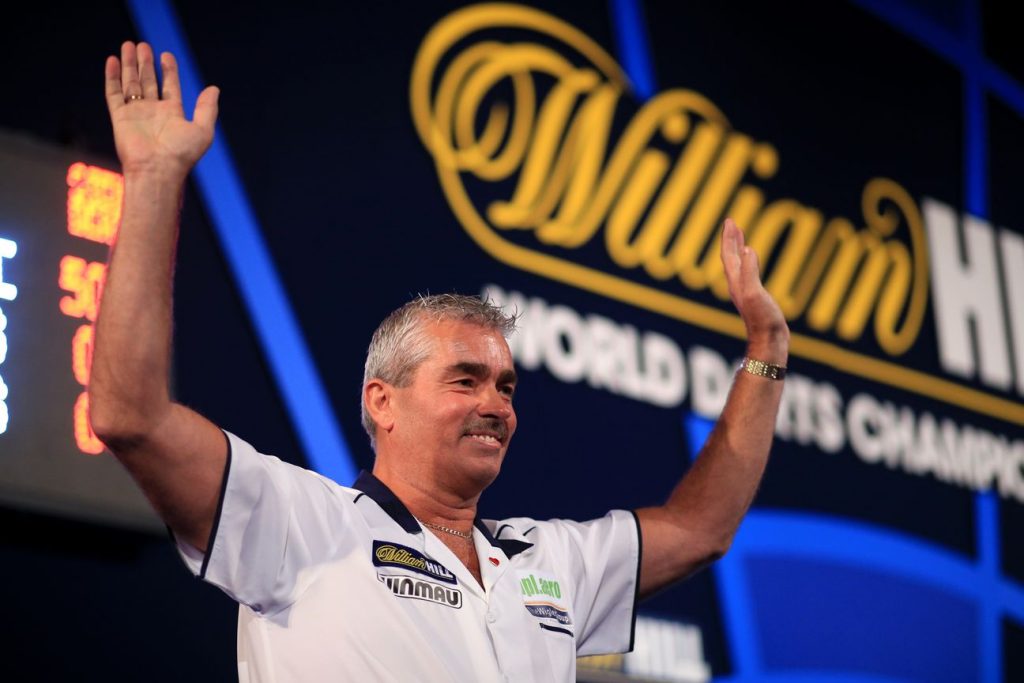 The old timer against the new generation was an obvious build-up to this semi-final, with Bristow arguably a decade past his prime and Taylor on the brink of reaching his.

However, this tournament offered the chance of one final swansong, where everything clicks and a player miraculously rediscovers their form of old.

Such tales occur from time to time in sport. Tom Watson forcing a play-off at the 2009 Open Championship golf at the age of 59 springs to mind.

A whitewash to Taylor was a real possibility, yet Bristow kept on the coattails of his protégée through the early sets in a race to five.

Yet, the game looked up as Taylor moved ahead 4-3 in sets and 2-1 in legs. Needing a single leg for the match, he left double four, with Bristow on 141 – the common finish for players pursuing the holy grail of a nine-dart leg.

Bristow had shown no signs previously that such a finish remained in his arsenal, but in went the double 12 and out came a few well-chosen words in Taylor’s face.

A deciding set was forced and two clear legs were needed for victory. Taylor eventually wore down the veteran and despite missing three darts at 32, he progressed to the final. 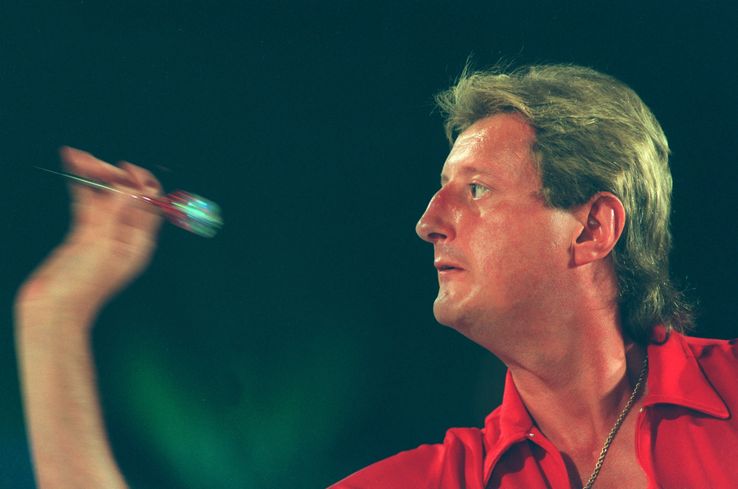 Eric Bristow in his glorious pomp

In the 12 months leading up to Alexandra Palace, Van Gerwen’s roll of honour included wins in The Masters, UK Open, Matchplay, Grand Slam of Darts, European Championship and Players Championship.

He was unbeaten in over two months and in 25 televised darts matches.

Van Gerwen had also won 11 of the 14 meetings with fellow Dutchman Van Barneveld in the same timeframe. The world number one was close to unbeatable and odds-on to win the tournament before an arrow had been thrown.

However, despite averaging 105.78, MVG lost 4-3 in sets to an inspired Van Barneveld at the World Darts Championship.

Perhaps the turning point came in the fifth set, with Mighty Mike throwing first and needing a leg to move into a 3-2 lead in sets.

With his opponent having just thrown a 180, Van Barneveld was way back on 304, effectively needing to check out in six darts to save the set. What followed was a maximum and then a 124 finish on double 11.

This semi-final comes nowhere close to matching others on this list in terms of drama, but it did provide edge-of-the-seat, nail-biting moments in another way.

Van Gerwen had already threatened a nine-dart finish in his quarter-final victory over Adrian Lewis, throwing six and then seven perfect darts against the back-to-back defending world champion.

Against Wade, MVG finally went all of the way, scoring 180, 177 and 144 in successive visits to the oche to complete the milestone. He had accomplished the same feat at the Matchplay earlier in the same year against Beaton.

The Dutchman again left 24 after 17 perfect darts, but marginally missed inside the double-12 wire.

Ironically, despite this two minutes of excellence, Van Gerwen still lost the fifth set to Wade. Although he did win the match 6-4.

He had to wait another 12 months though to win a maiden world title, after losing the 2013 final to Taylor. 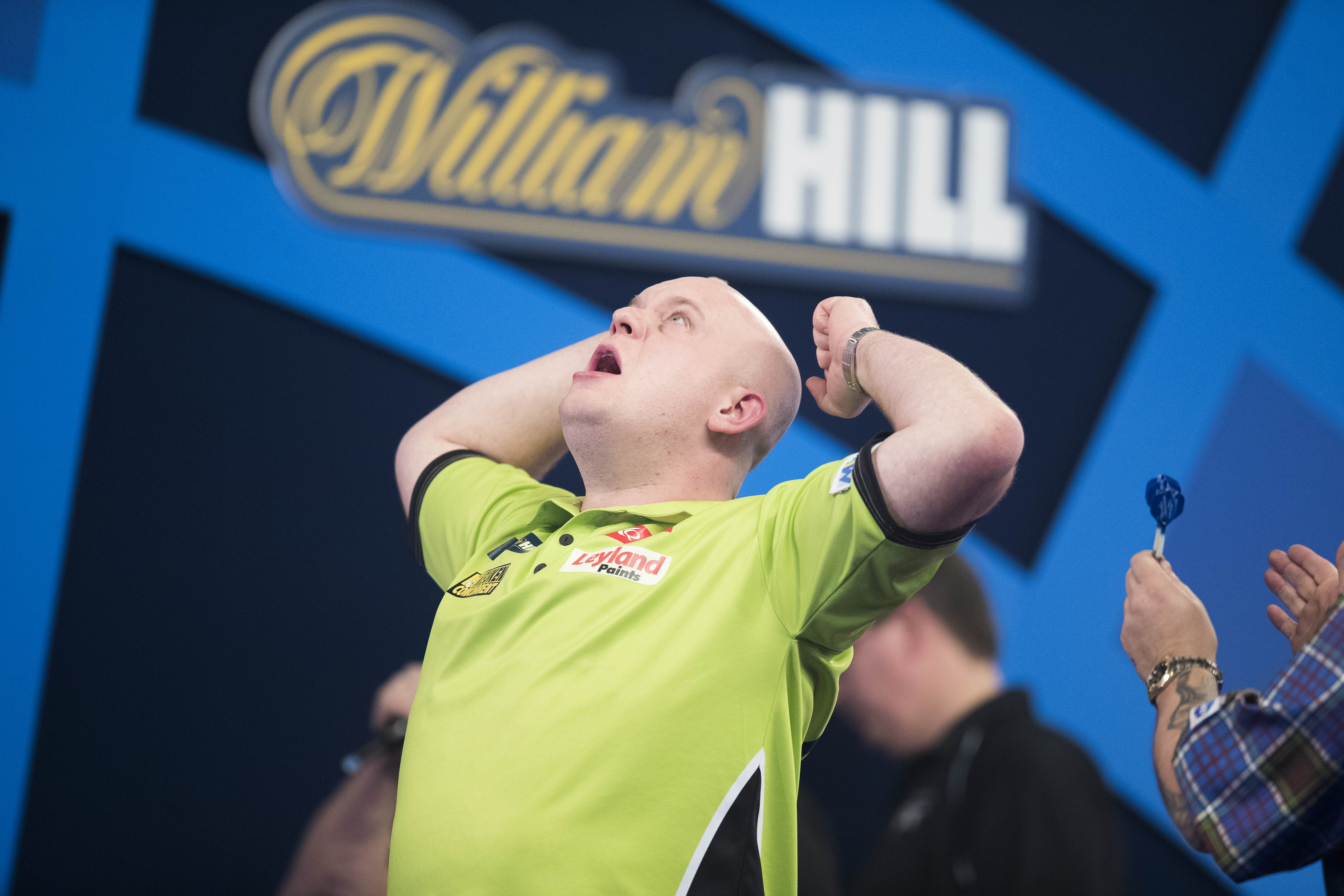 He may be widely known as The Power now, but Taylor was only still just a force in 1992, having landed his first world title two years previous.

The Stoke-on-Trent darter was the top seed as he reached his second final, where second ranked Gregory stood in his way at the Lakeside.

And Gregory set an unwanted record in this final, being the first player since the tournament was first introduced in 1978 to miss darts at a double to become world champion and go on to lose.

The number-two seed had initially recovered from falling 2-0 down in sets in a race to six to level the match and the game then remained on throw until the deciding set.

This is where Gregory blew his opportunity, not once, but on six occasions. He missed darts at double eight, double top and double 10 for the title.

Taylor was much more clinical when handed his chance, taking out 40 for victory.

A landslide victory was expected for Whitlock, with Hankey languishing at number 86 in the PDC rankings. Scoring just 27 with his opening three darts didn’t lift the spirits of supporters of The Count either.

Hankey was trying his best to upset the rhythm of his Australian opponent by playing up to the crowd and slowing removing his darts from the board, but this wasn’t proving overly successful, as he was soon 6-1 down in a race to 10 legs.

However, the mind games did seemingly begin to have an impact, as a collection of 140s helped to reduce the deficit to 6-5.

Hankey then led 8-7, before Whitlock missed three darts at 40 for a 9-8 advantage and the chance to throw first for the match.

The Aussie did make it 9-9, but the pressure appeared to swamp him in the deciding leg, failing to hit a treble in his opening nine darts. Hankey hit tops for one of the most unlikely of triumphs.

Gerwyn Price entered this event in the form of his life. He was looking to win his fourth consecutive PDC tournament and had won his last 17 matches. He’d taken back-to-back Players Championship events before winning the World Series of Darts Finals. Petersen was in a similar vein of form having reached a Players Championship final (losing to Price) and three semi-finals that year.

The Iceman dominated the opening salvo and sunk finishes of 110, 140 and 116 to pull away. At 5-1, it was looking as though Price was going to run away with it, but Petersen rattled off four consecutive legs to even-up the tie. It was a spectacular comeback with the African Warrior who had clearly hit a rhythm. Price had missed a match dart in the ninth leg, and it came back to haunt him as Petersen wrapped up an enthralling comeback. He managed to average 103 and hit eight 180s during the contest.

This win was made even better by the fact that Petersen went on to win the tournament, beating Johnny Clayton in the final and becoming the first-ever African to win a PDC title.

Bet on Darts with William Hill

Step up to the oche if you fancy betting on darts with William Hill, with a ton of darts markets available for numerous different tournaments throughout the year.

Click here to create a William Hill account; we’re offering new customers £30 in free bets when you bet £10 on any market.