Lingard, Foden and Grealish to make England’s Euro 2020 XI ahead of Sterling and Rashford?

Raheem Sterling and Marcus Rashford may well be mainstays in Gareth Southgate’s England team, but our research has revealed that Phil Foden, Jack Grealish, and Jesse Lingard should all start ahead of them at Euro 2020.

With this summer’s Euros fast approaching, England are seemingly inundated with potential attacking options, and our study has analysed what Southgate’s starting attack at the tournament should look like based on the leading hopefuls’ minutes per league goal contributions this season.

Unsurprisingly, Three Lions captain Harry Kane leads the way with his 30 goal contributions for Spurs coming at an average of every 78.9 minutes, ensuring him of his place as England’s central striker. Despite sitting fourth and sixth on the list respectively with goal contributions every 121.1 and 122.1 minutes, Newcastle’s Callum Wilson and Leeds’ Patrick Bamford must settle for the role of back-up strikers. 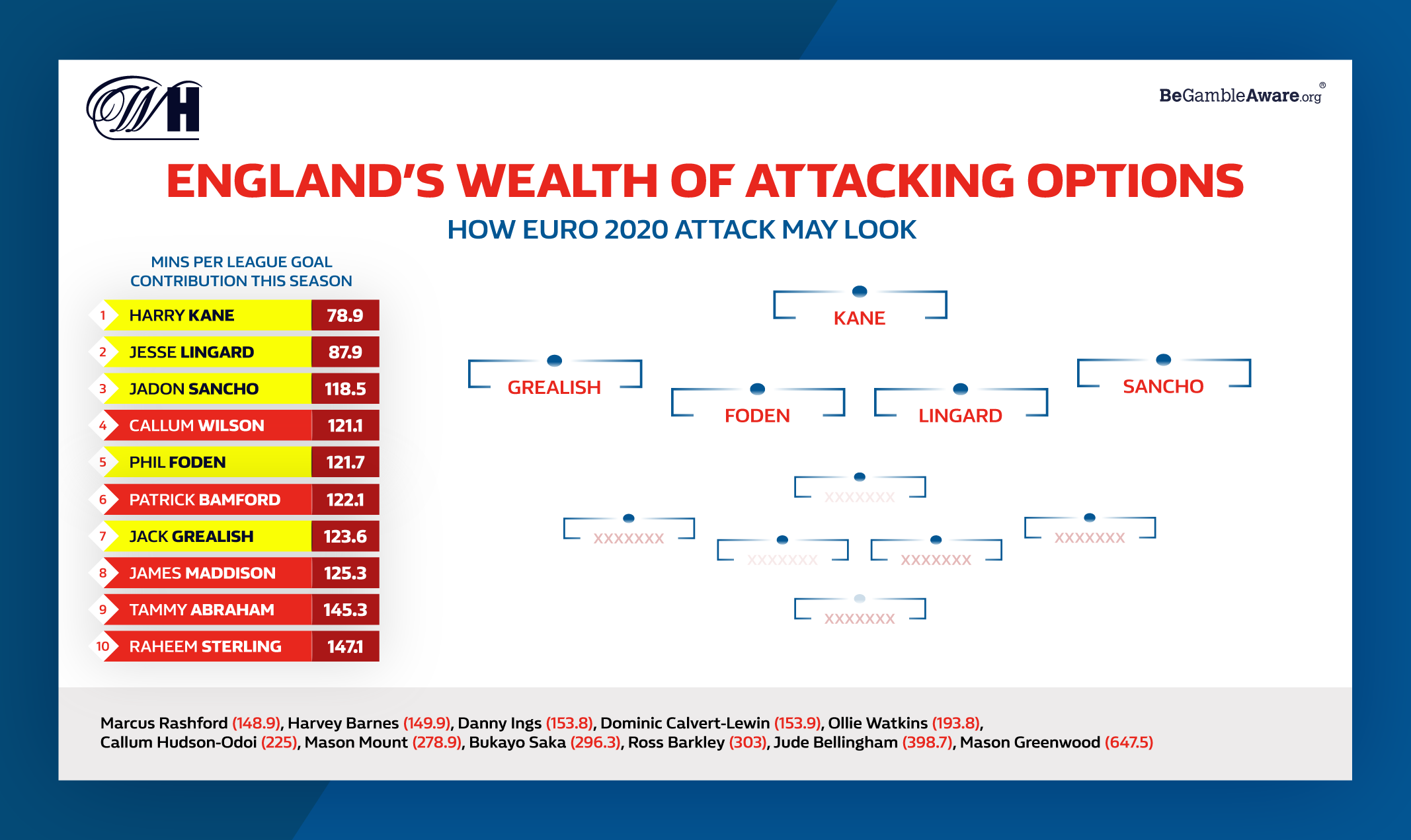 Sitting next in line after Kane and taking his place in an attacking midfield role is Lingard with a goal contribution every 87.9 minutes since joining West Ham on loan this season, while third-best performer Sancho secures his spot on the right wing thanks to a minutes per goal contribution ratio of 118.5 for Borussia Dortmund in the Bundesliga.

Joining Lingard in the middle is Foden with the Manchester City midfielder sitting fifth in the rankings due to a goal contribution every 121.7 minutes, and completing the attacking line-up with a role on the left is Aston Villa’s Grealish, who takes the last attacking spot thanks to his ratio of 123.6 minutes.

The study analysed 21 England hopefuls, with Three Lions regulars Sterling and Rashford surprisingly sitting in just 10th and 11th place respectively with goal contribution rates of 147.1 and 148.9. Judging by the research, Southgate might be forced to look beyond the two Manchester men this summer.