VAR in the Euros: Most Controversial Decisions Revealed

Few technological innovations have been quite as controversial as VAR, but the technology, and refereeing are among the unlikely highlights of this summer’s Euros.

Such was the European football governing body’s confidence in Video Assistant Referee (VAR) – being used for every single match at the tournament for the very first time – they went as far as issuing a pre-tournament statement that it would be of ‘great benefit’ and that ‘our VARs are the best in the world’, in what some people had inked down as a seminal moment for the beautiful game’s error-eradicating technology.

Like it or loathe it – as so many do – VAR is here to stay. And while many people point to its use at the Euros as having highlighted just how poor the technology’s implementation has been in the English Premier League, perhaps we must now transition to ensuring its accuracy.

One thing that has been clear during this summer’s Euros, is that there have been fewer controversies, less outrage, no game-defining errors and most importantly no lengthy VAR interruptions.

First introduced by the International Football Association Board (IFAB) in 2018, with the philosophy of ‘minimal interference, maximum benefit’, UEFA rolled it out in February 2019. Since then, it has featured in 453 matches through to the 2021 Champions League final, with 139 decisions changed – one in every 3.25 matches.

In the Premier League there is an intervention every 3.23 matches.

By comparison, the 22-strong VAR team based in Nyon, has changed just 18 decisions across the 51 matches, with an overturn frequency of 2.67, 17.84% less than the pre-tournament equivalent.

Reactionary metrics such as Tweet volume, text sentiment analysis, articles generated and associated levels of engagement have culminated in a bespoke, first-of-its-kind controversy rating being assigned to each overturn.

And it is Mario Gavranovic who can lay claim to the unenviable accolade of the most controversial VAR decision at this summer’s showpiece, with a rating of 6.63. 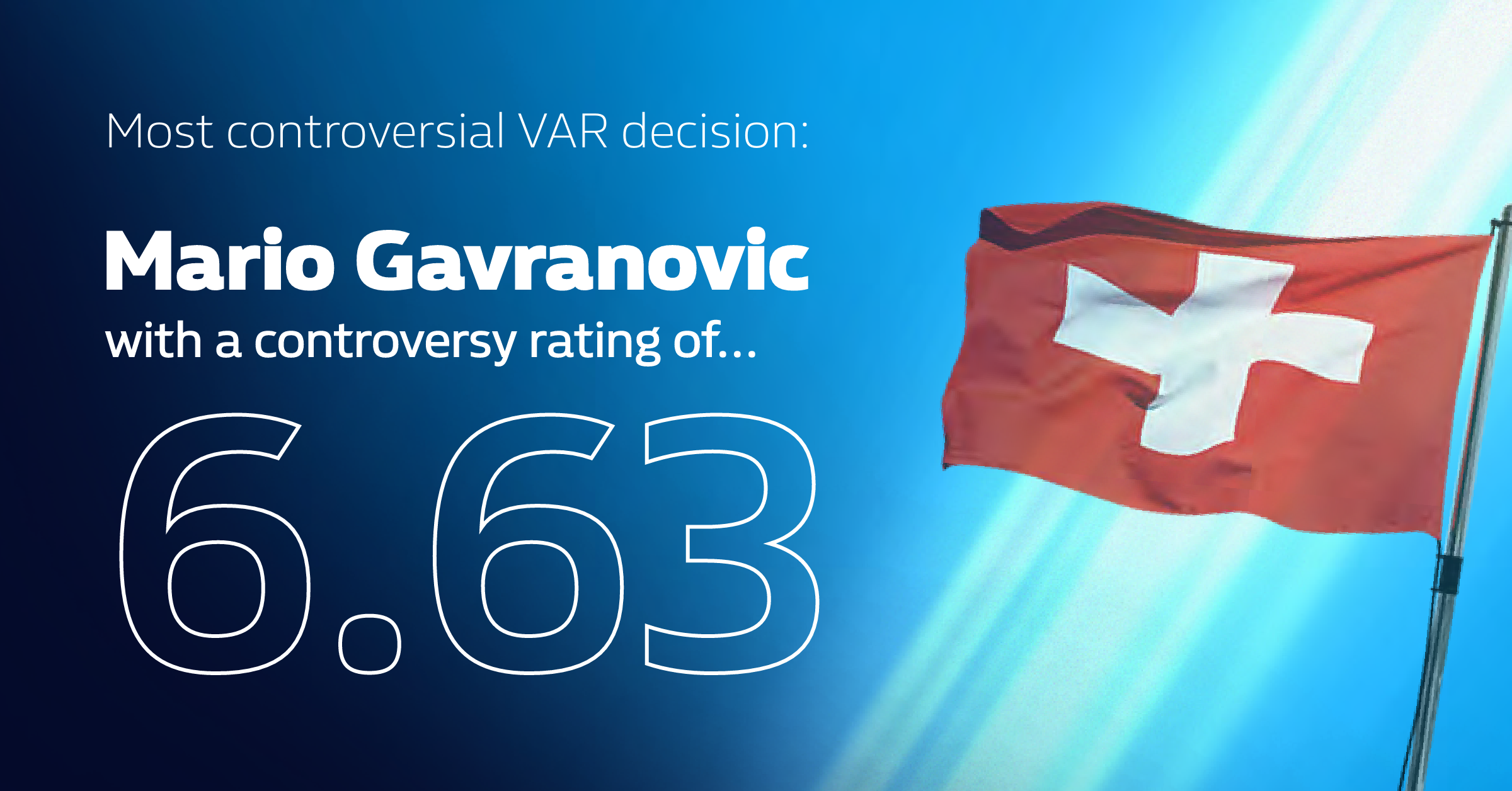 It proved to be one of six VAR reviews for offside in the group stages (with 21 tight offside calls looked at in total), but UEFA would later claim that offsides were “no longer an issue” and that they had an 100% accuracy on the subject.

The Swiss forward slammed home what he thought was the winner, only for VAR to rule him inches offside. The tension was unbearable for Welsh fans as Clément Turpin ruled offside on VAR official Jerome Brisard’s say-so.

Karim Benzema’s ruled out strike (6.0) for France in their 1-0 group-stage win over Germany too, was one of those clinically accurate offside calls by the VAR team. On this occasion Kylian Mbappe strayed just offside as part of a free-flowing counter.

Elsewhere, Matthijs de Ligt’s card upgrade to red for deliberate handball, in the Netherlands’ last 16 clash with Czech Republic was rated at 5.92.

All of these will do wonders for the technology’s reputation, the correct call arrived at on each occasion.

For wider context, and interwoven with the low-scoring calls, the tournament can proudly boast an average controversy rating of 4.40, making it 14.39% less controversial than the English Premier League.

Five of those 18 overturns led to goals, six led to the awarding of penalties (four of those missed), three goals were allowed after offside and six disallowed, there was one disallowed for handball, and two red cards brandished, as a result of the technology’s unobtrusive patrol.

In the group stages – 36 games in total – 179 incidents were reviewed with 12 VAR corrections actioned, five of those after on-field reviews. Most impressively though, was the efficiency with which they were dealt, 100 seconds the average time per intervention.

Confidence in the process was best evidenced when Benzema grabbed France’s second against Portugal and wheeled away in celebration. The flag went up. But just 29 seconds elapsed from the ball hitting the net to a voice in Antonio Lahoz’s ear telling him to award the goal. Time, now more than ever, is of the essence.

There were twice as many penalties (14) in the group phase compared to 2016, something UEFA accepts is down to VAR and its laser precision.

The British media wrote of VAR ‘rearing its ugly head’ for the first time at the tournament when Giorgio Chiellini was adjudged to have handled the ball in Italy’s clash with Switzerland. Its controversy rating was a mere 3.43. There’s something to be said for controversy being in the eye of the beholder.

The Premier League had two teams of officials at this year’s Euros and, although there are no radical changes afoot (thicker offside lines aside), their collective appraisals should prove insightful to Mike Riley and the referees’ body, as they look to restore some confidence of their own in VAR.