Ronaldo in all-time most decorated Premier League XI, but trails Pique and Giggs in trophy haul

Cristiano Ronaldo has made the cut for the all-time most decorated Premier League XI, but our research has revealed that the Manchester United forward will need to win a few more trophies to become the most successful player the division has ever seen.

Our study analysed players to have played in the Premier League across the years and the number of trophies they have won throughout their careers around the globe, with the most decorated making the starting line-up and substitutes’ bench.

Ronaldo, who will be looking to add to his honours during his second spell at United, has won a total of 34 trophies down the years to make the star-studded XI, though his record is bettered by former Red Devils Gerard Pique and Ryan Giggs, who have won 36 and 35 trophies respectively and both take their places in the side.

Former United goalkeeper Edwin van der Sar is first choice between the sticks due to the 26 medals won during his career, pipping another ex-Red Devils shot-stopper, Victor Valdes, to the post, who won 24 trophies. 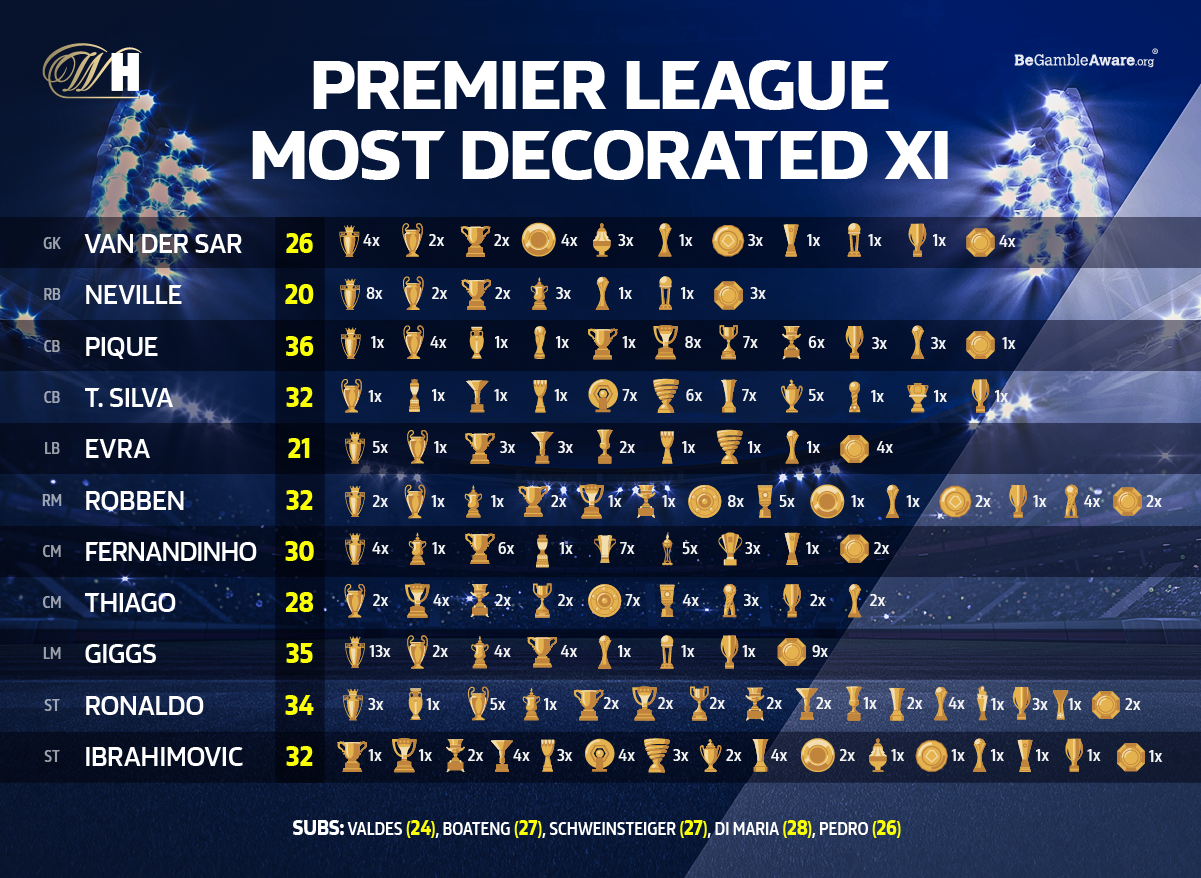 Partnering Pique in the heart of the defence is Chelsea centre-back Thiago Silva (32 trophies), while completing the back four are former United full-backs Gary Neville (20 trophies) and Patrice Evra (21 trophies) at right-back and left-back respectively.

Liverpool’s Thiago Alcântara (28 trophies) and Manchester City captain Fernandinho (30 trophies) sit in the centre of midfield, with Giggs on the left wing and former Chelsea attacker Arjen Robben (32 trophies) on the right, while completing the forward line alongside Ronaldo is ex-United striker Zlatan Ibrahimovic (32 trophies).

United’s influence on the team is clear to see, with the Red Devils boasting seven of the starting XI and 10 players overall in the 16-man squad. City and Chelsea both provide two players to the squad, while Liverpool have one. There are a total of 458 trophies won between the 16 players selected.