As is so often the case, the Caspian Caviar Gold Cup sees several runners who contested last month’s BetVictor Gold Cup return to Cheltenham for another go. But despite the surface similarities of the races, the percentage call is to avoid them from a win betting perspective.

This year, six runners who contested the November Meeting showpiece are back for seconds, including the first three home – Baron Alco, Frodon and Guitar Pete.

Rather Be (brought down four out), Splash Of Ginge (pulled up 11th) and Romain De Senam (a first-fence faller) join the BetVictor medallists in coming back for a second bite of the Prestbury Park cherry.

That sextet includes the first, second and joint-third in the Caspian Caviar Gold Cup betting at the time of writing, with Rather Be 3/1 favourite, from Baron Alco 13/2 and Frodon at odds of 9/1. 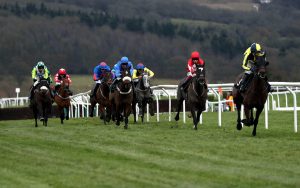 While the last two Caspian Caviar Gold Cup kings, Guitar Pete and Frodon, both contested the November race, the majority of those to land the odds in the handicap known as the December Gold Cup across the last 15 runnings did not.

Both the horses mentioned finished well down the field in the earlier race (ninth and tenth respectively) and that makes sense, given the handicapper has time to lift the marks of any who’d ran well, making it harder for them to win in December.

If any horses who contested the BetVictor Gold Cup in November are to win Saturday’s feature, it’s more likely to be those who didn’t complete.

Rather Be, sent off second favourite that day, runs off an unchanged official rating, while Splash Of Ginge and Romain De Senam have actually dropped down the weights ahead of Saturday’s race. 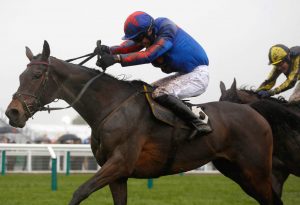 Splash Of Ginge and Tom Bellamy lead the field over the last fence before going on to win The BetVictor Gold Cup Handicap Steeple Chase Race.

Bet on all horse racing across the globe with William Hill

Which BetVictor swervers stand out in the Caspian Caviar Gold Cup betting?

War Sound and Mr Medic are shortest of those that didn’t contest last month’s race as 9/1 co-third favourites. The former has already seen the form of his Aintree handicap win last month franked by the fourth Warriors Tale, who won the Grand Sefton at the Merseyside track last weekend.

It was an easy win that belied the fact that it was his first over fences, coming at the ninth attempt. However, the handicapper has reacted by putting him up 10lbs.

At 16/1, Nigel Twiston-Davies’ Foxtail Hill is a horse that’s been going in the opposite direction, but has plenty of strong performances under his belt at Cheltenham, including off higher handicap marks.

Since finishing around 16-a-half-lengths in sixth behind Guitar Pete in last year’s Caspian Caviar Gold Cup off 147, he’s dropped 10lbs down the weights and is now 3lbs below his last winning mark.

That victory came over 2m at the Cotswolds track last October and he ran a decent race on his return in the same contest in 2018, which should have him nice and fit for this race.

Any doubts about his ability to score over longer trips need not be entertained either, given he beat the then-153-rated Saphir Du Rheu over the same course and distance as he will face on Saturday back in January 2017.